From undisciplined to interdisciplinary 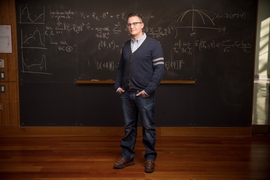 ↓ Download Image
Caption: Originally from the small town of Cluny, in the Burgundy region of France, Philippe Rigollet made the move to MIT in 2014. 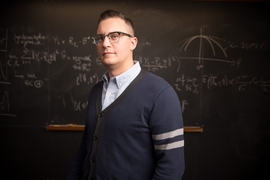 ↓ Download Image
Caption: Originally from the small town of Cluny, in the Burgundy region of France, Philippe Rigollet made the move to MIT in 2014.

Caption:
Originally from the small town of Cluny, in the Burgundy region of France, Philippe Rigollet made the move to MIT in 2014.

In 1996, when he was a high school senior in the small town of Cluny, in the Burgundy region of France, Philippe Rigollet applied to several of the two-year preparatory schools that most French students attend before moving on to university. His transcript reported a stellar math grade of 19.5 out of 20, but in the small space allotted for comments, his math teacher had written “fainéant.”

Rigollet translates that word as “slacker.”

“They were really looking for slackers in those preparatory schools,” Rigollet says. “They didn’t want people who were burned out at the end of high school and couldn’t push it, because it was much harder.”

“Slacker” is not an epithet that people tend to associate with MIT professors, and Rigollet was tenured in the Department of Mathematics last year. He is also part of MIT’s Institute for Data, Systems, and Society. But in high school, Rigollet says, “I was not very disciplined about learning stuff I didn’t want to learn.”

Fortunately, there’s a lot that he has wanted to learn. His work is notable for its interdisciplinarity, moving back and forth between the fields of statistics and computer science and bringing insights from each to the other.

Rigollet was born in a rural French town with a population of only 365. His mother was a speech therapist, and his father taught grades two through five at the local elementary school. The 30-odd students in those four grades shared a single classroom, and during math class, Rigollet’s father would pose questions to each group in turn.

“That’s where I got used to being good at math,” Rigollet says. “I would try to listen to the harder questions from the upper class.”

The community was predominantly agrarian — “Raising chickens was a big thing,” Rigollet says — but his parents had a side line in door-to-door sales of health, beauty, and home-care products for Amway. Starting when Rigollet was 4, the family would attend Amway workshops in the U.S. for a week or two almost every year.

“Going to the mall, having Taco Bell, it was just a dream for me.”

It also explains why, despite being educated entirely in France, Rigollet speaks such fluid, idiomatic English. “My first full sentence was ‘Can I have change for the game room?’” he says.

On the strength of his placement exams, Rigollet earned a spot at a prestigious preparatory school in Lyon, which specialized in math and physics. He still had difficulty making himself learn stuff he didn’t want to learn, however: He excelled in math, but in physics, “I was just getting by,” he says.

“In physics, the rules were set a little too strongly for me,” he says. “Math allowed you more to have your own proof or your own way of thinking. It’s funny, because some people look for structure in math, and I’m looking for freedom. In what I’m doing now, I choose the model I want, and I do the math I want, and I do the description I want of these things.”

In the French educational system, every university has its own set of grueling entrance exams, which can last two or three days. Because Rigollet was a “bursar of the state” — he received financial aid through the French government — he could take as many exams as he chose, for free. He took seven, which was “kind of unheard of,” he says. All were for technical schools.

“I ended up being admitted to the three that did not have physics in their exams,” he says.

One of those was the small and somewhat obscure Institute of Statistics of the University of Paris (ISUP). “I didn’t know what statistics was,” Rigollet says, “but for some reason, I really enjoyed the exam.” So that’s where he enrolled the following fall.

At the time, ISUP was essentially a professional school, training students for careers as actuaries and financiers. Rigollet assumed that that’s the direction his career would take, too, until the summer after his second year, when he accepted an internship with a company that consulted for the insurance industry.

“I quickly realized the consulting company I was working for figured out what I could do, set the bar about halfway there, and then asked me to do it twice as fast,” he says.

The next year, just as the curriculum took a more practical turn, with upper-level courses such as “Mathematics for Insurance,” Rigollet enrolled in a class that, as he puts it, “changed everything.” That class, “Nonparametric Statistics,” exposed him for the first time to the rich mathematical principles that underlay the comparatively limited set of statistical tools that his other classes had been training him to use. On the heels of his dispiriting internship, the class changed the direction of his academic career.

At the end of the year — his last, in the French system — instead of buying a suit and embarking on an actuarial career, he headed to the University of Paris VI to pursue a PhD in statistics.

After graduating, Rigollet won a three-semester postdoctoral fellowship to Georgia Tech, and in the last semester he began applying for academic jobs. He wrote a program in the typesetting language LaTeX to generate application letters, automatically pulling in data such as the positions advertised and the names of potential colleagues, and applied for 140 jobs. To his amazement, he was called back for 60 interviews.

He didn’t follow up on all of them, but he did end up with a job offer from Princeton University’s new Department of Operations Research and Financial Engineering, which he accepted. There he did what he describes as his best-known work, which imported concepts from theoretical computer science into statistics.

Many data sets of interest to researchers in a wide range of fields are “high dimensional,” meaning that each data point is characterized by hundreds, thousands, or even millions of different values. A million-pixel image, for instance, could be characterized as a single point in a million-dimensional space.

The trick is properly choosing the new dimensions. Some techniques for choosing them are provably optimal, but in practice, they’re much too time-consuming for many applications. More efficient techniques have also been developed, but they’re provably suboptimal.

Rigollet proved that for any but the smallest data sets, a set of sparse dimensions cannot be computed both efficiently and optimally: There is a tradeoff between the two notions. The proof required him to establish a theoretical cap on the accuracy of efficiently computable solutions. This set a new research agenda for the field, by giving statisticians a new standard to shoot for.

For a statistician with an interest in computer science, however, a department of operations research and financial engineering was never a perfect fit. So in 2015, Rigollet moved to MIT. There he has continued to pursue parallel research tracks in pure statistics and machine learning. Some of his earliest work at MIT concerned statistical methods that could be used to optimize both the design of clinical trials and the targeting of ads to web users. More recently, he’s been investigating statistical techniques for interpreting data produced by the imaging technique known as cryoelectron microscopy, whose inventors were awarded the 2017 Nobel Prize in Chemistry.

“I love so much being here now,” he says. “People at MIT are a bit different than elsewhere. They really are. They feel strongly about what they want to do, and there’s sort of this good peer pressure of doing interesting things. You don’t just want publications. You want work that you can actually talk to your colleagues about.”