Exploring the many roles of mucus 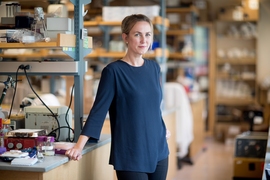 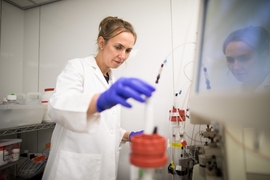 ↓ Download Image
Caption: Ribbeck gives talks at the MIT Museum and Boston Museum of Science about her work, and she is also working on a children’s book starring a shape-shifting character made of mucus, highlighting the many roles that mucus plays in our bodies.
Credits: Image: Bryce Vickmark

Caption:
Ribbeck gives talks at the MIT Museum and Boston Museum of Science about her work, and she is also working on a children’s book starring a shape-shifting character made of mucus, highlighting the many roles that mucus plays in our bodies.
Credits:
Image: Bryce Vickmark

In 2007, Katharina Ribbeck spent a year as a visiting scientist at Harvard Medical School. While there, she heard about a fellowship offered at Harvard that would provide the recipient with a lab, startup funding, and status as an independent investigator. The catch? Applicants had to propose starting a new field of study.

Up to that point in her career, Ribbeck had been studying the nuclear pore — a channel that regulates communication between a cell’s nucleus and the rest of the cell. However, she was intrigued by the idea of studying mucus, which lines an enormous surface area of our bodies and plays a key role in maintaining health, yet at that time was not well-studied.

“So, I made a case for mucus,” recalls Ribbeck, now an associate professor of biological engineering at MIT. “I said we should study mucus because it’s a really amazing barrier. It allows us to integrate nutrients, it protects us from pathogens, and it allows us to communicate with the outside world. It’s also a major obstacle to drug delivery. But we have no idea how it works."

Ribbeck got the fellowship, and ever since, she has been studying a substance that may have a high ick factor for some, but in reality is one of the most important defenses our body has against infection. Mucus also performs many other critical physiological functions, and by learning more about it, Ribbeck hopes to devise new ways to both diagnose and treat human disease.

“There is a lot of information about our health in mucus,” she says. “Our goal for the next couple of years is to tap into this underutilized source of bioinformation and use it.”

Looking at the big picture

Although Ribbeck’s parents were originally from Germany and Austria, she spent much of her early childhood in Guyana and Brazil, where her father worked as an urban planner. The family returned to Heidelberg, Germany, when Ribbeck was in elementary school.

As a student, she was interested in science but also spent much of her time in the library perusing art books. One of her favorites was E.H. Gombrich’s “The Story of Art,” which she says has heavily influenced how she does science — a process she describes as similar to creating an artistic composition.

“A single experiment is a small part of a bigger picture, and in doing science, you create a bigger picture that is coherent, well-balanced, striking but not misleading, that communicates the essence of what you discovered,” she says.

Mucus, she says, “was never on my radar in grad school,” but like mucus, nuclear pores also act as barriers. These pores are highly selective channels that allow some particles to pass through, while blocking others. Many nuclear pore proteins behave like hydrogels that form sticky network structures, almost like a spider web. This structure is similar to that of mucins, the molecules that make up mucus.

“If you take a few steps back, you see the nuclear pore is by no means the only filter that uses these gels. There is a whole class of materials that is based on very similar principles, where you have polymers that create meshes through which certain particles can pass through or not. Cartilage is another example; the extracellular matrix around tissues is another example,” Ribbeck says.

After finishing her PhD, Ribbeck planned to start a research group in Germany, continuing her studies of the nuclear pore. However, her plans changed when a friend at Harvard Medical School suggested that she spend a year working in his lab. The decision was not easy for Ribbeck, but as she says, “it’s the things you don’t do that you regret. So I decided to go there, anticipating an interesting but not really life-changing year.”

It was during that year, however, that Ribbeck applied for and received Harvard’s Bauer Fellowship to begin studying mucus. After about a year and a half, she realized that the field would benefit from the expertise and new tools being developed in MIT’s Department of Biological Engineering — in tissue science and engineering, microfluidics, and other areas. She got in touch with the department head, Doug Lauffenburger, and ended up joining the MIT faculty in 2010.

Among the questions Ribbeck has pursued is why mucus is so successful at “taming” microbes that are normally pathogenic. Part of the answer is that mucus can suppress certain functions in microbes so that they can’t form pathogenic aggregates called biofilms, which tend to be more harmful than the cells are individually.

Another major focus of her lab is analyzing how the stickiness and other biophysical properties of mucus change during illness, which could help researchers discover biomarkers that could be used to diagnose many different diseases. Last year, she published a study showing that changes in cervical mucus of pregnant women can reveal their risk of going into labor too early.

Other medical conditions that alter mucus include digestive diseases such as Crohn’s disease and ulcerative colitis, as well as respiratory diseases. The “holy grail” of this effort, she says, is to link changes in saliva composition with diseases that affect mucosal surfaces elsewhere in the body.

“If you have aberrant mucus production in your mouth, there is a chance that this is true for other parts of the body,” Ribbeck says. “So, we might be able to pick up, from saliva, disease conditions of remote mucosal surfaces. That will be very exciting because of course that is noninvasive yet informative.”

Ribbeck says that her research is a natural topic of interest for children, which she takes advantage of to get them excited about science. She gives talks at the MIT Museum and Boston Museum of Science about her work, and she is also working on a children’s book starring a shape-shifting character made of mucus, highlighting the many roles that mucus plays in our bodies.

“The intention here is to really introduce a field to the generations to come, so they grow up understanding that mucus is not a waste product. It’s an integral part of our physiology and a really important piece of our health,” Ribbeck says. “If we understand it, it can really give us a lot of information that will help us stay healthy and possibly treat diseases.”

Diana Kwon highlights the research of Prof. Katharina Ribbeck in an article for Scientific American about the biological benefits of mucus. “I like to call [mucus] the unsung hero of the body — it’s something that has such powerful effects over our health,” says Ribbeck.

Immune protection from an unexpected source