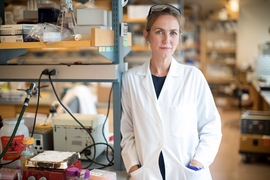 ↓ Download Image
Caption: “Our prediction is that we might be able to identify risk for preterm birth ahead of time, before labor sets in,” says Katharina Ribbeck, an associate professor of biological engineering at MIT and the senior author of the study. “Diagnostic tools for this are missing.”

Caption:
“Our prediction is that we might be able to identify risk for preterm birth ahead of time, before labor sets in,” says Katharina Ribbeck, an associate professor of biological engineering at MIT and the senior author of the study. “Diagnostic tools for this are missing.”

Up to 18 percent of babies born worldwide arrive before they are full-term, defined as 37 weeks of gestation. About 1 million of those babies do not survive, and those who do can face developmental problems such as impaired vision or hearing, defects in the heart or lungs, or cognitive impairments.

Currently there is no reliable way to predict whether a woman with a normal pregnancy will go into labor before 37 weeks. However, a study from MIT offers a new approach to evaluating this risk, by analyzing the properties of cervical mucus. The researchers found that cervical mucus from women who delivered their babies before 37 weeks was very different from that of women who delivered later.

This type of analysis could offer an easy way to calculate the risk of early labor, potentially allowing doctors to try to intervene earlier to prevent preterm births.

“Our prediction is that we might be able to identify risk for preterm birth ahead of time, before labor sets in,” says Katharina Ribbeck, an associate professor of biological engineering at MIT and the senior author of the study. “Diagnostic tools for this are missing.”

Ribbeck worked on the study with Michael House, an associate professor at Tufts University School of Medicine. MIT postdoc Kathryn Smith-Dupont is the first author of the paper, which appears in the Sept. 4 issue of Scientific Reports.

Ribbeck’s lab at MIT investigates the distinctive chemical and mechanical properties of mucus, and how those properties help it to perform many critical roles as part of the body’s first line of defense against infection.

Several years ago, Ribbeck began exploring whether changes in cervical mucus might play a role in preterm births. Between 25 and 40 percent of early births are believed to be caused by infections that occur when microbes reach the uterus through the cervical plug, which is made of mucus and normally blocks access to the uterus.

In a study published in 2013, Ribbeck found that cervical mucus from pregnant women at high risk of early labor was mechanically weaker and more elastic than that of low-risk pregnant women.

For the new study, she and her colleagues decided to investigate the mucus’s permeability to small particles. Mucus is formed from polymers known as mucins, and the composition and arrangement of these mucins determine how porous the gel is.

The researchers collected samples from two groups of patients. The low-risk group included pregnant women who came in to their doctors’ offices for routine visits around 30 weeks and ended up giving birth after 37 weeks. The high-risk group included women who went into labor early, between 24 and 34 weeks. Doctors were able to halt labor in these women, and the samples were taken after they were stabilized. They all ended up giving birth before 37 weeks.

The researchers tested the ability of negatively charged spheres about 1 micron in diameter to travel through the mucus, and found a small but statistically insignificant difference in porosity between the high- and low-risk samples. They then decided to do the same test with charged peptide probes, which are small enough to avoid getting stuck in the mucus network but are sensitive to the biochemical modifications of the mucus. With these peptide probes, the researchers found a significant differences in mucus permeability and adhesiveness: The peptides were able to pass through samples from high-risk women much more easily.

This suggests that cervical mucus from women at high risk for early labor, for reasons not yet known, may be more susceptible to invasion by potentially harmful bacteria and microbes, making it more likely that those women will experience an infection that leads to preterm birth, Ribbeck says. In addition, the altered mucus may be less able to retain helpful immune system components such as antibodies or antimicrobial peptides, which would normally help to combat infection.

“Mucins display all sorts of immunologically active factors that you may also lose when the adhesive properties change,” Ribbeck says.

She suspects that this loss of adhesion might be caused by changes in molecular structure of the mucins, in particular, changes in the number and types of sugar molecules that comprise part of their structure.

Currently, the most common way to try to predict the risk of preterm birth is to measure the length of the cervix, but although a shortened cervix is correlated with higher risk, there are also many cases where a shortened cervix does not lead to preterm birth. Another test involves measuring levels of fetal fibronectin, a material that essentially “glues” the fetal membranes to the uterine wall, in vaginal secretions. However, this is not a completely reliable predictor, and furthermore, women can deliver preterm when both cervical length and fetal fibronectin are normal.

“There’s no currently well-accepted universal test,” says Smith-Dupont. “The pathophysiology and mechanisms of preterm birth are extremely complex, and what works to assess one patient may not work for another.”

Ribbeck anticipates that cervical mucus testing could be done early in pregnancy, as part of a routine screen that would reveal whether a woman was at high risk of preterm birth. (This test would determine risk from infection, but not from other potential causes of early labor.)

Errol Norwitz, chairman of the Department of Obstetrics and Gynecology at Tufts Medical Center, who was not involved in the research, says the new study is an innovative approach to combating a problem that has so far proven intractable. Identifying women at high risk, and potentially giving their babies the chance to remain in utero for even a few extra days, could make a big difference, he says.

“Preterm birth is one of the biggest issues we face in child and baby health care around the world. It’s an enormous burden to individuals and families,” Norwitz says. “We sorely need a way to identify risk because all of the tools that we have now don’t work very well.”

Through studies of the chemical composition of the altered mucus, Ribbeck also hopes to develop new ways to restore the normal function of the mucus. “If the mucus is thinner or less adhesive than it naturally is, then we can begin to think about factors to add so that we improve its barrier properties,” she says.

Immune protection from an unexpected source