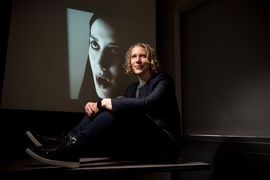 ↓ Download Image
Caption: Eugenie Brinkema, an associate professor of literature, is an expert on the formal properties of films: their use of light, color, sound, time, and other structural elements that convey sensations and ideas. In particular, she studies the techniques that make horror films and intense thrillers so gripping to so many viewers — while also grappling with the moral issues that arise in many of these movies.
Credits: Image: Bryce Vickmark 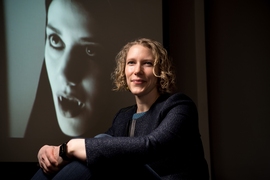 ↓ Download Image
Caption: Eugenie Brinkema, an associate professor of literature, is an expert on the formal properties of films: their use of light, color, sound, time, and other structural elements that convey sensations and ideas. In particular, she studies the techniques that make horror films and intense thrillers so gripping to so many viewers — while also grappling with the moral issues that arise in many of these movies.
Credits: Image: Bryce Vickmark

Caption:
Eugenie Brinkema, an associate professor of literature, is an expert on the formal properties of films: their use of light, color, sound, time, and other structural elements that convey sensations and ideas.
Credits:
Image: Bryce Vickmark

When a horror film reaches its most dramatic scenes, most people tense up. Eugenie Brinkema just keeps taking notes.

Brinkema, an associate professor of literature, is an expert on the formal properties of films: their use of light, color, sound, time, and other structural elements that convey sensations and ideas. In particular, she studies the techniques that make horror films and intense thrillers so gripping to so many viewers — while also grappling with the moral issues that arise in many of these movies.

“I am really interested in the ethics and the aesthetics of extremity,” Brinkema says.

After all, she says, in films depicting “wartime, or trauma, or being trapped in a room when it’s either you or me [as a victim], which is the premise of so many horror films, that moment of extremity brings to the surface how ethics work.” Such situations, she adds, are also when “interesting aesthetic solutions have to be devised.”

So, for instance, in the famous shower scene in Alfred Hitchcock’s “Psycho,” it may be the apparent tear rolling down Janet Leigh’s face that moves you. More likely, as Brinkema contends in her first book, “The Form of the Affects,” it is Hitchcock’s use of bright light that affects your emotions. Alternately, in a lowbrow horror film, the gory visuals may not grip your nervous system as much as the subtle use of dissonant sound. Either way, it may be the technical construction of a scene that most affects viewers.

So while Brinkema teaches literature to undergraduates and especially loves the writing of the existentialists, she most frequently rolls up her sleeves and decodes all manner of cinema — from “Psycho” and “The Shining” to “The Texas Chainsaw Massacre” and a recent French horror film called “Rubber” — including many films that lack critical respect.

“If it’s not under the radar, I often find it interminably boring,” Brinkema says. “The kind of cinema that wins at the Oscars … is the kind of body of work I rarely teach.”

“I grew up in the courtroom”

Brinkema is from Virgina, where her mother is a federal judge and her father worked in the judiciary. As she tells it, her long-term exposure to heavy-duty legal cases, and the extreme moments of human experience they represented, had a formative effect on her interests.

“I grew up in the courtroom,” Brinkema says. “I was always really, really interested in violence, justice, and problems of ethics.”

She adds: “If I were not a film theorist, I would be a public defender.”

As a graduate student, Brinkema studied psychoanalysis at the University of Buffalo for two years before moving to Brown University, where in 2010 she received her PhD in modern culture and media. Brinkema joined the MIT faculty as an assistant professor; for her research and teaching, she was awarded tenure at the Institute last year.

Brinkema’s research includes “The Form of the Affects,” published in 2014, which won honorable mention in the Modern Language Association First Book Prize; she has also published many articles. Brinkema is currently working on a new book, “Algebras of Sensation,” that further develops her work about the formal cinematic properties of both horror and love.

For her classroom efforts, Brinkema was awarded the James A. and Ruth Levitan Award for Excellence in Teaching in MIT’s School for Humanities, Arts, and Social Sciences (SHASS). In addition to teaching undergraduates in SHASS, Brinkema has helped advise students in the History, Theory, and Criticism of Architecture and Art program in the School of Architecture and Planning. And in another interdisciplinary venture, Brinkema wrote an article for the catalogue accompanying the contemporary art show “An Inventory of Shimmers,” which ran in 2017 at MIT’s List Visual Arts Center. She also helped organize a symposium about the show.

Given that Brinkema spends a relatively large portion of her time watching horror films and other kinds of challenging material, it raises a question: How does she manage to stomach what others find so difficult to watch? Brinkema says that’s an inquiry she often hears.

“I get versions of it from other academics and from my students,” she acknowledges. The answer, it turns out, involves being coolly analytical about the material. Horror films are, after all, fictions designed to elicit specific audience reactions, and focusing on the techniques they use produces a certain detachment.

“If you really watch for form, what you also start to see is that bodies are also forms,” says Brinkema. “A body in a horror film is also a problem of space or color. I’m not saying it [watching film this way] gets rid of violence, but it redefines it, so you can think with it, instead of only being horrified.”

To take a relatively tame example, Brinkema says, ask yourself, “How does the construction of architecture in ‘The Shining’ produce this experience of vertiginous disorientation and nausea and horror and terror? We could say, ‘Oh, I thought the horror was about the ‘Heeeeeere’s Johnny’ moment in the bathroom. But now, I think the horror [stems from] the problem of scale and perspective.’”

To be sure, it probably does help to have a sturdy stomach before enrolling in one of Brinkema’s film classes; she does not let students skip class sessions because they’re wary of the material. But as in any other course, Brinkema notes, she gives students a chance to explore the world: “I just encourage students to keep thinking, stay curious, and keep asking questions.”