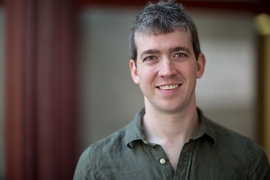 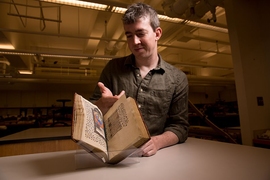 ↓ Download Image
Caption: Professor Bahr was photographed in the Libraries’ Wunsch Conservation Laboratory, with a 15th-century Book of Hours. The manuscript volume was donated to the Institute Archives and Special Collections by I. Austin Kelly (MIT 1926).
Credits: Photo: Bryce Vickmark

Caption:
Professor Bahr was photographed in the Libraries’ Wunsch Conservation Laboratory, with a 15th-century Book of Hours. The manuscript volume was donated to the Institute Archives and Special Collections by I. Austin Kelly (MIT 1926).
Credits:
Photo: Bryce Vickmark

At a fashion-industry dinner in New York last fall, a reporter asked various notables what books they were reading. The famed designer Vera Wang had a distinctive choice: “Fragments and Assemblages,” a book about reading practices in 14th-century London, by MIT literature professor Arthur Bahr — although, as Wang noted, the topic was “out of my comfort zone.”

Medieval literature is out of many people’s comfort zones, but Bahr specializes in putting people at ease with the subject, both as a scholar and a teacher. For instance, “Fragments and Assemblages” deduced that medieval readers browsed thorough texts on many topics, as we often do today, because manuscripts stitched together wildly disparate documents, from poems to legal treatises.

Bahr’s new book project is an analysis of the mysterious medieval manuscript containing the poems “Pearl” and “Sir Gawain and the Green Knight,” which he hopes will also make a variety of readers comfortable with these seemingly forbidding texts.

“My next book is very much going to be an invitation to readers,” says Bahr, the Alfred Henry and Jean Morrison Hayes Career Development Associate Professor of Literature. “I’m offering ways of reading the poems, rather than the definitive readings of them. The best compliment I can get is that my own work inspired someone to read the original work.”

When it comes to teaching, evidence of Bahr’s facility for making students at home in medieval times is scattered around his office — such as a box on the floor with a tale to tell. Last spring Bahr taught, at a student’s request, an introductory class in Old English, the difficult, Latin-like English precursor used from roughly the 5th century through the 12th century. Ultimately 23 undergraduates enrolled in the class — so many that he offered a second section of the seminar to meet the demand.

One day, after complaining about the chalk nubs at the blackboard in his classroom, Bahr found a wrapped package outside his office with Old English writing on it: “Ic eom blac, ac ne untrum/Ic eom stan, ac min dryhten strangra/Feower wraetlice wihta me healdan.” Roughly: “I am white, but not unfit/I am a stone, but my lord is stronger/Four remarkable beings hold me.”

Medieval writers loved riddles. So in this case, an anonymous undergraduate had bought oversized chalk sticks for Bahr and composed a medieval-style identity riddle (chalk is a white rock, and Bahr uses four fingers to hold it), leaving Bahr amazed at the enterprise involved.

“I defy any other institution to have students who are that into it,” Bahr says. “It’s just amazing.”

Or consider the projects students developed for Bahr’s “Legends of Arthur” class last fall, when he let students create visual artifacts analyzing Thomas Malory’s “Le Morte d’Arthur.” From a shelf in his office, Bahr pulls down a custom-made game board, complete with river, castle, and complex instructions, built by Laura Meeker ’14, a mechanical engineering and literature double major; the game rules stem from sequences in the text. Another student crafted a massive horizontal timeline charting the actions of characters, which Bahr spreads across the floor, pointing out some key junctures.

“Students here are so eager to make things, so you can come up with ways to activate that desire,” Bahr explains. He believes the close study of medieval literature — and the structure of Old English — have both intrinsic and eminently practical benefits.

“The skills that I’m trying to teach, and I think professors at MIT are trying broadly to teach, are ways of thinking and ways of engaging with the material,” Bahr says. “So what I care about is not just the content itself, but that students hone ways of analyzing or interpreting that content.”

Bahr grew up in St. Louis, where his father was an economist and his mother a language instructor. He became fascinated with medieval times at age 8, during a springtime trip to Wales, where the family explored castles and ruins.

“I think it just seized my imagination. … That was when I became interested in castles and King Arthur, at a young age,” Bahr says.

Bahr’s interest in teaching was evident at a young age as well. At 10, he asked for a miniature blackboard for Christmas, which he used to teach his younger sister — and her stuffed animals — math and other subjects.

“I even had office hours and graded homework,” Bahr recalls.

Meanwhile, Bahr also became an accomplished amateur figure skater. He stopped skating competitively in his late teens, but has stayed in the sport by judging figure-skating competitions. Most recently, in 2012, Bahr served as one of the judges at the U.S. Figure Skating Championships in San Jose, Calif., as a credential hanging on his office door attests.

To be sure, skating has remained secondary to scholarship. Bahr got his undergraduate degree at Amherst College and his PhD at the University of California at Berkeley, then landed his job at MIT. He was granted tenure as an associate professor last year.

Teaching at the Institute represents “the best of both worlds,” Bahr says, since he enjoys the intellectual interactions with students that typify a small-college environment, and appreciates the resources of MIT, which help him pursue an ambitious research agenda.

That research has included several published articles as well as “Fragments and Assemblages,” published in 2013 by the University of Chicago Press, which stemmed from Bahr’s dissertation research.

Whereas that book dealt with many manuscripts, his second book will be a little different: In this case, “Sir Gawain” and “Pearl,” along with two other poems, are part of a single 14th-century manuscript with an unknown author. “Pearl,” while less well known than “Sir Gawain,” is a more complex meditation on Christian ethics, in which a father whose child has died has a dream in which he discusses with her the meaning of life, love, and loss.

“Pearl is my favorite poem in the world,” Bahr says. “Its form is simply exquisite, and the story itself is very bittersweet.” The entire text, he adds, serves as “a useful reminder that seriousness of moral and theological purpose can coexist with vivacity and verve and fun.”

To work on his book, Bahr will be on leave in the coming academic year, as a Newhouse Faculty Fellow at Wellesley College. Still, he hopes to stay in touch with his students who want to continue their medieval studies — and to help new students, including those venturing outside their intellectual comfort zones, to experience that literary verve and fun as well.

Le Morte d'Arthur and the engineer