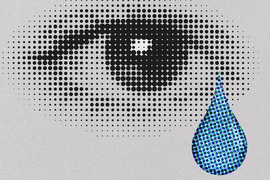 Caption:
Cover of "The Forms of the Affects" (Duke University Press) by Eugenie Brinkema

Near the end of the shower scene in “Psycho” — one of the most famous moments in film — the slain Marion Crane, played by Janet Leigh, lies on a bathroom floor. A drop of liquid rolls down her face.

Is it a tear? Or just a drop of water? How you answer that question — and cineastes disagree about it — helps determine how you interpret the scene: A tear would indicate the depth of feeling Crane had in her last moments, while a mere drop of liquid would indicate a refusal of emotional expression.

But to Eugenie Brinkema, an assistant professor of literature at MIT, this debate is misguided. As she writes in a new book about film and emotion, we should consider more seriously how director Alfred Hitchcock used a formal property of film — light — to produce the scene’s emotional effect.

“The tear is a visual element,” Brinkema says. “It’s a curve and shape; a distortion or culmination of pattern; a heaviness or a lightness of weight; a texture; a way of reflecting light.” Indeed, a visual hallmark of the “Psycho” shower scene is its bright lighting.

Brinkema suggests that cinematic light can give visual form to what she terms the “textual structure” of grief. From Hitchcock to the contemporary Austrian auteur Michael Haneke, she suggests, bright light powerfully displays “the disappearance of being and the raw affective state of death of the beloved” — a concept Brinkema also finds in the work of writers from Roland Barthes to Joan Didion.

What goes for grief, Brinkema argues, also applies to disgust, anxiety, and joy. Her book, “The Forms of the Affects,” published by Duke University Press, analyzes how the formal vocabulary of film supplies emotional intensities, and also reviews similar ideas as they apply to famous works of philosophy, psychoanalysis, and literature.

This is a departure from the way many scholars, over the last two decades, have grappled with art and emotion. Instead of analyzing bodies on the screen (people who display emotional cues) or in the theater (people who experience emotional reactions), which are now common points of entry into the topic, Brinkema argues that the often-subtle formal properties of film, such as light, line, and color, express the structure of emotions and indeed expand the aesthetic possibilities of film.

The anxiety of inference

Consider the concept of anxiety, which Brinkema’s book analyzes with relation to the 2003 film “Open Water.” Based loosely on a real-life incident, “Open Water” depicts an American couple left at sea by a scuba-diving charter, and concocts a scenario in which the husband is killed by sharks and the wife drowns herself to avoid the same fate.

“Open Water,” reviewers agree, is an anxiety-producing film. But what precisely generates that anxiety?

According to Brinkema, it’s not just that we are watching anxious people on screen, and it’s not really our fear of sharks. Rather, in “Open Water,” Brinkema argues, anxiety is a form of uncertainty related to our inability to control the future.

“Time and again, people like Kierkegaard and Sartre came back to a problem of anxiety that related to time, and as difficulty of movement in relation to time,” Brinkema says. “You feel stuck in place, paralyzed.” Or, as Kierkegaard wrote in “The Concept of Anxiety,” in 1844, “No matter how deep an individual has sunk, he can sink still deeper, and this ‘can’ is the object of anxiety.”

Relating this idea back to “Open Water,” Brinkema says, “The commonplace assumption is that spectators pay money to go to horror films because it will make us feel anxious, and then we cathartically leave the theater at the end of the day and feel fine. But what if [the film’s] anxiety has to do with the specific visual form of movement and time?”

Specifically, Brinkema thinks, the construction of anxiety in the film derives from the structure of its visual frame. As Brinkema writes in the book, “The essential visual form of ‘Open Water’ … involves the positing of a horizontal divisor” — the line between sea and sky. The film modifies this visual element so that, in time, this clean line between sea and sky will be the site of “visual transgressions,” as Brinkema writes, whether shark fins breaking above that line, or bodies disappearing under it.

‘I care about the little things’

Scholars at other institutions have responded positively to “The Forms of the Affects.” Karen Beckman, a professor of cinema and modern media at the University of Pennsylvania, has called the book an “important intervention” into cultural debates about affect in film, while noting that Brinkema draws upon “close readings of an impressive range of texts.”

Brinkema acknowledges that her argument is “something of a contentious move,” given the recent academic emphasis on “affected bodies” in discussions of art and emotion. However, she contends, “In film, we think we know things when we see them. But maybe that’s not true. Maybe the way disgust and anxiety and grief and joy work is not obvious, but requires that we really [grapple] with details.”

And by “slowing things down,” in her term — closely watching and rewatching films, and reading and rereading some noted texts — she has constructed a new hypothesis about art and its emotional jolts.

“I care about the little things,” Brinkema says. “Like the shape of the curve of something that may or may not be a tear. The wager of the book is that from those tiny aesthetic details, we can broaden out to questions about a very big topic, like emotion.”