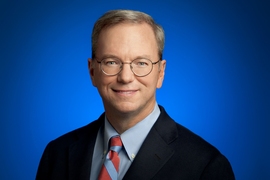 ↓ Download Image
Caption: Eric Schmidt (pictured), who until January was the executive chairman of Google’s parent company, Alphabet, will join MIT as a visiting innovation fellow for one year, starting in Spring.
Credits: Image: Dan Clark

Caption:
Eric Schmidt (pictured), who until January was the executive chairman of Google’s parent company, Alphabet, will join MIT as a visiting innovation fellow for one year, starting in Spring.
Credits:
Image: Dan Clark

Today, MIT President L. Rafael Reif announced that Eric Schmidt, who until January was the executive chairman of Google’s parent company, Alphabet, will join MIT as a visiting innovation fellow for one year, starting in Spring.

Schmidt will figure prominently in MIT’s plans to bring human and machine intelligence to the next level, serving as an advisor to the newly launched MIT Intelligence Quest, an Institute-wide initiative to pursue hard problems on the horizon of intelligence research.

“I am thrilled that Dr. Schmidt will be joining us,” says MIT President L. Rafael Reif. “As MIT Intelligence Quest seeks to shape transformative new technologies to serve society, Eric’s brilliant strategic and tactical insight, organizational creativity, and exceptional technical judgment will be a tremendous asset. And for our students, his experience in driving some of the most important innovations of our time will serve as an example and an inspiration.”

In his role as a visiting innovation fellow, Schmidt will work directly with MIT scholars to explore the complex processes involved in taking innovation beyond invention to address urgent global problems. In addition, Schmidt will engage with the MIT community through events, lectures, and individual sessions with student entrepreneurs.

“We are privileged to have Eric at MIT,” says MIT Provost Martin Schmidt. “The Institute aims to unlock innovations that today’s entrepreneurs have not even begun to dream about. Eric can help us move those efforts forward: his experience helping turn Google into the company it is today has given him insight of extraordinary power and value.”

While Schmidt was CEO of Google from 2001 to 2011, the company developed a reputation for innovation. It released products and services such as Google News, Blogger, Google Books, Gmail, Google Earth, and Google Maps. It also acquired YouTube and launched the Chrome web browser and the Android mobile operating system.

In 2011, Schmidt became Google’s executive chairman. He grew relationships with businesses, universities, and governments; Forbes described him as “Google’s global ambassador.” In 2015, Schmidt was appointed executive chairman of Alphabet. He resigned from that role last month but will remain an Alphabet board member and technical advisor.

Schmidt studied electrical engineering at Princeton before earning advanced degrees in computer science from the University of California, Berkeley. He honed his software skills at the legendary Xerox Palo Alto Research Center in California. As chief technology officer at Sun Microsystems, Schmidt helped develop the Java programming language before becoming CEO of Novell, and, finally, Google.

In a survey released in January by US News & World Report, Schmidt was ranked the most respected CEO among world business leaders. He remains vocal on the world stage; recently, he has advocated for increased government and private-industry investment in fundamental research.

“I have spent much of my career building corporations that could scale. AI represents the next great scalability platform,” says Schmidt. “Think of a platform of knowledge about everything. If you can’t use that to make the world a better place, you’re not paying attention.”

Tapping into the intelligence of MIT students, Schmidt says, will be a priority during his appointment. During a campus visit last spring, he advised students to find ways to pioneer innovations in emerging spaces in AI. “I want you to run at the next challenges,” he said. “I want you to figure out new algorithms, new technical approaches, and new hardware architecture.” He compared his early days at Xerox PARC with the atmosphere at MIT today. “When you get these collections of people in the same place with enough funding, they can make incredible things happen.”

MIT Dean of Engineering Anantha Chandrakasan looks forward to Schmidt’s arrival. “The Intelligence Quest will depend for its success on its ability to bring together extraordinary talent from academia and industry, and to energize it. We are very excited to have Eric help up as we define and drive new directions.”

As noted by the Associated Press, former Google CEO Eric Schmidt will be joining MIT as an innovation fellow beginning this Spring, where he will advise the recently launched MIT Intelligence Quest.