Former Secretary of Defense will work with students and researchers from School of Engineering and Sloan School of Management.
MIT Innovation Initiative
Publication Date:
Press Inquiries 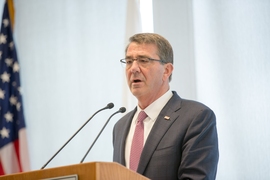 Former Secretary of Defense Ash Carter will join MIT as a visiting innovation fellow, working with researchers and students from the School of Engineering and the Sloan School of Management to put new ideas into action for the public good.

“At every step of his distinguished career, including most recently as Secretary of Defense, Ash Carter has been an innovator,” says MIT President L. Rafael Reif. “The MIT community will benefit immensely from his interest in and gift for working with young people, and be inspired by his conviction that technology and innovation can be central to solving humanity's toughest challenges.”

"I am pleased to continue my long relationship with MIT and its technologists, many of whom supported our mission at the Department of Defense," Carter says. "I share MIT's longstanding commitment to making a better world through technology and through training and inspiring the next generation. This fellowship is a welcome opportunity to continue to work with the excellent researchers and students at the Sloan School and the School of Engineering, and reconnect with the vibrant Boston technology community.”

Visiting innovation fellows are part of MIT’s Innovation Initiative, which collaborates with all five schools at the Institute to equip the MIT community and its partners to move entrepreneurial ideas from conception to impact.

Visiting innovation fellows are drawn from policy, corporate, risk capital, and entrepreneurial settings. They engage with the MIT community by convening events, lectures, and student meetings. Past innovation fellows have included Bob Metcalfe ’68, who co-invented Ethernet and co-founded 3Com, and Deval Patrick, the former governor of Massachusetts.

Carter knows MIT well, having served as an MIT postdoc early in his career and, more recently, on the advisory board at MIT’s Lincoln Laboratory. As Secretary of Defense, Carter visited MIT in December 2015 to discuss innovation in industries such as health care, biotechnology, and energy. He returned to campus last April to speak with students, visit the MIT Media Lab and Broad Institute, and to announce that an independent nonprofit founded by MIT had been selected to run a $317 million public-private partnership, the Advanced Functional Fabrics of America Institute, to accelerate innovation in high-tech, U.S.-based manufacturing involving fibers and textiles.

“Ash Carter has emphasized the critical role of innovation in foreign policy and national security,” says Fiona Murray, associate dean for innovation at the MIT Sloan School of Management, co-director of the MIT Innovation Initiative, and the William Porter Professor of Entrepreneurship. “His introduction of novel models of bridging industry, university, and government stakeholders has advanced military efforts in many technical domains. We are looking forward to giving our students the opportunity to learn from his extensive experience.”

As Secretary of Defense, Carter made innovation a priority. He opened Defense Department outposts in tech hubs such as Boston and Silicon Valley, in order to strengthen connections between leading private sector companies and the government and military. He promoted new investments in technology; opened up all military positions to women without exception; and, through the Force of the Future initiatives, transformed the way the Defense Department recruits, trains, and retains high-quality employees.