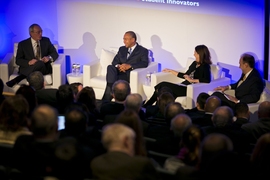 Former Massachusetts Gov. Deval Patrick will become a visiting fellow at MIT this spring, engaging with the Institute community on issues at the intersection of policymaking, entrepreneurship, and innovation-based growth.

Officially, Patrick will be a visiting innovation fellow at the MIT Innovation Initiative. As part of his role, Patrick will make regular appearances at campus events, including seminars with students and faculty. He will also have formal office hours.

“Innovation is the fuel of our economy,” Patrick says. “Massachusetts’ inventors and innovators, many of whom have come out of MIT, have worked with business and government leaders to make the Commonwealth a leader in many industries. I am honored to join this esteemed Institute and contribute to this new initiative.”

The MIT Innovation Initiative provides formal cross-campus organization and a corresponding set of programs expanding the Institute’s capacity to contribute to global innovation. It aims to enhance MIT’s “innovation infrastructure” by accelerating the process for moving basic research out of the lab and into the market.

In practice, this can mean creating partnerships among academia, industry, and government — an approach that is increasingly endorsed by empirical research. Such partnerships may spur growth and help develop innovation “ecosystems” and “hubs,” or regions of excellence in particular industries, which have been shown to accelerate economic gains.

MIT President L. Rafael Reif says he welcomes Patrick’s presence on campus as a means of promoting a productive dialogue between policymakers and innovators.

“In leading the Commonwealth, Governor Patrick took the time to educate himself about how fundamental science produces world-changing technologies, and about the kind of government policies that help innovation flourish,” Reif says. “His personal commitment to these issues has made a tremendous positive difference, and we are delighted that he will join us in educating our students in turn.”

Fiona Murray, the Bill Porter Professor of Entrepreneurship and associate dean for innovation at the MIT Sloan School of Management, says she looks forward to having Patrick share his ideas with the Institute’s students and faculty.

“Governor Patrick has been an international innovation diplomat for Massachusetts and can speak to the important role of government in fostering innovation,” Murray says. “We welcome his insights.”

The MIT Innovation Initiative, led by Murray and Vladimir Bulovic, the Fariborz Maseeh Professor of Emerging Technology and associate dean for innovation in MIT’s School of Engineering, also extends programs for developing entrepreneurship as a set of skills for students, faculty, staff, and alumni.

In his two terms as Massachusetts governor, beginning in 2007, Patrick delivered an economic policy address at MIT; participated in groundbreaking ceremonies for multiple businesses in Kendall Square; and spoke at symposia on the life sciences and the environment. Patrick also delivered MIT’s 2009 Commencement address, telling graduates, “Your ideas and contributions will defy prediction.”

Massachusetts has enhanced its position as a global leader in a variety of advanced industries in recent years, from biotechnology and information technology to medical devices. The state government has provided an array of programs and incentives to spur growth across many of these fields.

According to the Associated Press, “former Massachusetts Gov. Deval Patrick has signed on to be a visiting fellow at the Massachusetts Institute of Technology.” Patrick, who left office after two terms, will be joining MIT’s Innovation Initiative.

Boston Globe reporter David Scharfenberg writes that Gov. Deval Patrick has joined the MIT Innovation Initiative. Associate Dean for Innovation Fiona Murray explains that “having the right kinds of policies and programs in place to enable people to actually be effective innovators and entrepreneurs really matters.”

Dennis Keohane of BetaBoston writes that Gov. Deval Patrick will be joining the MIT Innovation Initiative as a visiting innovation fellow. “The role entails Patrick taking part in a variety of events on MIT’s Cambridge campus, engaging with students and faculty on issues such as policymaking, entrepreneurship, and innovation-based growth,” writes Keohane.

Former Massachusetts Governor Deval Patrick has accepted a position as a visiting fellow with the MIT Innovation initiative, reports Matt Stout of the Boston Herald. “We want to think through with the governor, what are the big issues shaping the innovation economy?” says Professor Fiona Murray, associate dean for innovation.

'Write the next chapter'