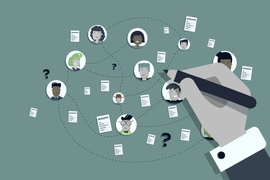 ↓ Download Image
Caption: MIT political scientist In Song Kim has overseen the launch of LobbyView.org, a website that connects the activities of lobbyists, firms, and politicians, so that people “can understand how legislative politics [actually] works in the U.S.,” as Kim puts it.
Credits: Image courtesy LobbyView.org 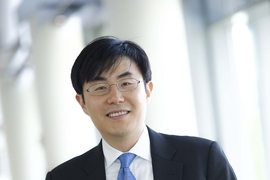 Caption:
MIT political scientist In Song Kim has overseen the launch of LobbyView.org, a website that connects the activities of lobbyists, firms, and politicians, so that people “can understand how legislative politics [actually] works in the U.S.,” as Kim puts it.
Credits:
Image courtesy LobbyView.org

Caption:
In Song Kim, the Class of 1956 Career Development Associate Professor of Political Science at MIT.
Credits:
Image courtesy of In Song Kim

Follow the money. It’s a famous phrase from the Watergate era, but it applies to everyday life in modern Washington as well. That advice just got easier for everyone to carry out, thanks to the launch of LobbyView.org, a new public database created by MIT political scientist In Song Kim.

LobbyView.org has 1.2 million public records of congressional lobbying, and a flexible interface designed to make research simple. MIT News spoke with Kim, the Class of 1956 Career Development Associate Professor of Political Science, about the project.

Q: What is LobbyView.org, and how did you create it?

A: LobbyView.org is a publicly available online database where researchers and journalists and others who are interested in politics will be able to search the universe of the political activities that have been filed and reported, so that they can understand how legislative politics, especially, works in the U.S. For example, people can easily search how, and to what extent, firms engage in political activities.

There is a legal requirement that any lobbyist or lobbying firm representing clients disclose lobbying activities performed on behalf of those clients. Such information has been available in the form of lobbying reports that are filed quarterly.  Currently there are more than 1.2 million reports that have been filed since 1999. I downloaded the files from the Senate Office of Public Records and then developed a program to automatically parse those reports. LobbyView enables users to easily search and download a massive amount of lobbying data based on firms’ names, content of lobbying, legislative bills, and politicians’ names. So researchers can examine how private interests are reflected in actual policymaking and which political networks dominate legislative politics in certain issue domains.

Q: How does this relate to your research, which often focuses on international trade?

A: My work on trade politics motivates the whole data collection, because I realized the U.S. is setting trade policies at a very fine-grained product level. Each product gets different policies, reflecting different interests, as we see from the recent trade wars between China and the U.S. … I started looking at why they differ and recognized that firms are lobbying on specific products. The general pattern we see is that there are more than 12,000 bills that are introduced in each Congress. The majority of those bills are lobbied, and, interestingly, lobbied by one or two groups.

The dominant theory in international political economy has been that industry-level lobbying has been driving trade politics. However I found there is significant variation at the firm level, even when firms belong to the same industry.

It’s been difficult to study firms’ political activities, and policymakers won’t necessarily disclose that they have met with lobbyists to discuss legislation, even though we all know this is an important part of how K Street [where many lobbying firms in Washington are located] works. So LobbyView.org is designed to increase transparency based on publicly available information, establishing links among firms, lobbyists, and politicians.

Q: Having now publicly launched LobbyView.org, what are the next steps for using it, beyond your own research?

A: I am trying to incorporate this in teaching at MIT, in the class that I created last semester, 17.835 (Machine Learning and Data Science in Politics). The idea is that a lot of MIT students have various technical skills to analyze and visualize data in general. What I’m trying to do is bring these data into class, so students can learn about politics using data. This is a nice application of big data analysis, where you can use automated data collection and apply algorithms to identify patterns, and this opens the door for a lot of interesting research. Various students have been involved in this project through UROP [MIT’s Undergraduate Research Opportunities Program], or through group projects in the class. And I’m looking forward to expanding this database to cover campaign contributions in electoral politics, so money in politics can be further studied by researchers and students at MIT.