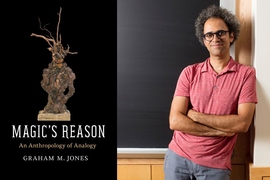 In 1856, the famous French magician Jean Eugène Robert-Houdin went on an unlikely government mission: a trip to Algeria, which France was colonizing. Among other things, Robert-Houdin studied rituals in which marabouts, local religious figures, performed conjuring tricks and dazzled audiences by displaying seemingly supernatural powers.

Robert-Houdin then wrote dismissively about these performances for the French public, calling the marabouts “false prophets” who were “igniting the fanaticism of their coreligionists with the help of conjuring tricks as primitive as the audiences for whom they are performed.” Robert-Houdin failed to grasp the religious significance of these rituals, but his writing helped infuse into public life an image of Algerians as irrational people, fit for subjugation.

Why was Robert-Houdin filling the unusual role of cultural interpreter? For one thing, he was a celebrity who helped turn magic performances into mass entertainment. (“Harry Houdini,” the stage name of American magician Erich Weiss, was a reference to Robert-Houdin.)

But more specifically, Robert-Houdin achieved his renown by championing himself as a skeptical rationalist, someone whose craft was based on logic and skill, and who could expose the tricks of mediums, shamans, seers, and others.

“Robert-Houdin built his reputation as the founding father of modern magic precisely by distancing the trickery he performed from explicit reference to the occult or supernatural,” says MIT anthropologist Graham Jones. “For him, magic was an entertainment totally aligned with a scientific and mechanistic view of the world, and hostile to the kinds of supernatural meanings he saw in Algerian rituals.”

Prominent magicians since then have often cast themselves as defenders of rationalism as well. But as Jones shows in his newest book, “Magic’s Reason,” published by the University of Chicago Press, Robert-Houdin did more than just influence his profession or serve the French empire: His ideas bled into the embryonic discipline of anthropology as well.

Early anthropologists, as Jones makes clear, often focused on religious figures, whose ceremonies they likened to the deceptive tricks of magic acts. Indeed, both Robert-Houdin and the founding British anthropologist Edward Burnett Tylor even wrote about some of the same performers. And Tylor, who called the belief in magic “one of the most pernicious delusions that ever vexed mankind,” was also an ardent champion of what he saw as the superiority of European rationalism.

“Robert-Houdin and Tylor both contributed actively to the ideological apparatus of Western imperialism, helping articulate a rationale for colonialism in terms of the cognitive supremacy of rational, modern Euro-Americans whom they compared to irrational, non-modern others,” Jones writes in “Magic’s Reason.”

As such, Jones’ book is many things at once: a new look at the golden era of magical entertainment, an intellectual history of European thought at a peak moment of empire-building, and a challenge to anthropologists, asking today’s scholars to think critically about the origins of their discipline.

These interconnected elements all link to the central point that magic is one of the most important concepts in anthropology. It is not as prominent as the encompassing notion of “culture,” but time and again, anthropologists have used the puzzle of why people believe in shamans, fortune-tellers, priestly figures, and others who claim to offer magical abilities as the key to understanding culture. In so doing, scholars assert a special ability to decode the beliefs of others.

“Magic as a world-view has been a major preoccupation for anthropologists,” Jones explains. “Magic as a mode of thinking, and here we’re talking about one specific kind of magic: occult magic, instrumental magic, magic as a supernatural form.”

And Tylor, author of the influential 1871 book “Primitive Culture,” was not just making cross-cultural comparisons when he examined magic, but continually asserting that European culture had advanced farther than the backward, magic-infused societies on other continents. The belief in magic, Tylor wrote, belonged to “the lowest known stages of civilization, and the lower races.”

Both Robert-Houdin and Tylor wrote about an American magician duo, the Davenport brothers, who toured Europe in the 1860s giving quasispiritual performances that were a hybrid of magic acts and séances. Robert-Houdin wrote an 1865 article debunking their act; Tylor, in “Primitive Culture,” compared the brothers to shamans, and wrote that their act was like a “trick performed among savages” in far-off lands.

This overlap was not just coincidental, Jones says; it was crucial to the formation of anthropological thought.

“The modes of debunking supernatural beliefs that stage magicians pioneered and promulgated were not only complementary to the attitudes of disdain that anthropology exhibited toward the supernatural, but I think they provided a basis for the ways that anthropologists reasoned about magic and, by extension, culture,” Jones says.

That connection remained intact for subsequent generations of magicians and anthropologists, Jones suggests, making it all the more important to understand the roots of the intellectual relationship. Magicians and anthropologists, Jones adds, were long “embedded in this broader cultural milieu,” in which they were “asserting authority in the context of colonial projects by claiming mastery over the magic of colonized peoples.”

Jones’ book is his second. The first, “The Trade of the Tricks,” from 2011, explored the present-day world of Parisian magicians from an anthropological viewpoint. For that book, Jones developed his own act, immersed himself in the Paris magic scene, and befriended magicians, for whom the likes of Robert-Houdin still loom large.

Indeed, as Jones saw firsthand, contemporary performers often still regard themselves as bearers of rational thought and debunkers of the irrational. That posture empowers magicians to fight against charlatans and other malign deceivers. Still, he adds, it’s important to think about the multiple ways self-appointed “rational” thinkers go about applying the label of “irrational,” particularly to other cultures.

And if readers learn some history about the many linkages between magic, anthropology, and claims of cultural superiority, Jones says, his book will have succeeded.

“By looking at the history of the concept of magic, we can see how cultural assumptions have complex and potentially insidious ways of becoming enfolded in scientific ideas that anthropologists, and others, use,” Jones says.

Pulling back the curtain