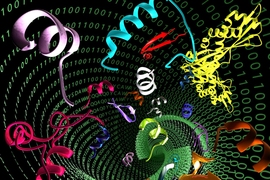 During the past several years, many strains of bacteria have become resistant to existing antibiotics, and very few new drugs have been added to the antibiotic arsenal.

To help combat this growing public health problem, some scientists are exploring antimicrobial peptides — naturally occurring peptides found in most organisms. Most of these are not powerful enough to fight off infections in humans, so researchers are trying to come up with new, more potent versions.

Researchers at MIT and the Catholic University of Brasilia have now developed a streamlined approach to developing such drugs. Their new strategy, which relies on a computer algorithm that mimics the natural process of evolution, has already yielded one potential drug candidate that successfully killed bacteria in mice.

“We can use computers to do a lot of the work for us, as a discovery tool of new antimicrobial peptide sequences,” says Cesar de la Fuente-Nunez, an MIT postdoc and Areces Foundation Fellow. “This computational approach is much more cost-effective and much more time-effective.”

Antimicrobial peptides kill microbes in many different ways. They enter microbial cells by damaging their membranes, and once inside, they can disrupt cellular targets such as DNA, RNA, and proteins.

In their search for more powerful, artificial antimicrobial peptides, scientists typically synthesize hundreds of new variants, which is a laborious and time-consuming process, and then test them against different types of bacteria.

De la Fuente-Nunez and his colleagues wanted to find a way to make computers do most of the design work. To achieve that, the researchers created a computer algorithm that incorporates the same principles as Darwin’s theory of natural selection. The algorithm can start with any peptide sequence, generate thousands of variants, and test them for the desired traits that the researchers have specified.

“By using this approach, we were able to explore many, many more peptides than if we had done this manually. Then we only had to screen a tiny fraction of the entirety of the sequences that the computer was able to browse through,” de la Fuente-Nunez says.

In this study, the researchers began with an antimicrobial peptide found in the seeds of the guava plant. This peptide, known as Pg-AMP1, has only weak antimicrobial activity. The researchers told the algorithm to come up with peptide sequences with two features that help peptides to penetrate bacterial membranes: a tendency to form alpha helices and a certain level of hydrophobicity.

After the algorithm generated and evaluated tens of thousands of peptide sequences, the researchers synthesized the most promising 100 candidates to test against bacteria grown in lab dishes. The top performer, known as guavanin 2, contains 20 amino acids. Unlike the original Pg-AMP1 peptide, which is rich in the amino acid glycine, guavanin is rich in arginine but has only one glycine molecule.

These differences make guavanin 2 much more potent, especially against a type of bacteria known as Gram-negative. Gram-negative bacteria include many species responsible for the most common hospital-acquired infections, including pneumonia and urinary tract infections.

The researchers tested guavanin 2 in mice with a skin infection caused by a type of Gram-negative bacteria known as Pseudomonas aeruginosa, and found that it cleared the infections much more effectively than the original Pg-AMP1 peptide.

“This work is important because new types of antibiotics are needed to overcome the growing problem of antibiotic resistance,” says Mikhail Shapiro, an assistant professor of chemical engineering at Caltech, who was not involved in the study. “The authors take an innovative approach to this problem by computationally designing antimicrobial peptides using an ‘in silico’ evolutionary algorithm, which scores new peptides based on a set of properties known to be correlated with effectiveness. They also include an impressive array of experiments to show that the resulting peptides indeed have the properties needed to serve as antibiotics, and that they work in at least one mouse model of infections.”

“A report commissioned by the British government estimates that antibiotic-resistant bacteria will kill 10 million people per year by the year 2050, so coming up with new methods to generate antimicrobials is of huge interest, both from a scientific perspective and also from a global health perspective,” de la Fuente-Nunez says.

The research was funded by the Ramón Areces Foundation and the Defense Threat Reduction Agency (DTRA).