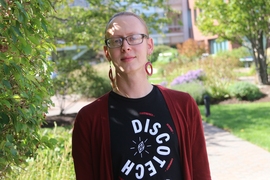 Not every technology platform or tool you use, or website you visit, comes straight from a startup or Silicon Valley. Many are developed by nonprofits, government agencies, or advocacy groups practicing community technology, technology for social justice, or “public interest technology.” What can we learn from these community-engaged technology practitioners? How can organizations that work for equity achieve the diversity they often advocate for in society?

Sasha Costanza-Chock, an associate professor in Comparative Media Studies/Writing at MIT, is the lead author of a new report, titled “#MoreThanCode: Practitioners reimagine the landscape of technology for justice and equity,” which delves into these issues. The report distills 109 interviews, 11 focus groups, and data from thousands of organizations into five high-level recommendations for those who want to use technology for the public good. (The report was funded by NetGain, the Ford Foundation, Mozilla, Code for America, and OTI.) MIT News sat down with Costanza-Chock to talk about the report and its recommendations.

Q: Who are the practitioners in this tech ecosystem?

One of our key recommendations is that when funders and organzations — be they city governments or nonprofits or for-profit companies — are putting together teams, they need to think broadly about who is on that team. We found that a good team to develop technology that’s going to advance social justice or the public interest is going to include software developers, graphic designers, researchers, and domain [subject] experts. Domain experts might have formal expertise, but the most important team member is someone with lived experience of the particular condition that technology is supposed to address.

Q: On that note, can you say a little about the current state of social diversity in this sector?

A: Certainly. One of our key goals in the report was to produce baseline knowledge about who’s working in public interest technology. And unfortunately, in terms of hard data, the main finding is that we don’t have it, because many organizations in the space have not published diversity and inclusivity data about who their staff are, who their volunteers are.

And so one recommendation in the report is that everybody who says they’re doing public interest technology, or using technology for good, should be gathering data about, at the very least, race and gender, and publicly releasing it. Gathering and releasing diversity data, and setting time-bound, public targets for diversity and inclusion goals, are two main things that we know work in organizations, from the evidence-based literature. Good intentions aren’t enough.

Although we weren’t able to gather that kind of sector-wide diversity data, we did interview 109 people and conduct focus groups with 79 more, and asked them about their experiences with racism, sexism, transphobia, ableism, and other common forms of systematic marginalization people experience. About half of the people we talked to for the report said they had experiences like that.

The leading recommendation at the end of the report is summed up in a slogan from the disability justice movement, which is, “Nothing about us, without us.” The idea is that when you’re going to develop a technology to help a community, you have to include members of that community from the beginning of your process … and ideally in the governance of the project when it’s deployed.

Q: The report also suggests people should not always look for “silver bullets” or instant answers from technology alone. Why is that, and what are some of the other recommendations from the report?

A: I’m not going to say it’s never about finding a new [technological] solution, but over and over again, the people we interviewed said the projects that were most successful were deployments of resilient, proven technology, rather than some super-exciting new app that’s suddenly supposed to solve everything.

One recommendation is that when organizations set up tech teams, you want someone from the community on the design team, not just at a moment of consultation. That’s a pretty important takeaway. A lot of people told us it was important to go further than just doing initial consultations with a community — having people on the design team from beginning to end is a best practice we recommend.

Some people talked about creating tech clinics, modeled after legal clinics in education. That would be something a place like MIT could think about. Law schools often require students to spend a certain number of hours providing legal services pro bono to people in different domains who otherwise can’t afford lawyers. It would be interesting to consider whether there could be a [similar] tech clinic concept.

Our final recommendation was about recognizing organizational models beyond traditional startups, government offices, or 501c3 nonprofits — for example, consider tech cooperatives, or ad hoc networks that emerge around a crisis moment. These are hard for investors or foundations to fund: Whom do you fund? And yet a lot of really important technology projects are informal. In the wake of Hurricane Maria in Puerto Rico, there were hundreds of developers, techies, and community organizers doing everything they could, ad hoc, to get communications infrastructure back up.

People should develop strategies for supporting those kinds of networks when they do spring up. For funders, that may mean setting up a crisis response fund with a mechanism to rapidly dispense smaller amounts of funds. And members of the MIT community who are creating new companies to bring “tech for good” innovations to market should consider worker-owned cooperatives, platform co-ops, and other models that internally mirror the kind of world they’d like to build.

The report can be accessed at http://morethancode.cc.

A team of MIT engineers has developed a navigational method for autonomous vehicles to navigate accurately in the Arctic Ocean without GPS.

A unique partnership continues to thrive