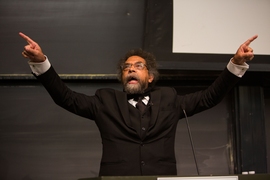 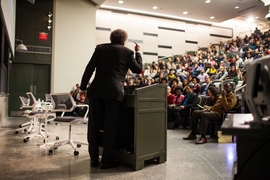 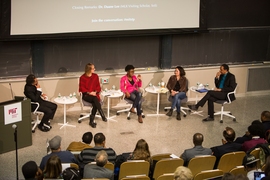 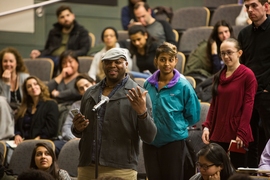 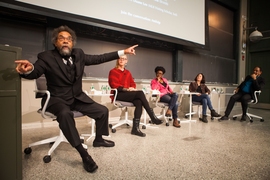 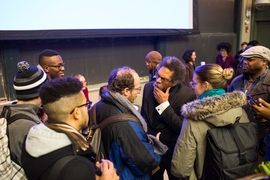 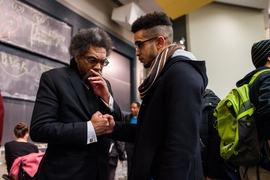 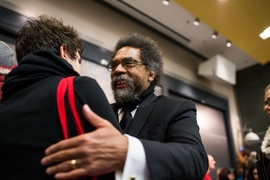 Caption:
A panel of MIT scholars followed West’s talk with a discussion. From left: Sasha Costanza-Chock, the Mitsui Career Development Associate Professor in Contemporary Technology; Joy Buolamwini, a PhD student at the MIT Media Lab; Jennifer Light, chair of the MIT program in Science, Technology, and Society; and moderator Ceasar McDowell, professor of civic design in MIT’s Department of Urban Studies and Planning.

How can universities be a force for social good in turbulent times? At an MIT talk on Wednesday evening, the prominent philosopher Cornel West had a clear answer: painful self-reflection.

More precisely, West suggested, the individuals who populate institutions of higher education should rigorously reexamine the consensus beliefs they encounter and, ideally, develop an “aversion to conformity” that will help bring vitality and diversity to academic life.

Higher education, West added, should be about not “information,” but “transformation” — a process of questioning assumptions and refining habits of critical thinking that can be applied to any issue.

“I don’t fetishize smartness,” West said, observing that the lessons of one discipline do not necessarily translate into other realms — and that we should be wary of overestimating people based on their apparent sharpness in one sphere of life. At leading universities, West suggested, there is greater danger in overestimating people than in being humble about our capabilities.

“We recognize we will be wrong as well as right,” West said.

West’s talk, titled “Speaking Truth to Power! A Discussion on Institutional Provincialism,” took place before a packed auditorium in MIT’s Room 10-250. West was joined by five MIT scholars who made their own remarks after his talk and engaged with an extensive round of questions from the audience.

West is a professor of the practice of public philosophy at Harvard Divinity School and holds a joint appointment with Harvard’s Department of African and African-American Studies. He is author of, among other books, “Race Matters” and “Democracy Matters.” He has appeared in over two dozen documentaries about social issues and released three spoken-word albums.

West was introduced by Ty Austin, a graduate student in MIT’s Department of Architecture, who outlined the issue West discussed: Institutions benefit by developing stable identities, but too much conformity, or too narrow an institutional identity, can limit an university’s ability to influence an ever-changing world.

“We bring a sort of identity [and] mindset into this vast metropolis of higher learning,” Austin said. And yet, he observed, if a university’s inhabitants adhere to “the same identity and like-mindedness,” it is quite possible that “the very institutions that are said to broaden horizons and advance technology and society” would exist for “the benefit of the few, by marginalizing the many.”

West did not offer a detailed critique of the Institute: “I’m not here to pontificate. I don’t know that much about the internal dynamics of MIT,” he said. Instead, he offered reflections about the practice of self-examination, as well as the larger, pressing problems in the world today.

We are facing, among other hazards, “economic catastrophe” in the form of inequality, West said. He noted that the three richest Americans have wealth equivalent to the bottom half of the population.

The changing climate, West said, was an environmental “catastrophe” in the making for all of society. He also decried the increase of racially charged politics and immigration issues in the U.S. in recent years.

“We live in one of the bleakest moments in the history of the empire,” West said, adding: “It’s a test of who we are.”

West’s talk occurred during Black History Month, which he called “sacred ground” in American life, and he decried the use of sanitizing euphemisms for political discord in the U.S., such as the term “race problem” as a description of civic conflict. Instead, West said, there have been a “series of catastrophes visited upon blacks” in the U.S.

While talking about the need for self-critique on campuses, West also sounded upbeat notes about the possibilities for social rejuvenation that come with intellectual freedom.

“Social movements need some MIT folks — who do their homework,” West said.

“That’s a challenge to all my brothers and sisters here of all colors at MIT,” he added. “How do you not just talk about it, but enact a sensitivity to the problem, in your curriculum, in your own praxis, in your organizational affiliation.”

The event was sponsored by all five of MIT’s schools — the School of Engineering, the School of Science, the School of Architecture and Planning, the Sloan School of Management, and the School of Humanities, Arts, and Social Sciences — as well as the Media Lab, the Program in Media Arts and Sciences, the Office of Graduate Education, the Institute Community and Equity Office, and the Committee on Race and Diversity.

The view from the panel

The event also featured a panel of MIT students and faculty who spoke about how they work to help bring alternate ideas to the Institute.

Joy Buolamwini, a PhD student at the MIT Media Lab, founded the Algorithmic Justice League to push back against ethnic biases in machine learning, such as in facial recognition programs.

“I’m coming up against something I call ‘the coded gaze,’” Buolamwini said, referring to the decisions and assumptions in such programs, which, she noted, reflect “the priorities and preferences of what those who have power choose to focus on, who’s visible, who’s rendered invisible.”

“In this process of problem-solving,” said Costanza-Chock, it is important “to think about how do we say, ‘Well, I may be a brilliant person, and I may have a certain set of skills and knowledge in one domain, but how do I really work in partnership with, or even in service to [people who] are experiencing the lived reality of intersectional oppression?”

Jennifer Light, chair of MIT’s Program in Science, Technology, and Society, observed that knowledge of the past can make clear that science and technology should always be understood in relationship to civic life — and have been used to exacerbate harmful social goals. For instance, Light noted, professors at elite U.S. universities in the 1920s favored eugenics programs.

“Smart people have lots of bad ideas,” said Light. “And history can be a tool to understand that, and take to your own present.”

The panel was moderated by Ceasar McDowell, a professor of civic design in MIT’s Department of Urban Studies and Planning, who also contributed remarks to the discussion. In contemporary higher education, he noted, there can be a tension between the effort to support a high volume of innovation and the need to understand the social effects of new technologies.

“We want people to innovate. We want people to move things to market,” McDowell said. And yet, he noted, institutions can guide the process of research and development, potentially with ideas of social good and ethical standards in mind. In that sense, McDowell said, one challenging form of self-examination for universities would be to discuss the “set of standards [for] things we’re going to innovate around.”

The event’s concluding remarks were delivered by Duane Lee, an astronomer who is a postdoc at Vanderbilt University and an MLK Visiting Scholar at MIT. Lee discussed the need to challenge conventional wisdom as a way of increasing diversity in academia.

“At times we delude ourselves that we are immune to biases,” said Lee, relating multiple instances in which professional colleagues have asserted to him that increased diversity in his field would lead to a lowering of overall academic standards.

On the contrary, Lee suggested, if the discipline had been tapping into a talent pool consisting of everyone in society, not just the narrower cross-section of society it has traditionally employed, then the standards of the field, along with the rate of progress, would likely be higher than they currently are.

West praised the contributions of the other panelists and, along with them, fielded audience questions, telling one undergraduate that social engagement can also be a source of energy and enjoyment.

“There’s got to be some joy in it,” West said about the practice of social activism. “If it’s just done out of joylessness, then you’re not going to be a long-distance runner.”

For that matter, West noted earlier in the event, persistence and determination are key components of enacting civic change in the face of setbacks or just intermittent public indifference.