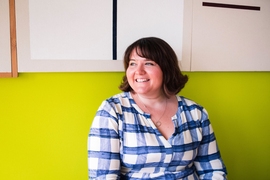 ↓ Download Image
Caption: “We are trying to solve the issue of youth unemployment through entrepreneurship and through making small businesses more efficient — starting more businesses, starting them well, having them grow up to the point where they can be employers,” says graduate student Meghan McCormick about her company, Osez Innover, which operates in three countries in West Africa.

Caption:
“We are trying to solve the issue of youth unemployment through entrepreneurship and through making small businesses more efficient — starting more businesses, starting them well, having them grow up to the point where they can be employers,” says graduate student Meghan McCormick about her company, Osez Innover, which operates in three countries in West Africa.

They had called for a secret meeting. The young Guineans, between 18 and 35 years old, were just two days away from the end of their entrepreneurship program, which had been developed by Peace Corps volunteer Meghan McCormick. The program, intended to address the high rate of unemployment in the country, had made such an impact on these young adult’s lives that they had decided to make a pact.

“Americans come and go. Projects come and go. We’re Guinean. We’re here. This is our movement and we need to make sure this continues,” they later told McCormick.

Inspired by these young people’s commitment to their community and fueled by a desire to make large-scale, positive change in the world, McCormick is now the CEO of an up-and-coming social entrepreneurship company that spans three countries in West Africa and is helping to build the region’s economy by teaching and supporting local youth who develop their own small businesses.

McCormick is also pursuing an MBA from the MIT Sloan School of Management, with support from the Legatum Center for Development and Entrepreneurship, as well as a master’s in public administration from the Harvard Kennedy School. Her education track is slightly atypical in that she doesn’t take classes in order to find a path to her future career. McCormick’s career is already launched, and she has tailored her education to benefit her company.

“I was attracted to MIT because of its bias toward doing, and I have not been disappointed,” McCormick says. She notes, for example, that the MIT Sandbox Innovation Fund gave her support to build a prototype of a new product, take it out into the field in Ghana, and test it with new users. “We don’t just theorize in the classroom, but actually go out into Boston or the world and apply the theory.”

The company’s name, Osez Innover, is French for Dare to Innovate. With approximately 30 employees, it’s a big organization from McCormick’s perspective.

“It’s big in terms of aspirations and what we’re promising to do,” she says. “We are trying to solve the issue of youth unemployment through entrepreneurship and through making small businesses more efficient — starting more businesses, starting them well, having them grow up to the point where they can be employers.”

McCormick’s idea for co-founding the social enterprise came from her time working with the Peace Corps in 2011. She was a community economic development volunteer with a mandate to improve West Africa’s economy. Young people were the volunteers’ target; unemployment rates for Guineans between the ages of 18 and 35 were 60-71 percent, McCormick says.

After a year of trying different strategies, inspiration struck: “I was out for a run and thinking of a portfolio of products and services we could deliver that would transform unemployed youth and job seekers into job creators. When I got home I mapped it all out in my notebook and it ended up being a conference we called, ‘Dare to Innovate: The Conference for Social Entrepreneurship.’”

The conference served as an accelerator program that recruited 21 unemployed Guinean youth to develop ideas for businesses that had to be social enterprises. McCormick and the other Peace Corps volunteers, along with local partners, then taught an entrepreneurship course as a 10-day program so that by the end the young entrepreneurs would feel empowered to start their own social enterprises. Each of the young Guineans pitched their ideas during the course. From there, seven businesses received seed funding.

One of the startups that emerged was a mobile veterinary clinic. Its founder provides veterinary services to rural chicken farmers and cow herders who never had access to such services before. The growth of the business is now helping the Guinean entrepreneur purchase and provide animal feed for the malnourished animals he’s treating.

Then there was Durius, a young Guinean with a passion for creativity and art. When McCormick met him, he had already developed a rap song to teach children about washing their hands. Through the Dare to Innovate accelerator program, he started a private school that emphasized creativity and critical thinking over memorization. Durius started with 30 students; by 2015 the school had over 600 students, with 400 more on the wait list.

The first year of the program was so successful that the Peace Corps team decided to go a second time to Guinea. However, a week before they were scheduled to convene the second class of Dare to Innovate fellows, the Ebola epidemic swept across West Africa and the Peace Corps evacuated from Guinea, Sierra Leone, and Liberia. As a result, McCormick’s project lost its funding.

“It was a bit of an existential crisis for the organization because if we wanted this to go on, it needed to be independent from the Peace Corps. We don’t want to be doing a nonprofit; we want to do something that is financially stable, if not profitable. So the whole team of founders came together, and we basically went through our own accelerator program,” she says. “That’s when we made the transition from a Peace Corps project that was supposed to be my hobby, to a career that I hope to establish.”

Because Guinea was inaccessible, they resumed their mission in Benin as an independent organization, with McCormick as the CEO. The hybrid venture, which includes both for-profit and nonprofit operations, that provides training, investment, and support to young entrepreneurs.

Since then, Dare to Innovate has continued to flourish. The company currently has 36 companies in its portfolio, with half related to agriculture and a big portion in education. After the Ebola outbreak subsided, they returned to Guinea while continuing to provide services in Benin. Now, they have also expanded to Ghana, where they are developing a business analytics tool that helps small businesses make data-driven decisions to improve their performance.

“We’re trying to make this a real, scaled, profitable enterprise that helps launch and grow small businesses in Africa, because those are the businesses that create employment when there’s a youth unemployment crisis,” she says.

“I tailor my classes specifically to what I need to do for the business,” McCormick says. “The app does a lot on financial statement analysis, so I took a class on financial statement analysis because I had a basic knowledge but I wanted more. I did an independent study over the January term that involved market research in Ghana on problems facing small businesses.”

“The point of my degree is to learn how to scale this organization and do it right, as well as to scale our relationships with governments, so that even if you haven’t touched one of our programs or products, the fact that we’re running in your country means you are more likely to start a small business and succeed,” she adds.

McCormick aims for her company to deliver financial and social impact on a large scale across West Africa. Her drive is fueled in part by her perspective on growing up in suburban Philadelphia.

“I feel really privileged by the level and quality of education I’ve had in my life. I went to an amazing private elementary school, great high school, Georgetown for college, and felt that yes, I was able to go to these schools because I worked hard, but also because I had access. So, I felt compelled to share what I had learned and what I benefited from with people who couldn’t have access to what I had,” she says.

Traveling to West Africa and trying to help develop the region’s economy is intellectually and emotionally invigorating for McCormick.

“West Africa, with the exception of Nigeria, which is a powerhouse in its own right, has not been invested in. You’re not creating an app that gets your Whole Foods groceries delivered to your refrigerator; you’re maybe helping someone create a refrigerator that is solar powered so that people can preserve vegetables, or you’re helping increase the output of agriculture. For me, that’s way more exciting than pushing something just a bit farther in the developed world.”

When McCormick first arrived in Africa, she found the lifestyle differences shocking. But after living for three years in sum, she has become accustomed to the changes.

“In the U.S. at MIT, I can walk two minutes in any direction and hit a 3-D printer. I get on a plane and get off in Guinea and you don’t have electricity. It’s just your life,” she says.

McCormick isn’t sure where she or her company will be in the future after she graduates, but she is confident about one fact: “Whether it is financial inclusion technology or small business development,” she says, “I think, no matter what I’ll be doing, I’ll be working in the private or hybrid sector in West Africa.”