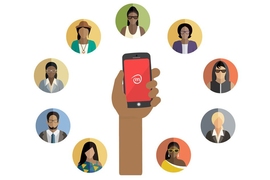 ↓ Download Image
Caption: mSurvey uses text message-based surveys to gather purchasing behavior of people living in previously hard-to-reach communities in Kenya, the Philippines, Jamaica, Trinidad and Tobago, and other locations in Africa and the Caribbean. In return for their feedback, participants receive mobile money. 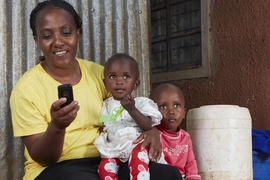 Caption:
mSurvey uses text message-based surveys to gather purchasing behavior of people living in previously hard-to-reach communities in Kenya, the Philippines, Jamaica, Trinidad and Tobago, and other locations in Africa and the Caribbean. In return for their feedback, participants receive mobile money.
Credits:
Courtesy of mSurvey

While on location in remote areas of Kenya, researching automation and home manufacturing for his doctoral dissertation, Kenfield Griffith PhD ’12 encountered a significant lack of data.

For example, information he needed about whether people had access to indoor plumbing was scarce or nonexistent — and conducting traditional surveys to gather the data would be arduous and time consuming. But nearly all rural Kenyans, he realized, had texting-capable cell phones.

Back in his MIT dorm room, Griffith built a platform that allowed users to easily create and send text message-based surveys, and monitor incoming results in real time on a web dashboard. Returning to Kenya, he amassed hundreds of participants to use the platform, and completed his research.

“I was getting interesting information that you couldn’t find anywhere else, from people who didn’t have a bathroom but had mobile phones,” Griffith says. “That was the epiphany for me, where I said, ‘This could be an opportunity to really understand consumers on the ground and create conversations at scale.’”

In 2012, Griffith commercialized the platform as mSurvey, which is now being used by companies to gain insights into the purchasing behavior of people living in previously hard-to-reach communities in Kenya, the Philippines, Jamaica, Trinidad and Tobago, and other locations in Africa and the Caribbean. In return for their feedback, participants receive mobile money.

Researchers are also using the platform for tracking and improving HIV medication adherence across Africa, monitoring pregnancy and abortion results of Kenyan women, and other studies. The City of San Francisco has started using the platform to improve services for people living with HIV and AIDS.

In March, mSurvey partnered with Kenya’s leading mobile provider, Safaricom, to launch Consumer Wallet, a platform that, for the first time, tracks consumer cash spending in Kenya. “Consumers in the most rural areas of Kenya, and other emerging markets, don’t really have a voice,” says Griffith, who studied design and computation in the Department of Architecture at MIT and is now CEO of mSurvey. “We’re capturing that invisible consumer.”

Instrumental in his startup’s success, Griffith says, was the funding he received from the Legatum Center for Development and Entrepreneurship, which offers resources to MIT students, faculty, and departments that are looking to improve the lives of people in the developing world. The center now lists mSurvey as a successful case study.

With mSurvey, users sign onto a web dashboard to create a survey conversation of multiple-choice and open-ended questions. They set the number of participants, and an algorithm randomly shoots off the surveys to the selected number from the “universe” of participants; in Kenya, that’s 21 million, or nearly half the population. To narrow down this list, users can also set parameters, such as age, gender, and location. By partnering with mobile-money providers, mSurvey sends small amounts of mobile money to all participants for completing all questions.

Companies might use the surveys to brand products. If a survey indicates that most people eat, say, yogurt because it tastes sweet and is healthy, the company may emphasize those descriptors in advertisement campaigns.

But an important perk of mSurvey is collecting data in real-time. Companies can view how advertisement campaigns are doing and potentially revise the campaign on the fly. Restaurants, banks, and coffee houses use mSurvey to get quick customer feedback and refine their offerings and services. Executives have been known to gather data on how a product is doing within hours before walking into board meeting, Griffith says.

“The platform gives companies the ability to have these conversations with customers in real time, at scale,” Griffith says.

As an entrepreneur himself, Griffith notes that the platform could also help fledgling entrepreneurs in Kenya and other emerging markets find out if locals can afford their products and services. “With entrepreneurs, time is of the essence. We don’t have three months to go through this elaborate surveying process. We want that information about the consumer now,” he says.

With Consumer Wallet, Griffith says, companies can now gain insight into Kenyan cash purchases to make better decisions about what products and services the people need and want. About 55 percent of Africa’s economy comprises cash purchases, he says. In the past, companies and researchers have tracked purchases by having people in developing countries keep records in journals.

“We’ve digitized that process,” Griffith says. “We’re talking to thousands of consumers to understand their spending habits day after day.”

The startup is now looking to expand Consumer Wallet across Africa. Collecting cash-spending data across the continent could lead to greater investments, Griffith says. By 2020, he says, consumer spending in Africa will be about $1.2 trillion, but investors need to know where that money goes.

“You don’t invest is something you don’t know,” Griffith says. “We’re proud, because we can create this visibility into this cash economy that wasn’t formalized before. Now we’ve formalized it using a mobile phone.”

What began as part of a doctoral dissertation has also returned to academia, for the benefit of public health. Researchers are using mSurvey to better connect with communities in Africa and here in the U.S. To conduct surveys, researchers generally recruit clinicians to conduct traditional surveys in the country of interest, which is time-consuming and can result in lack of data or incorrect analyses. On the other hand, mSurvey is quick, accurate, and well-regarded among participants.

Among notable mSurvey case study participants is Harvard Medical School, which has been using mSurvey for three years to monitor and improve adherence to an HIV-suppressing drug, called pre-exposure prophylaxis (PrEP), among “discordant” couples in Kenya and Uganda. Over nine months, the researchers enrolled nearly 400 HIV-negative partners who had HIV-positive partners, to receive daily surveys asking about their adherence and sexual behavior, with aims of quantifying their risk. A vast majority of participants reacted positively to mSurvey, and the researchers used the results to develop effective text-based intervention techniques to boost adherence.

A similar study — measuring PrEP and other medication adherence among discordant couples to ensure safer pregnancies — was conducted by the Washington University at Seattle, also with useful results.

In its effort to eliminate all new HIV infections by 2020, the San Francisco Department of Public Health is using mSurvey to help people living with HIV better engage with service programs. Clients receive daily surveys asking about their mental health, substance use, and support systems. They also have access to real-time, personalized support.

At the end of the day, Griffith says the platform’s value lies in its potential for scalable impact, whether for commercial or research purposes. “That impact could be quantified by more customers using a product. In the research sense, the medication is a product too. You want more people to have access to this medication,” he says. “Everyone wants to have impact.”