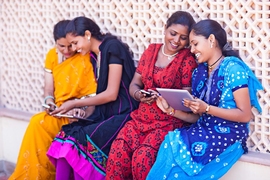 In an unassuming office building in downtown Boston, a midsized tech startup founded by an MIT alumnus has a reach of more than half of the world’s population.

With Jana’s ubiquity comes significant social impact: In developing countries across Africa, Asia, and Latin America where Jana operates, people earn low wages, yet are increasingly buying prepaid mobile phones for communication. According to Jana, about 10 percent of these people’s daily wages pays for mobile connectivity, with roughly three hours of work equaling the cost of one hour of data.

Through Jana’s app, mCent, prepaid users can download apps, watch ads, or participate in other marketing services. In return, they receive credits of 10 cents or more that can be used to buy more data. This credit offsets the cost to download and run an app for up to several weeks. In the last year, mCent users generated nearly 1.5 billion megabytes of free data.

“Ultimately, this is the world’s largest compensation platform,” says Eagle, whose mobile-programming research at the MIT Media Laboratory set the stage for Jana.

The company is currently integrated with 237 mobile operators active in 102 countries. Jana’s clients are major app developers — such as Twitter, Amazon, and Google — that pay Jana to gain long-term users in emerging markets, which were previously difficult to penetrate with users’ restricted data plans. According to Jana, mCent members use apps three to 14 times more than users acquired through other channels.

Although launched in 2009, Jana exploded in popularity with last June’s launch of mCent, which has more than 25 million registered users across Asia, Africa, and Latin America. It’s now one of the most popular apps of all time in India, positioning Jana as one of the largest mobile advertising platforms there, Eagle says. “We finally decided to put an Android wrapper, a consumer-facing front-end on this robust infrastructure,” he says. “From there, it took off.”

Eagle’s work in mobile programming began at MIT in the early 2000s, when he joined Alexander “Sandy” Pentland’s Wearable Computer Group at a time when students were mounting computers to their backs or on helmets. During this time, Nokia launched a programmable phone that attracted the worldwide attention of programmers, including Eagle.

In one of the earliest cases of reality mining, Eagle and Pentland used the phones as wearable sensors to passively collect data on 100 MIT students over the course of nine months. Based on that data, they were able to track and predict the students’ behavior.

Eagle’s novel data analytics caught the eye of mobile operators in emerging markets — specifically Africa — that were inundated with petabytes of data from a booming mobile-user base, but had limited analytics resources. Eagle then relocated to a rural Kenyan village, Kilifi, to work on call data analytics, which gave him access to the back-end billing systems of dozens of operators.

While working out of an office at a local hospital, however, Eagle became troubled by the constant shortages in the hospital’s blood supply: Over two months, he was approached four separate times to donate blood for emergency transfusions.

Researching blood supply across Kenya, Eagle found that the issue was a lack of data: Keeping blood supplies stocked involved one person traveling between hospitals, checking current levels, and replenishing when needed — resulting in a lag of about four weeks.

With students at the University of Nairobi, Eagle developed an app that allowed nurses to text their hospitals’ daily blood-supply levels, which were tracked in real time at the centralized blood bank.

The app quickly became a huge success across Kenya, registering hundreds of nurses. But after one week, half the nurses stopped texting. By the month’s end, no nurses were using the platform. The issue was the cost of data.

“The price of a single text message represents a substantial fraction of a nurse’s day’s wage. By asking them to participate every day, we were asking them to take a pay cut,” Eagle says.

Eagle then wrote code that compensated the nurses for each accurate text sent about the day’s blood-supply levels. “We’d credit that nurse about 10 Kenyan shillings to cover the cost of the text, and a penny or two to say thank you,” Eagle says. With that incentive, nurses once again jumped on board, resurrecting the app, which is still being used across Kenya.

This compensation app, however, soon “flipped a switch” for mobile operators, Eagle says, that had seen its scalability: Instead of squeezing more money out of nurses, why not ask the Kenyan government, for instance, to buy the airtime for the project?

“Then, why not ask Procter and Gamble, or Unilever?” Eagle says. “These operators got me to start thinking about this as a commercial entity instead of an academic project.”

In 2009, Eagle co-founded Jana under the original moniker “txteagle.” By the following year, Eagle had partnered with 100 mobile operators worldwide, gained access to 2 billion people, and relocated to Boston, with several more employees. Since 2011, the startup has raised $40 million in funding.

Early challenges came from gaining funding and support for the startup’s business model, Eagle says. “Convincing people that we can be a commercially viable enterprise with our core mission of building technology that enables us to make the Internet free in the developing world has been tricky,” he says.

But credibility increased with profitability, Eagle says. Now Jana aims to have 1 billion mCent users, he adds, in hopes of cutting costs of connectivity for all users to around 5 percent of daily wages, from 10 percent.

“You don’t get many opportunities in life to give a billion people a 5 percent raise,” Eagle says. “I think we have a shot at realizing that goal in the next two to three years, which is extraordinary.”

In an article for BetaBoston, Janelle Nanos writes about Jana, an MIT startup that allows mobile phone users in developing countries to access the Internet for free.  “We’re empowering people with connectivity and we’re not limiting how they’re using that connectivity,” explains Jana founder and MIT alumnus Nathan Eagle.

Technology takes the chance out of chance encounters