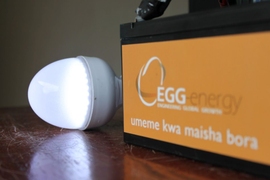 Over the years, EGG Energy, co-founded by MIT and Harvard University engineering and business students, has garnered public praise as the “Netflix of electricity” for rural Tanzania.

In the region outside Dar es Salaam, the nation’s capital — where only about 6 percent of households have grid access — EGG equipped off-grid homes with battery systems that powered several LED light bulbs, mobile chargers, televisions, radios, and other electronic devices for several days. Paying a subscription rate or fee per swap, homeowners returned drained batteries to charging stations, erected within walking distance and run by local entrepreneurs, and collected fully recharged batteries — much like exchanging DVDs via Netflix.

By 2013, EGG had provided about 1,000 homes in the region with these systems. EGG aimed to improve the quality of life for families and business owners, but also sought to solve health and environmental issues by replacing hazardous and polluting kerosene lanterns, used for lighting, with light bulbs.

But EGG has since scrapped its battery-exchange model for an improved clean-energy approach: equipping homes with mobile-connected, rent-to-own, solar-power systems. With its new model, EGG is reaching larger homes, schools, and businesses such as barber shops, cellphone charging stations, and movie houses, where people gather to watch movies or sports on big televisions.

“You can go 20 to 30 kilometers out of the city and be in areas where there’s no power, and people there have lost all hope of ever getting any power,” says Jamie Yang PhD ’08, co-founder and president of EGG. “This is a step toward having a more modern household and, for some, it’s a business opportunity.”

EGG sends local electricians to hook up homes with a solar panel supplying 50 to 200 watts (depending on need), a battery, wiring, a mobile phone charger, and at least three 4-watt LED lights. EGG monitors the systems remotely and customers pay bills via “mobile money” services that have started cropping up around Africa. Systems cost anywhere from $650 to $2,000, depending on the size, financed over two years.

The startup has installed more than 300 solar-powered systems, and aims to install 2,000 systems in three regions in Tanzania in the next year. After that, Yang says, it will branch out to other regions of Tanzania, where about 82 percent of the nation’s 45 million people lack grid access.

In June, EGG won the National Geographic Society’s inaugural Terra Watt Prize, worth $125,000. In November, the Alstom Foundation granted the startup about $68,000 to deploy is system to 18 schools in Tanzania’s Iringa region, replacing expensive generators that power lights and phone-charging stations.

So far, EGG has helped replace thousands of kerosene lamps, traditionally burned indoors for light. These lamps spew out more than 18,000 tons of black carbon annually in Tanzania, according to a 2013 report from the Clean Air Task Force — polluting the air and causing indoor air pollution, which the World Health Organization estimates causes about 4 million deaths annually across the developing world. (EGG estimates that each customer had used about four liters of kerosene per month.)

Households are also using many fewer disposable AA batteries — usually used for flashlights — which tend to pile up in local landfills, where their toxic chemicals can leak into the ground and water.

Not needing to buy disposable batteries and kerosene saves customers about $8 to $12 per month. (With EGG’s subscription battery-exchange system, customers saved around 50 percent monthly.) Savings from replacing expensive diesel generators at businesses, schools, and larger homes are more difficult to calculate, Yang admits. But, he says, solar power is generally significantly cheaper than diesel generators for the service they provide.

Not surprisingly, Yang says, access to televisions and radios has helped EGG customers feel more socially connected. “This ability to connect to other people around the country and to also feel that they’re more knowledgeable or connected to the country, and the events, are the things that people really enjoy,” he says.

EGG’s story starts at MIT, where its co-founders met through a shared interest in energy issues in the developing world.

In 2008, Yang, a nuclear science and engineering student who had started researching energy issues, met Blandine Antoine PhD ’13, an Engineering Systems Division (ESD) student who had recently traveled around the world to research energy innovations. When they learned that more than 500 million people in the sub-Saharan African region lack access to electricity, they started brainstorming ways to connect them to the grid.

Reaching out to the MIT community for ideas, they attracted ESD student Rhonda Jordan PhD ’13, who had traveled to Tanzania as part of the United Nations Environment Program, and focused her MIT dissertation specifically on improving grid connectivity there.

With Jordan’s knowledge and connections to Tanzania, the startup formed with an initial focus, in fact, of bringing solar-home systems to the country. But when a fourth co-founder, Jukka Valimaki MBA ’10, briefly traveled to Tanzania to conduct market research, he returned with dire news. “To our surprise, solar was completely infeasible economically,” says Jordan, who initially served as EGG’s chief operations officer and is now an EGG board observer.

In their combined research and experience, however, the co-founders had discovered an interesting phenomenon in Tanzania: Even for houses close to the grid, an inefficient distribution system and prohibitive costs were stopping widespread connectivity.

“In some rural, and in urban and [suburban] areas, you’ll see these power transmission lines, but there’s no distribution line that’s strapping to the customer’s household,” Jordan says.

So the team added three MBA students from the Harvard Business School and pivoted to its battery-exchange model — almost literally a “last-mile” distribution plan — that earned them awards from the 2009 MIT IDEAS Global Challenge and other competitions. From 2009 to 2013, EGG erected several charging stations, which became widely popular. (In an article in MIT Spectrum, Jordan recalls, early in the startup’s history, seeing customers lined up at the stations an hour before they opened.)

Even after connecting about 300 households to each charging station, however, the startup was falling short of its target of 800. With a declining cost for solar panels and the ability for customers to make mobile payments, which greatly reduced the price of operations, Jordan says, it was time “to go full circle” — back to solar.

But EGG’s “last-mile” philosophy hasn’t changed, Yang says — it’s just taken on a new meaning. Technology-agnostic, the startup focuses only on marketing and deploying optimal energy systems to customers, managing interactions, and troubleshooting. Today the best energy solution for customers is solar power, Yang says, but tomorrow it could be something new and improved.

“It was more literal ‘last-mile’ with the original conception,” he says. “But in general, we’re talking about closing that final gap between that energy system and the customer.”