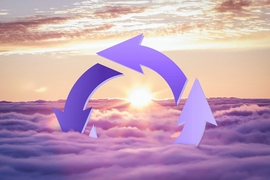 ↓ Download Image
Caption: Scientists in MIT’s Department of Earth, Atmospheric and Planetary Sciences (EAPS) have for the first time determined the strength of the stratosphere’s circulation, based on observations of key chemicals traveling within this atmospheric layer.

Caption:
Scientists in MIT’s Department of Earth, Atmospheric and Planetary Sciences (EAPS) have for the first time determined the strength of the stratosphere’s circulation, based on observations of key chemicals traveling within this atmospheric layer.

When commercial airplanes break through the clouds to reach cruising altitude, they have typically arrived in the stratosphere, the second layer of Earth’s atmosphere. The air up there is dry and clear, and much calmer than the turbulent atmosphere we experience on the ground.

And yet, for all its seeming tranquility, the stratosphere can be a powerful conveyor belt, pulling air up from the Earth’s equatorial region and pushing it back down toward the poles in a continuously circulating pattern. The strength of this circulation can significantly impact the amount of water vapor, chemicals, and ozone transported around the planet.

Now scientists in MIT’s Department of Earth, Atmospheric and Planetary Sciences (EAPS) have for the first time determined the strength of the stratosphere’s circulation, based on observations of key chemicals traveling within this atmospheric layer.

In a paper published today in the journal Nature Geoscience, the team reports that the stratosphere pulls about 7 billion kilograms of air up through the tropics per second, worldwide, at an altitude of about 20 kilometers. The researchers estimate that the average parcel of air can spend about 1.5 years within this layer before circulating back down to lower layers of the atmosphere.

The new estimate can help scientists gauge where and for how long water vapor, ozone, and greenhouse gases remain within the stratosphere. Scientists can also use the team’s method to determine future changes in the stratosphere’s strength — essential information for tracking the recovery of the ozone hole and the progression of global warming.

The paper’s lead authors are Marianna Linz, a former PhD student in EAPS who is now a postdoc at the University of California at Los Angeles; and Alan Plumb, a professor emeritus in EAPS; along with researchers from New York University, Karlsruhe Institute of Technology, the National Center for Atmospheric Research, Cambridge University, and Caltech.

“Others have looked at this region of the equator where they think most of the stuff is coming up, and they’ve tried to characterize this using water vapor,” Linz says. “But that’s just looking at this narrow region, and it’s difficult to infer what the rest of the circulation looks like.”

Linz, Plumb, and their colleagues took a more global approach, making use of atmospheric measurements of two atmospheric chemicals, sulfur hexafluoride and nitrous oxide, taken around the world by satellites, weather balloons, and aircraft. They considered these chemicals to be ideal candidates to track, as they have no “stratospheric sinks,” or methods by which the concentration of these gases would change once they reached the stratosphere.

“The thinking is that what goes up must come down,” Linz says.

at various locations and altitudes.

In particular, they looked over time to identify parcels of air rising up in the tropics, and later, parcels of air with the same concentration of chemicals, being drawn back down at the poles.

“If you think of a racetrack, and someone doing a lap on that track, you can measure the time they entered the track, and the time they came out of it, and you can calculate their average speed around the track if you know the track distance,” Plumb explains. “So this is like that, in a way.”

The air up there

The team performed these calculations and averaged the results for various altitudes throughout the stratosphere. Their calculations for both chemicals agreed almost perfectly at lower altitudes of around 20 kilometers, yielding a circulation strength of about 7 billion kilograms per second — comparable in magnitude to the strength of the overturning circulation in the ocean.

“The most important thing to know in terms of impacts on climate change and ozone is what this circulation strength is like at this lower altitude, because that’s what is supplying chemicals to the stratosphere,” Plumb says.

Linz and Plumb compared their estimate with predictions of stratospheric circulation made by several climate models, and found that their estimate agreed with some models but not others. Linz says the team’s new estimate, and the method to calculate the stratosphere’s strength, can help to improve model predictions of warming and ozone development.

“If climate models are getting their stratospheric circulation wrong, they’re probably getting their ozone distributions wrong, which will have definite impacts on what the [predicted] trends are for global warming,” Linz says. “So having this benchmark is really valuable.”

The researchers are working to obtain more measurements, higher in the stratosphere, to better characterize the stratosphere’s strength at higher altitudes as well as within lower layers.

“We have this data and can say what the strength is at this level, but because we don’t have the data higher up, we can’t say nearly as much. So we really do need better observations in the upper stratosphere,” Linz says.