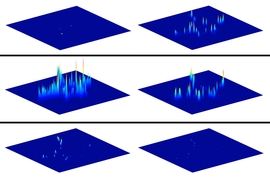 Using arrays of up to 20,000 tiny sensors, the researchers can monitor dopamine secretion of single neurons, allowing them to explore critical questions about dopamine dynamics. Until now, that has been very difficult to do.

“Now, in real-time, and with good spatial resolution, we can see exactly where dopamine is being released,” says Michael Strano, the Carbon P. Dubbs Professor of Chemical Engineering and the senior author of a paper describing the research, which appears in the Proceedings of the National Academy of Sciences the week of Feb. 6.

Strano and his colleagues have already demonstrated that dopamine release occurs differently than scientists expected in a type of neural progenitor cell, helping to shed light on how dopamine may exert its effects in the brain.

The paper’s lead author is Sebastian Kruss, a former MIT postdoc who is now at Göttingen University, in Germany. Other authors are Daniel Salem and Barbara Lima, both MIT graduate students; Edward Boyden, an associate professor of biological engineering and brain and cognitive sciences, as well as a member of the MIT Media Lab and the McGovern Institute for Brain Research; Lela Vukovic, an assistant professor of chemistry at the University of Texas at El Paso; and Emma Vander Ende, a graduate student at Northwestern University.