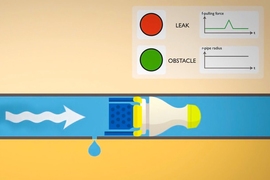 ↓ Download Image
Caption: Researchers have developed a fast, inexpensive robotic device that can find even tiny leaks in pipes with pinpoint precision, no matter what the pipes are made of.

Caption:
Researchers have developed a fast, inexpensive robotic device that can find even tiny leaks in pipes with pinpoint precision, no matter what the pipes are made of.

Caption:
The small, rubbery robotic device can be inserted into the water system through any fire hydrant. It then moves passively with the flow, logging its position as it goes. It detects even small variations in pressure by sensing the pull at the edges of its soft rubber skirt, which fills the diameter of of the pipe.

Access to clean, safe water is one of the world’s pressing needs, yet today’s water distribution systems lose an average of 20 percent of their supply because of leaks. These leaks not only make shortages worse but also can cause serious structural damage to buildings and roads by undermining foundations.

Unfortunately, leak detection systems are expensive and slow to operate — and they don’t work well in systems that use wood, clay, or plastic pipes, which account for the majority of systems in the developing world.

Now, a new system developed by researchers at MIT could provide a fast, inexpensive solution that can find even tiny leaks with pinpoint precision, no matter what the pipes are made of.

The system, which has been under development and testing for nine years by professor of mechanical engineering Kamal Youcef-Toumi, graduate student You Wu, and two others, will be described in detail at the upcoming IEEE/RSJ International Conference on Intelligent Robots and Systems (IROS) in September. Meanwhile, the team is carrying out tests this summer on 12-inch concrete water-distribution pipes under the city of Monterrey, Mexico.

The system uses a small, rubbery robotic device that looks something like an oversized badminton birdie. The device can be inserted into the water system through any fire hydrant. It then moves passively with the flow, logging its position as it goes. It detects even small variations in pressure by sensing the pull at the edges of its soft rubber skirt, which fills the diameter of of the pipe.

The device is then retrieved using a net through another hydrant, and its data is uploaded. No digging is required, and there is no need for any interruption of the water service. In addition to the passive device that is pushed by the water flow, the team also produced an active version that can control its motion.

Monterrey itself has a strong incentive to take part in this study, since it loses an estimated 40 percent of its water supply to leaks every year, costing the city about $80 million in lost revenue. Leaks can also lead to contamination of the water supply when polluted water backs up into the distribution pipes.

The MIT team, called PipeGuard, intends to commercialize its robotic detection system to help alleviate such losses. In Saudi Arabia, where most drinking water is provided through expensive desalination plants, some 33 percent is lost through leakage. That’s why that desert nation’s King Fahd University of Petroleum and Minerals has sponsored and collaborated on much of the MIT team’s work, including successful field tests there earlier this year that resulted in some further design improvements to the system, Youcef-Toumi says.

Those tests, in a mile-long section of 2-inch rusty pipe provided by Pipetech LLC, a pipeline service company in Al Khobar, Saudi Arabia, that frequently uses the same pipe system for validating and certifying pipeline technologies. The tests, in pipes with many bends, T-joints, and connections, involved creating an artificial leak for the robot to find. The robot did so successfully, distinguishing the characteristics of the leak from false alarms caused by pressure variations or changes in pipe size, roughness, or orientation.

“We put the robot in from one joint, and took it out from the other. We tried it 14 times over three days, and it completed the inspection every time,” Wu says. What’s more, it found a leak that was about one gallon per minute, which is one-tenth the minimum size that conventional detection methods can find on average, and a third as large as those systems can find under even the best of conditions.

These leakage issues are widespread. “In China, there are many newly built cities and they all use plastic water pipes,” says Honghai Bi, CEO of Banzan International Group, one of the largest suppliers for plastic pipe adhesives in China. “In those new pipe systems there is still about 30 percent of water lost due to leaks every day. Currently there is not an effective tool to locate leaks in those plastic pipes, and MIT PipeGuard’s robot is the disruptive change we have been looking for.”

The next step for the team, after the field tests in Monterrey, is to make a more flexible, collapsible version of their robot that can quickly adapt itself to pipes of different diameters. Under the steets of Boston, for example, there are a mix of 6-, 8- and 12-inch pipes to navigate — many of them installed so long ago that the city doesn’t even have accurate maps of their locations. The robot would expand “like an umbrella,” Wu says, to adapt to each pipe.

The value of the robot is not just for reducing water losses, but also for making water services safer and more reliable. “When a leak occurs, the force of the water flowing from underground can do serious structural damage undermining streets, flooding houses, and damaging other underground utilities. There is also the issue of loss of service to residents and business for extended period of time,” says Mark Gallager, director of engineering and distribution at the Cambridge, Massachusetts, Water Department. The ability of this system to detect much smaller leaks could enable early detection and repair, long before serious pipe breaks occur.

Gallager says, “If we had the capability to find leaks when they first appear or before they get to the point of critical failure, that could equate to preventing the loss of millions of gallons of water annually. It could minimize the damage to infrastructure and the loss of water services to homes and businesses, and it could significantly reduce the associated cost.”

Not only could the system find leaks in virtually any kind of water pipe, it could also be used for other kinds of pipe distribution systems, such as those for natural gas. Such pipes, which are often old and also poorly mapped, have produced serious gas buildups and even explosions in some cities, but leaks are hard to detect until they become large enough for people to smell the added odorants. The MIT system was actually first developed to detect gas leaks, and later adapted for water pipes.

Ultimately, the team hopes, the robot could not just find leaks but also be equipped with a special mechanism they have designed, so that, at least for smaller leaks, it could carry out an instant repair on the spot.

The device has already attracted a series of honors and awards. The team members won the $10,000 prize at the 2017 MIT Water Innovation competition, and they were finalists in the MIT $100K Entrepreneurship Competition, where they won another $10,000. In the $100K finals, they won yet another $10,000 for the Booz Allen Hamilton Data Analytics Award, and they were one of the 25 winners nationwide to receive a $10,000 2017 Infy Maker Award from Infosys Foundation.

One of the judges in that $100k competition, DKNY CEO Caroline Brown, said “PipeGuard has created a simple, pragmatic and elegant solution to a complex problem. … This robot is a great example of utilizing smart design to simplify complexity and maximize efficiency.”

The team presenting the results at the IROS conference includes Kristina Kim ’17 and Michael Finn Henry, a local high school student who was a summer intern at MIT. The founders of PipeGuard are Wu and MIT graduate students Jonathan Miller and Daniel Gomez.

Fast Company reporter Adele Peters highlights how MIT researchers have developed a robot that can swim through pipes and identify leaks. Peters writes that alumnus You Wu estimates that “if half of the leaks in the world could be found and fixed, that would recover enough water to support 1 billion people.”

MIT alumnus You Wu has spent six years perfecting robots that can travel through pipes to identify water leaks, writes Anne Quito for Quartz. “Over 240,000 water pipes burst in the US each year, with each incident costing an average of $200,000 in infrastructure damage,” notes Quito.

A new way to detect leaks in pipes