A new way to detect leaks in pipes 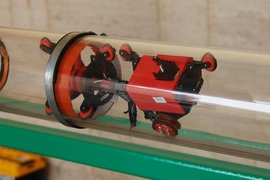 ↓ Download Image
Caption: A test version of the new detection system is seen in the lab, where it underwent tests inside glass tubes to allow its operation to be observed. The propulsion module, at right, is fitted with electric wheels and motors to move the device through the pipe. The leak sensor, at left, is a drum-shaped membrane that can sense changes in pressure caused by the presence of a leak.
Credits: Courtesy of the researchers 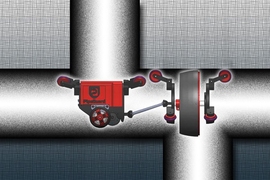 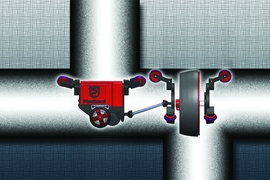 Caption:
A test version of the new detection system is seen in the lab, where it underwent tests inside glass tubes to allow its operation to be observed. The propulsion module, at right, is fitted with electric wheels and motors to move the device through the pipe. The leak sensor, at left, is a drum-shaped membrane that can sense changes in pressure caused by the presence of a leak.
Credits:
Photo: Courtesy of the researchers

Explosions caused by leaking gas pipes under city streets have frequently made headlines in recent years, including one that leveled an apartment building in New York this spring. But while the problem of old and failing pipes has garnered much attention, methods for addressing such failing infrastructure have lagged far behind.

Typically, leaks are found using aboveground acoustic sensors, which listen for faint sounds and vibrations caused by leakage, or in-pipe detectors, which sometimes use video cameras to look for signs of pipe breaks. But all such systems are very slow, and can miss small leaks altogether.

Now researchers at MIT and King Fahd University of Petroleum and Minerals (KFUPM) in Saudi Arabia have devised a robotic system that can detect leaks at a rapid pace and with high accuracy by sensing a large pressure change at leak locations. The concept was presented at two recent international conferences, and has been described in several recent papers.

This new system “can detect leaks of just 1 to 2 millimeters in size, and at relatively low pressure,” says Dimitrios Chatzigeorgiou, a PhD student in mechanical engineering at MIT and lead author of the research papers. “We’ve proved that the concept works.”

The researchers have begun discussions with gas companies and water companies — the system can also detect leaks in water pipes, or in petroleum pipelines — about setting up field tests under real-world conditions.

Chatzigeorgiou presented the concept this month at the International Conference on Robotics and Automation in Hong Kong, and at the American Control Conference in Portland, Ore.

Current acoustic tests are only effective for detecting sound and vibration in metal pipes, Chatzigeorgiou says; plastic pipes tend to dissipate the sounds too quickly. Such systems are also time-consuming and require expert operators, he says, whereas the small robotic device he and his collaborators have developed can move as fast as 3 mph through pipes, and are almost entirely automated. Ultimately, he says, such devices could be put into a system of pipes and left in place indefinitely, conducting automatic, nonstop monitoring of the system.

In addition to their potential for dangerous explosions, leaking gas pipes can be a significant contributor to global warming: Methane, the primary constituent of natural gas, is a greenhouse gas 25 times more potent than carbon dioxide. Leaks in water pipes can waste up to half the water in a system; oil-pipeline leaks can lead to toxic spills and prolonged, expensive cleanup operations. All of these systems could benefit significantly from improved leak-detection methods, Chatzigeorgiou says.

While existing detection systems work under certain conditions, Chatzigeorgiou says, there is not yet an approach that can efficiently detect leaks in any of these pipe systems. “We believe this can solve the general problem,” he says: The new device could be produced in various sizes to fit different kinds of pipes, and should be effective in gas, water, and oil pipes.

MIT mechanical engineering professor Kamal Youcef-Toumi, a co-author of the research papers, adds, “This technology allows for an unambiguous and reliable sensing of very small leaks that often go undetected for long periods of time.”

The current device consists of two parts: a small robot, with wheels to propel it through pipes (or, in some cases, to simply be swept along by flowing liquid), and a drum-like membrane that forms a seal across the width of the pipe. When a leak is encountered, liquid flowing toward it distorts the membrane, pulling it slightly toward the leak site. That distortion can be detected by force-resistive sensors via a carefully designed mechanical system (similar to the sensors used in computer trackpads), and the information sent back via wireless communications.

Detecting leaks by sensing a pressure gradient close to leak openings is a novel idea, Chatzigeorgiou says, and key to the effectiveness of this method: This approach can sense a rapid change in pressure close to the leak itself, providing pinpoint accuracy in locating leaks. It also allows for relatively rapid monitoring of large systems: At present, the 3 mph top speed of the device is imposed by the propulsion motors, not the detector itself, so faster surveying is possible.

Because of the sensitivity of the membrane, Chatzigeorgiou and his colleagues believe the system can detect leaks one-tenth to one-twentieth the size of those that can be detected by most of the existing methods. At present, the system requires a fairly uniform pipe diameter, but the researchers are working on a version that will have more flexibility to deal with variations caused by damage, obstacles, or scale buildup inside pipes.

Co-author Rached Ben-Mansour, a professor of mechanical engineering at KFUPM, says that current leak-detection systems are quite expensive, typically costing $250,000 annually to monitor 100 kilometers of pipe. “We’re hoping this system will be much more affordable,” he says, as well as faster and more sensitive.

Arnold Scott, vice chairman and director of First Commons Bank, who was not involved in this research but mentored the group in the MIT $100K Entrepreneurship Competition, says this approach “is very important because of its size. It is the only [inspection device] small enough to fit inside of a 4-inch pipe. Many modern water systems are built using 4-inch pipe, so being able to inspect this pipe diameter is very important. Another important element is the reporting mechanism. Using GPS, this [device] can specifically locate and report the location of a leak in a pipe.”

The research was supported by KFUPM through the Center for Clean Water and Energy at MIT.

Alexandra Ossola of Popular Science features Prof. Kamal Youcef-Toumi’s work developing an autonomous robot to patrol pipes for leaks. “The two-liter-bottle-size prototype cruises through pipes at up to 3 miles per hour in search of subtle pressure differences that indicate a loss of fluids,” writes Ossola.

MIT, King Fahd University of Petroleum and Minerals in collaboration