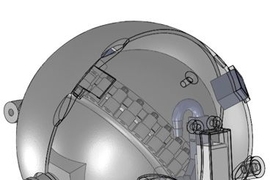 ↓ Download Image
Caption: A spherical robot equipped with a camera may navigate underground pipes of a nuclear reactor by propelling itself with an internal network of valves and pumps.
Credits: Image: Harry Asada/d'Arbeloff Laboratory

Caption:
A spherical robot equipped with a camera may navigate underground pipes of a nuclear reactor by propelling itself with an internal network of valves and pumps.
Credits:
Image: Harry Asada/d'Arbeloff Laboratory
As workers continue to grapple with the damaged Fukushima Daiichi nuclear powerplant in Japan, the crisis has shone a spotlight on nuclear reactors around the world. In June, The Associated Press released results from a yearlong investigation, revealing evidence of “unrelenting wear” in many of the oldest-running facilities in the United States.

That study found that three-quarters of the country’s nuclear reactor sites have leaked radioactive tritium from buried piping that transports water to cool reactor vessels, often contaminating groundwater. According to a recent report by the U.S. Government Accountability Office, the industry has limited methods to monitor underground pipes for leaks.

“We have 104 reactors in this country,” says Harry Asada, the Ford Professor of Engineering in the Department of Mechanical Engineering and director of MIT’s d’Arbeloff Laboratory for Information Systems and Technology. “Fifty-two of them are 30 years or older, and we need immediate solutions to assure the safe operations of these reactors.”

Asada says one of the major challenges for safety inspectors is identifying corrosion in a reactor’s underground pipes. Currently, plant inspectors use indirect methods to monitor buried piping: generating a voltage gradient to identify areas where pipe coatings may have corroded, and using ultrasonic waves to screen lengths of pipe for cracks. The only direct monitoring requires digging out the pipes and visually inspecting them — a costly and time-intensive operation.

Now Asada and his colleagues at the d’Arbeloff Laboratory are working on a direct monitoring alternative: small, egg-sized robots designed to dive into nuclear reactors and swim through underground pipes, checking for signs of corrosion. The underwater patrollers, equipped with cameras, are able to withstand a reactor’s extreme, radioactive environment, transmitting images in real-time from within.

The group presented details of its latest prototype at the 2011 IEEE International Conference on Robotics and Automation.

At first glance, Asada’s robotic inspector looks like nothing more than a small metallic cannonball. There are no propellers or rudders, or any obvious mechanism on its surface to power the robot through an underwater environment. Asada says such “appendages,” common in many autonomous underwater vehicles (AUVs), are too bulky for his purposes — a robot outfitted with external thrusters or propellers would easily lodge in a reactor’s intricate structures, including sensor probes, networks of pipes and joints. “You would have to shut down the plant just to get the robot out,” Asada says. “So we had to make [our design] extremely fail-safe.”

He and his graduate student, Anirban Mazumdar, decided to make the robot a smooth sphere, devising a propulsion system that can harness the considerable force of water rushing through a reactor. The group devised a special valve for switching the direction of a flow with a tiny change in pressure and embedded a network of the Y-shaped valves within the hull, or “skin,” of the small, spherical robot, using 3-D printing to construct the network of valves, layer by layer. “At the end of the day, we get pipelines going in all … directions,” Asada says. “They’re really tiny.”

Depending on the direction they want their robot to swim, the researchers can close off various channels to shoot water through a specific valve. The high-pressure water pushes open a window at the end of the valve, rushing out of the robot and creating a jet stream that propels the robot in the opposite direction.

As the robot navigates a pipe system, the onboard camera takes images along the pipe’s interior. Asada’s original plan was to retrieve the robot and examine the images afterward. But now he and his students are working to equip the robot with wireless underwater communications, using laser optics to transmit images in real time across distances of up to 100 meters.

The team is also working on an “eyeball” mechanism that would let the camera pan and tilt in place. Graduate student Ian Rust describes the concept as akin to a hamster ball.

“The hamster changes the location of the center of mass of the ball by scurrying up the side of the ball,” Rust says. “The ball then rolls in that direction.”

To achieve the same effect, the group installed a two-axis gimbal in the body of the robot, enabling them to change the robot’s center of mass arbitrarily. With this setup, the camera, fixed to the outside of the robot, can pan and tilt as the robot stays stationary.

Asada envisions the robots as short-term, disposable patrollers, able to inspect pipes for several missions before breaking down from repeated radiation exposure.

“The system has a simplicity that is very attractive for deployment in hostile environments,” says Henrik Christensen, director of the Center for Robotics and Intelligent Machines at the Georgia Institute of Technology. Christensen, who was not involved in the work, observed that robots such as Asada’s could be useful not only for monitoring nuclear reactors, but also for inspecting other tight, confined spaces — sprawling city sewer pipes, for example. “One would like to have a system that can be deployed at a limited cost and risk, so an autonomous system of minimal size is very attractive,” he says.