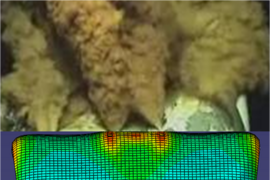 ↓ Download Image
Caption: MIT researchers found a near-perfect match between their pipeline fracture simulation (bottom) and an image of the Deepwater Horizon's ruptured pipeline taken by an underwater robot.

Caption:
MIT researchers found a near-perfect match between their pipeline fracture simulation (bottom) and an image of the Deepwater Horizon's ruptured pipeline taken by an underwater robot.

As a case study, the team simulated the forces involved in the 2010 Deepwater Horizon explosion in the Gulf of Mexico, finding that their model accurately predicted the location and propagation of cracks in the oil rig’s drill riser — the portion of pipe connecting the surface drilling platform to the seafloor. In a side-by-side comparison, the researchers found that their model’s reconstruction closely resembled an image of the actual fractured pipe taken by a remotely operated vehicle shortly after the accident occurred. The group presented their results at the International Offshore and Polar Engineering Conference in June.

Tomasz Wierzbicki, professor of applied mechanics at MIT, says such a simulation could help oil and gas companies identify stronger or more flexible pipe materials that could help minimize the impact of a future large-scale accident.

“We are looking at what would happen during a severe accident, and we’re trying to determine what should be the material that would not fail under those conditions,” Wierzbicki says. “For that, you need technology to predict the limits of a material’s behavior.”

Wierzbicki has already laid much of the foundation for what he calls Fracture Predictive Technology through his work in car-crash safety testing. Over the years, he’s fine-tuned a testing method that combines physical experiments with computer simulations to predict the strength and behavior of materials under severe impacts.

For example, to safety-test materials used in automobile bodies, Wierzbicki first cuts small samples from a candidate such as steel, using a high-pressure water jet. He then sprays the sample with a fine pattern of speckles, covering the surface with tiny dots. After the spray dries, Wierzbicki clamps the cutout into a machine, which subjects specimens to different types of loading. A motion-capture camera, set up in front of the sample, takes images as it crumples, sending the images to a computer, which plots the image’s dots along a grid to show exactly when and where deformations occur.

By testing different shapes and sizes of materials under various pressures, Wierzbicki can determine a material’s overall mechanical properties, such as its strength and ductility. Knowing this, he says, it’s possible to create a simulation to predict a material’s behavior in any configuration, under any conditions. Determining the exact limits for materials is especially important for offshore drilling, he says, where pipes are continually subjected to tremendous pressures at great depths.

Wierzbicki and graduate students Kirki Kofiani and Evangelos Koutsolelos used the same principles to predict the strength and breaking points of the Deepwater Horizon’s drill riser.

Since the researchers were unable to obtain a sample from the actual collapsed riser, they consulted an offshore-drilling handbook, finding that the riser was likely made from X70, a grade of steel commonly used in such risers. The material’s mechanical properties closely matched those of TRIP 690, a grade of steel the team had previously tested in the lab.

The researchers drew up a computer model of the drill riser — a large-diameter pipe attached at one end to a large rectangle, representing the surface drilling platform. The team then ran a simulation that partially reconstructed the Deepwater Horizon accident: After methane gas erupted and shot to the surface, setting the entire platform on fire, the oil rig began to list and sink. The researchers simulated the sinking by slowly angling the rectangular platform downward.

As a result, the attached drill riser began to bend. A color-coded simulation showed points along the pipe where it was likely to crack: Green and blue meant the material was intact; yellow and red indicated it was at its breaking point. The group found four red areas where cracks — and oil leaks — were especially likely to occur.

The group had one point of comparison: an image, taken by an underwater robot shortly after the accident, of the ruined pipe. When the researchers compared their model with the real-life image, they found an almost perfect match.

Wierzbicki sees the results as an encouraging first step in applying the model to materials for offshore drilling.

Jorgen Amdahl, a professor in the Department of Marine Technology at the Norwegian University of Science and Technology, says the model’s main advantage is its ability to predict a pipe’s response under many different scenarios, from normal operations to severe accidents.

“It takes into account all ranges of stress states,” Amdahl says. “The approach will be very useful for the oil and gas industry with respect to assessment of pipe behavior under accidental stresses,” he says, such as severe deformations from capsizing, explosions, fires and earthquakes.

While it’s unlikely that any pipe material could have remained intact during the Deepwater Horizon disaster, Wierzbicki says there are many improvements that can be made to shore up existing oil and gas pipelines. He and his group, whose research is partly sponsored by Royal Dutch Shell, will be analyzing samples from retired offshore pipes in the next few months.

“The deeper you go in the ocean, two or three miles down, the stronger material you need to withstand the pressure,” Wierzbicki says. “But stronger materials are more brittle and break more easily. So there’s a difficult problem for the offshore industry, and I think they can learn a lot from us.”