Rahm Emanuel: The city is where the action is 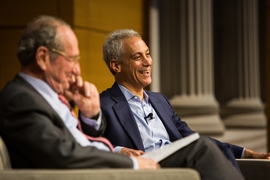 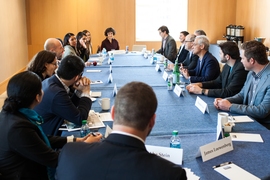 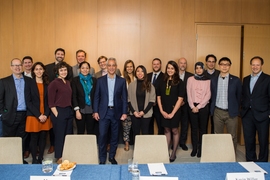 ↓ Download Image
Caption: “My view of the world is that people start dropping out of college in third grade,” Emanuel said, pictured here after the roundtable discussion. “They do not drop out freshman year. The biggest thing we can do for the education gap between rich and poor is early-childhood education. You have got to get to kids early enough in life to give them the exposure to education.”

Caption:
“A hundred cities around the world today drive the economic, intellectual, and cultural energy of the world economy,” Chicago Mayor Rahm Emanuel (right) told an audience of nearly 300 in the Wong Auditorium on April 14. In a conversation moderated by Institute Professor John Deutch (left), Emanuel discussed several new initiatives in Chicago and offered his views on issues ranging from early childhood education, to immigration, to criminal justice.
Credits:
Photo: Jake Belcher

Caption:
“My view of the world is that people start dropping out of college in third grade,” Emanuel said, pictured here after the roundtable discussion. “They do not drop out freshman year. The biggest thing we can do for the education gap between rich and poor is early-childhood education. You have got to get to kids early enough in life to give them the exposure to education.”
Credits:
Photo: Jake Belcher

Chicago Mayor Rahm Emanuel laid out a case for bold action at the city level to make progress on education, inequality, climate change, and technology, in a wide-ranging talk at MIT on Friday afternoon.

“A hundred cities around the world today drive the economic, intellectual, and cultural energy of the world economy,” he told an audience of nearly 300 in the Wong Auditorium.

In a conversation moderated by Institute Professor John Deutch and opened by MIT President L. Rafael Reif, Emanuel discussed several new initiatives in Chicago and offered his own views on issues ranging from early childhood education to immigration to criminal justice. During his visit to campus, the mayor also met with selected MIT community members to discuss sustainability, urban innovation, and entrepreneurship.

Citing ongoing “political dysfunction” at the federal level, Emanuel argued in his Friday talk that the only realm of action right now “that can tip the scale, from the public sector arena, is the city.”

Emanuel has been mayor of Chicago since 2011, winning re-election in 2015. One of the nation’s most prominent Democrats, he served as President Barack Obama’s first chief of staff, as a three-term congressman representing Chicago’s 5th District from 2003 to 2009, and as a senior advisor to President Bill Clinton.

Deutch posed questions selected from over 200 submitted by MIT students, staff, and faculty ahead of the event. Several focused on Chicago’s education system.

Noting that — after turning down a ballet scholarship, and before entering politics — he almost went to graduate school to study early childhood development, Emanuel touted his administration’s efforts to expand access to early childhood education.

“My view of the world is that people start dropping out of college in third grade,” he said. “They do not drop out freshman year. The biggest thing we can do for the education gap between rich and poor is early-childhood education. You have got to get to kids early enough in life to give them the exposure to education.”

As mayor, he has accordingly made expanding funding for full-day kindergarten across the Chicago Public Schools system one of his top priorities. But he lamented the lack of investment in such programs from the federal government.

“Outside of Head Start and SCHIP,” Emanuel said with exasperation (referring to the State Children’s Health Insurance Program passed under President Clinton in 1997), “you cannot find a distinct program that the federal government has set up just for kids. On support for education, the U.S. government is AWOL.”

In the absence of that support, he offered examples of solutions, such as increasing the length of the school day by an hour and a half, and increasing access to International Baccalaureate schools in Chicago, which now has the largest IB program in the U.S.

Emanuel said he had learned that some families were moving out of the city because it was so hard to get their children enrolled in the city’s top magnet schools, and that participation in IB programs led to higher college matriculation rates than this type of selective enrollment approach.

“This is an example of why I want to be here and work with all of you” at MIT, he said. “That idea came out of the University of Chicago Urban Education Lab.”

“I would not be in public life if weren’t for things like the ballet that I did, which taught me discipline and how to take criticism without taking it personally,” he said to laughs in the audience, perhaps in reference to his notoriously combative political persona.

Emanuel said he also sees education as key to solving criminal justice crises such as the disproportionate incarceration of people of color.

“For a whole host of reasons, if you go to a state jail today, the majority of people in that jail are young men of color between the ages of 19 and 25, without a high school degree,” Emanuel said. “Give a young man a high school diploma, they have a tomorrow, and they’re thinking about tomorrow.”

When Deutch asked about his plans to maintain Chicago’s status as a “sanctuary city” (i.e., limiting cooperation with the federal government in deporting illegal immigrants) despite the Trump administration’s threats to cut federal funding to the city, Emanuel was defiant.

“Chicago will always be a welcoming city,” he said. “There is only one city in the U.S. in 1850 that said they would not participate in the Fugitive Slave Act: the city of Chicago. We’re not turning our back on the future or on people that believe in the American Dream.”

In the next few weeks, he said, the Chicago city council will pass a new municipal ID law, providing identification cards that undocumented people can use to access city services.

Then he sounded a personal note. “This is the 100-year anniversary of my grandfather coming to Chicago, 13 years old, by himself, from a little shtetl in Moldovia. He didn’t know a word of English. He met a third cousin he never knew, and in two generations his grandson is the mayor. This country has always welcomed people.”

Emanuel also touted Chicago’s ongoing rise as a hub for tech startups, pointing to the development of several new digital fabrication and innovation spaces along the Chicago River, and successful efforts to attract major companies such as Siemens and General Electric to build up their Chicago operations. With universities such as the University of Chicago, Northwestern University, Loyola University, and DePaul University, and two national research laboratories (Argonne and Fermilab) nearby, Emanuel said the city is primed to continue growing as an epicenter for research innovation.

He mentioned that the most recent “Global Technology Innovation” report from the professional services firm KPMG rated Chicago sixth in the world in its rankings of the world’s best technology hubs outside of Silicon Valley.

“We were late to the game, but now we’re ahead of Tel Aviv and Boston. It’s not my study — it’s KPMG’s, so don’t get upset,” Emanuel said to laughs from the audience.

Emanuel also ticked off his administration’s achievements in reducing the city’s greenhouse gas emissions, even as its economic activity has grown. Since he became mayor, the last two coal-fired power plants operating in the city were shut down. Chicago is embarking on a three-year project to convert all street light bulbs to LEDs, and has 50 million square feet undergoing energy retrofits, he said.

“Our greenhouse gas emissions are down 7 percent over the same period of time they have gone up 1 percent in the U.S.” overall, he said.

Deutch closed the conversation by asking Emanuel if he would ever consider running for national office.

He made it clear that he enjoys his current job, and that, for someone with ambition, being mayor of a major city is the ideal position in our current political climate.

“I disagree with the analysis that the 2016 elections were all about economics,” Emanuel said. “There is a reason people are taking a bat and beating the political system, whether it’s Brexit or our own election. It is a reaction to the political dysfunction in addressing fundamental social and economic issues.”

But a turn to the local, to the urban scale, offers hope for progress, he suggested.

The municipal level, he said, “is the form of government that people feel is most intimate and immediate to how they organize their lives. In a time in which they think their ability to influence things is getting distant, they want a government that's more in tune, one where they can affect its policies and outcomes. That's why being a mayor today is the most exciting thing to do, and especially in a city that gave my grandfather a shot at the American Dream.”

3Q: Dennis Frenchman on the rise of innovation districts in Cambridge and beyond