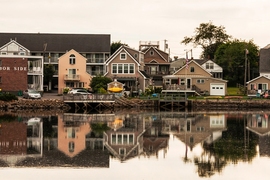 Perhaps you have heard the adage “think globally, act locally.” An MIT-led project taking that idea to heart has demonstrated a new method for getting local citizens and leaders to agree on the best ways of managing the immediate and long-term effects of climate change.

The New England Climate Adaptation Project (NECAP) got local citizens and officials in four coastal towns to engage in role-playing games about climate change tailored to their communities, while conducting local polling about attitudes and knowledge about climate risks. In so doing, the project helped the towns reach new conclusions about local initiatives to address the threats posed by climate change— which in coastal communities may include rising sea levels and increased storm surges that can lead to flooding.

“One hour of conversation can completely alter people’s sense [and show] that this is a problem they can work on locally,” says Lawrence Susskind, the Ford Professor in Urban Studies in MIT’s Department of Urban Studies and Planning (DUSP), who led the project and has now co-authored a new book detailing its results. “There are a bunch of things local governments can do, and people can do for themselves — that communities can do.”

The findings stem from years of research and organizing in four places: Wells, Maine; Dover, New Hampshire; Barnstable, Massachusetts; and Cranston, Rhode Island. The new book on the effort, “Managing Climate Risks in Coastal Communities,” has just been released by the academic publisher Anthem Press.

Among the many findings of the project is that residents of these coastal communities were typically far more concerned about the consequences of climate change than local politicians realized.

“People in official positions really underestimated the extent to which [citizens] were worried about what climate change might mean to the town, what their vulnerabilities were,” Susskind explains. “If you asked, ‘What percentage of people do you think believe climate change is a problem right now?’ most officials would have said less than 10 percent. Our polling results were about 60 percent.”

The scenarios that the MIT-led team presented to people in each place involved ranges of probability regarding potential events. And yet, Susskind emphasizes, certain types of climate responses, like building better storm drains, may be necessary in almost any scenario.

“Lots of uncertainty doesn’t mean you can’t decide or know what to do,” Susskind says. “There are no-regrets actions you can take, where you won’t regret spending the money, time, or effort later.”

The scholars chose the four towns because each hosts a center for the National Estuarine Research Reserve System, a branch of the National Oceanic and Atmospheric Administration. That made it simpler for the project leaders to make connections with local political leaders and convince them to participate in the climate adaptation project.

The book is co-authored by four project leaders, including Susskind, who heads the Environmental Policy and Planning Group at DUSP as well as the mediation group he founded, the Consensus Building Institute (CBI); Danya Rumore, visiting assistant professor at the University of Utah; Carrie Hulet, a senior associate at the CBI; and Patrick Field, co-managing director of the CBI and an associate director of the MIT-Harvard Public Disputes Program.

After developing climate-change scenarios for each town and conducting research on local political priorities and infrastructure, starting in 2012, the MIT group developed a role-playing game tailored to each town, and conducted debriefings on the issues as well. Citizens who participate study the local climate scenarios and potential responses, and try to reach consensus on plans of action. An investment of a few hours can suddenly make hundreds of community members more informed and willing to consider the need for climate response.

“The science doesn’t dictate things, but it informs things, and it leads to interesting conversations about what the policy for their own community should be,” Susskind says.

In Dover, for instance, the effort helped clarify the need to act on local concerns about flooding from the town’s river, and about the capabilities of the town’s storm drains; dredging the river and updating the drains are now higher priorities, along with having more generators on hand for emergency response activities. In Barnstable, where sea level rise, flooding, drought, and storm damage are all problematic issues, the project clarified the need to add water supplies and make the electrical grid more sustainable.

In Wells, where sea levels are projected to rise by 2 to 5 feet by 2099, the project highlighted the need for seawalls and a buyback program for privately owned coastal land that could absorb flooding. In Cranston, flooding is a major issue — following floods the town experienced in 2010 — and the project revealed that 86 percent of residents are concerned about climate change. Possible measures include engineered barriers and expanded wetlands, but the project also reveals a need for continued public education programs about the affordability of possible responses.

Still, acting sooner rather than later, Susskind suggests, will usually turn out to be a wise investment.

“Don’t be convinced that was a one-time flood,” he says. “It’s going to happen sooner and more often than you think, and the cost could be enormous without some effort to manage risks. And maybe as a community you say, ‘Bad things are going to happen unless we find some way to reduce our vulnerabilities.’”

Adaptation, as well as mitigation

The MIT-led project dealt with climate adaptation, the response to climate change risks. As Susskind acknowledges, that is only one part of the climate-action picture; the issue of climate mitigation — that is, preventing climate change from happening to the fullest extent possible — is also vital.

And while the role-playing games were limited to smaller communities, Susskind acknowledges, he thinks this approach can work in much larger municipalities as well, based on similar work he has done in Maryland and other places.

“I don’t think there are any problems of scaling up,” he says.

Other scholars have found the project and its results to be valuable. Judith Innes, a professor emerita of city and regional planning at the University of California at Berkeley, calls it an “eye-opening book” that offers “hope and guidance to policy makers and citizens who want to act before it is too late.”

The researchers have put many materials online, available for public study. However, Susskind says, there is no substitute for participating in the project’s games in person, to work through issues of evaluating a town’s needs and negotiating over them.

“The whole point politically is to organize a constituency for change in each locality, and that requires face-to-face interaction,” Susskind says. “There’s no substitute. I design different games for different places. You have to tailor it so that people get a sense they’re learning something about the place where they are. It’s about empowering a community to feel we can and should be working to anticipate and manage climate risks.”

Study: Climate strategy focused on local impacts is most effective with Americans