Harnessing the right amount of sunshine 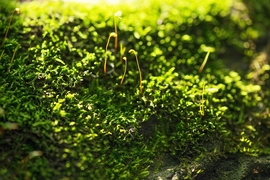 ↓ Download Image
Caption: Researchers have discovered how moss and green algae can protect themselves from too much sun.

Caption:
Researchers have discovered how moss and green algae can protect themselves from too much sun.

Photosynthesis, which allows energy from the sun to be converted into life-sustaining sugars, can also be hazardous to green plants. If they absorb too much sunlight, the extra energy destroys their tissue.

To combat this, green plants have developed a defense mechanism known as photoprotection, which allows them to dissipate the extra energy. Researchers from MIT and the University of Verona have now discovered how the key protein in this process allows moss and green algae to protect themselves from too much sun.

The researchers found that the protein, embedded in the membranes in the chloroplast, can switch between different states in response to changes in sunlight. When moss and green algae absorb more sunlight than they need, this protein releases the energy as heat, preventing it from building up and damaging the cells. The protein can act within seconds of a change in sun exposure, such as when the sun appears from behind a cloud.

“These photoprotective mechanisms have evolved from the fact that sunlight is not constant. There are sunny days; there are cloudy days. Clouds may briefly pass over, or the plant can be transiently in the shade,” says Gabriela Schlau-Cohen, an MIT assistant professor of chemistry and the senior author of the study.

Learning more about how this protein works could allow scientists to alter it in a way that would promote more photosynthesis, potentially increasing the biomass yield of both crops and algae grown for biofuels, Schlau-Cohen says.

During photosynthesis, specialized proteins known as light-harvesting complexes, with the help of pigments such as chlorophyll, absorb light energy in the form of photons. These photons drive a series of reactions that produce sugar molecules, allowing plants to store energy for later use.

Most plants absorb far more sunlight than they can actually use. In very sunny conditions, they convert only about 30 percent of the available sunlight into sugar, while the rest is released as heat.

“Under sunny conditions, the plants have energy sitting around that is too much for the capacity of the rest of the molecular machinery,” Schlau-Cohen says.

If this energy is allowed to remain in the plant cells, it creates harmful molecules called free radicals that can damage proteins and other important cellular molecules.

It was discovered several years ago that a protein called light-harvesting complex stress-related 1 (LHCSR1) is the major player in photoprotection that occurs over short timescales (seconds to minutes) in green algae and moss. This protein is embedded in the membranes in the chloroplast and interacts with chlorophyll and carotenoids, another type of light-absorbing pigment. However, the mechanism of how this photoprotection works was not known.

In this study, Schlau-Cohen and her colleagues used a very sensitive microscope that can analyze single proteins to determine how the LHCSR1 protein found in moss reacts to different light conditions. They discovered that the protein can assume three distinct conformations, which correspond to different functions.

Under cloudy or shady conditions, LHCSR1 simply absorbs photons and passes the energy on into the rest of the photosynthetic machinery. When the sun comes out and energy intake rises, LHCSR1 switches to another conformation within seconds. This switch is caused by a decrease in pH, which occurs when too many hydrogen ions are generated by water-splitting during photosynthesis.

When this occurs, the protein becomes locked into a rigid structure that allows it to convert more of the absorbed light energy into heat, through a mechanism that is not fully known.

Photoprotection can also be turned on more gradually by another feedback mechanism involving pH. A decrease in pH activates an enzyme that changes the molecular composition of a carotenoid that interacts with LHCSR1. This leads the protein to favor and stabilize its photoprotective state.

Green plants tend to turn on photoprotection very quickly in response to sun, and they are slow to turn it off, Schlau-Cohen says. That helps plants to survive, but it means that they are not producing as much biomass as they could. A study published in Science last November showed that speeding up plants’ ability to turn off photoprotection could boost biomass production by 15 percent under natural field conditions.

Schlau-Cohen’s colleagues at the University of Verona are now creating mutated versions of the LHCSR1protein, which the researchers plan to test to see if they have the ability to produce more biomass while still offering some photoprotection.

“Photoprotection is critical for fitness, so if you knock out photoprotection altogether they don’t grow very well,” Schlau-Cohen says. “We can look at what pieces of this process are responsible for which parts of the photoprotective loop, and then we can be a little bit smarter about what we overexpress and what we knock out.”

The research was funded by the Center for Excitonics, an Energy Frontier Research Center funded by the U.S. Department of Energy; a CIFAR Azrieli Global Scholar Award; and the European Economic Community projects AccliPhot and SE2B.

The rocky world, with its baking-hot surface, is likely not habitable.