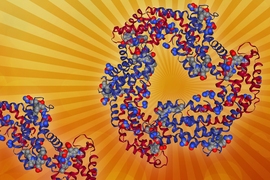 Caption:
This photosynthetic antenna consists of several pigments, which collect light energy, and their associated proteins.
Credits:
Image courtesy of the researchers (edited by MIT News)

Plants and other photosynthetic organisms use a wide variety of pigments to absorb different wavelengths of light. MIT researchers have now developed a theoretical model to predict the spectrum of light absorbed by aggregates of these pigments, based on their structure.

The new model could help guide scientists in designing new types of solar cells made of organic materials that efficiently capture light and funnel the light-induced excitation, according to the researchers.

“Understanding the sensitive interplay between the self-assembled pigment superstructure and its electronic, optical, and transport properties is highly desirable for the synthesis of new materials and the design and operation of organic-based devices,” says Aurelia Chenu, an MIT postdoc and the lead author of the study, which appeared in Physical Review Letters on Jan. 3.

Photosynthesis, performed by all plants and algae, as well as some types of bacteria, allows organisms to harness energy from sunlight to build sugars and starches. Key to this process is the capture of single photons of light by photosynthetic pigments, and the subsequent transfer of the excitation to the reaction centers, the starting point of chemical conversion. Chlorophyll, which absorbs blue and red light, is the best-known example, but there are many more, such as carotenoids, which absorb blue and green light, as well as others specialized to capture the scarce light available deep in the ocean.

These pigments serve as building blocks that can be arranged in different ways to create structures known as light-harvesting complexes, or antennae, which absorb different wavelengths of light depending on the composition of the pigments and how they are assembled.

“Nature has mastered this art, evolving from a very limited number of building blocks an impressive diversity of photosynthetic light-harvesting complexes, which are highly versatile and efficient,” says Chenu, who is also a fellow of the Swiss National Science Foundation.

These antennae are embedded in or attached to membranes within cell structures called chloroplasts. When a pigment captures a photon of light, one of its electrons becomes excited to a higher energy level, and that excitation is passed to nearby pigments along a network that eventually leads to the reaction center. From that center, the available charge travels further through the photosynthetic machinery to eventually drive the transformation of carbon dioxide into sugar through a cycle of chemical reactions.

Chenu and Jianshu Cao, an MIT professor of chemistry and the paper’s senior author, wanted to explore how the organization of different pigments determines the optical and electrical properties of each antenna. This is not a straightforward process because each pigment is surrounded by proteins that fine-tune the wavelength of the photon emitted. These proteins also influence the transfer of excitation and cause some of the energy to dissipate as it flows from one pigment to the next.

Chenu and Cao’s new model uses experimental measurements of the spectrum of light absorbed by different pigment molecules and their surrounding proteins. Using this information as input, the model can predict the spectrum of light absorbed by any aggregation, depending on the types of pigments it comprises. The model can also predict the rate of energy transfer between each aggregate.

This technique has a long history in physics, and theorists have previously applied it to studying disordered solids, dipolar liquids, and other systems.

“This paper represents a novel extension of this technique to treat dynamic fluctuations arising from the coupling between pigments and protein environments,” Cao says.

The model provides, for the first time, a systematic link between the structure of antennae and their optical and electrical properties. Scientists working on designing materials that absorb light, using quantum dots or other types of light-sensitive materials, could use this model to help predict what kinds of light will be absorbed and how energy will flow through the materials, according to the antenna structure, Chenu says.

“The very long-term goal would be to have design principles for artificial light harvesting,” she says. “If we understand the natural process, then we can infer what is the ideal underlying structure, such as the coupling between pigments.”

The researchers are now working on applying the model to a photosynthetic antenna known as the phycobilisome, which is the light-harvesting complex found in most cyanobacteria, as well as to nanostructures such as polymers, thin films, and nanotubes.

Secret of efficient photosynthesis is decoded