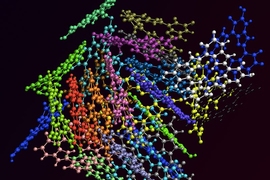 ↓ Download Image
Caption: A snapshot from a molecular dynamics simulation shows the geometric order and disorder characteristics of eumelanin aggregate structures. The different variations of the eumelanin molecules are shown in different colors for clarity. 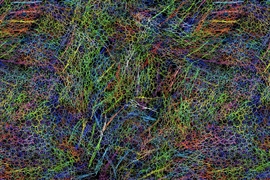 ↓ Download Image
Caption: A snapshot from a molecular dynamics simulation shows the geometric order and disorder characteristics of eumelanin aggregate structures. The different variations of the eumelanin molecules are shown in different colors for clarity.

Caption:
A snapshot from a molecular dynamics simulation shows the geometric order and disorder characteristics of eumelanin aggregate structures. The different variations of the eumelanin molecules are shown in different colors for clarity.

Caption:
A snapshot from a molecular dynamics simulation shows the geometric order and disorder characteristics of eumelanin aggregate structures. The different variations of the eumelanin molecules are shown in different colors for clarity.

Melanin — and specifically, the form called eumelanin — is the primary pigment that gives humans the coloring of their skin, hair, and eyes. It protects the body from the hazards of ultraviolet and other radiation that can damage cells and lead to skin cancer, but the exact reason why the compound is so effective at blocking such a broad spectrum of sunlight has remained something of a mystery.

Now researchers at MIT and other institutions have solved that mystery, potentially opening the way for the development of synthetic materials that could have similar light-blocking properties. The findings are published this week in the journal Nature Communications by graduate students Chun-Teh Chen and Chern Chuang, professor of civil and environmental engineering Markus Buehler, and three others.

Although eumelanin has been known for decades, pinning down its molecular structure, and identifying the reasons for its broadband light absorption, have been daunting tasks. This is, in part, because of the very characteristics that make it so interesting: Typically, the constituents of a chemical compound can be determined through spectroscopy, among other tools, but in the case of eumelanin the spectrographs don’t show the sharp peaks that are ordinarily useful in identification. So indirect means of analysis were needed.

The team used a combination of computation and experimental analysis to derive the structure of the material, finding that a major source of the broadband absorption was the physical arrangement of the constituents, not their chemical characteristics. Specifically, the combination of disorder and order in the physical arrangement produces a “smearing” of the material’s spectral absorption, and providing its crucial broadband blocking ability.

“You can’t do traditional analytical chemistry on this particular system,” Chuang, a graduate student in chemistry, says, “where you isolate each component. Only indirect ways of probing” can be used, he says.

The disorder that turned out to be key, the team says — a physical disorder called “geometric disorder” — is different from the chemical disorder that other researchers have studied. It turns out that both kinds of disorder may play a complementary role in producing eumelanin’s broadband absorption.

The material forms tiny crystals — a chemically ordered state — but with intrinsic randomness, such that the orientations of the stacked molecules can be arbitrary and the sizes of the crystals different, forming aggregate structures that are highly disordered. That combination of order and disorder contributes to eumelanin’s broadband absorption, the team found.

“It’s a naturally existing nanocomposite,” Buehler says, “that has very critical macroscopic properties as a result of the nanostructure.”

While eumelanin molecules all share a basic chemistry, more than 100 variations of that composition exist; the slight variations from one molecule to another may contribute to the disorder that broadens the ability to absorb light, Buehler says. “The jury is still out on which is more important,” he says.

Understanding the origins of eumelanin’s optical properties could help guide the creation of new synthetic materials, Buehler says. These insights may be useful in developing materials for applications such as pigments, he says, or in improving the efficiency of solar cells.

While this analysis still leaves open questions about the precise structure of eumelanin molecules, Buehler says, “Building an accurate structural model is one of our big aims.”

A similar combination of computational modeling based on quantum mechanics, molecular dynamics, and direct observation using electron microscopy “can probably be applied to many systems,” Buehler says. “It’s a methodological advance that is validated because this system has such unique optical properties, which we can reproduce. It shows the method can be useful.”

Sergei Tretiak, a researcher in the theoretical division at Los Alamos National Laboratory who was not involved in this research, says that understanding eumelanin’s structure was “a scientific puzzle for a long time.” The new work, he says, “provides a somewhat unexpected answer to this conundrum.” The researchers’ approach, he says, “exemplifies a multidisciplinary approach to [a] complex problem, where a single method is unable to provide a satisfying answer.”

The research team also included Jianshu Cao, a professor of chemistry at MIT, Vincent Ball at the University of Strasbourg in France, and David Ruch at the Centre de Recherche Public Henri Tudor in Luxembourg. The work was partly funded by the U.S. Department of Energy through the Center for Excitonics at MIT.

Just hanging on: Why mussels are so good at it