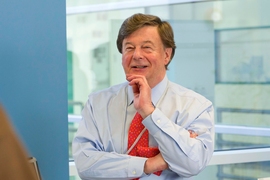 MIT Corporation life member and biotechnology pioneer Henri A. Termeer, who led the iconic Genzyme Corporation for nearly three decades, with a strong focus on combating rare diseases, died on Friday night at his home in Marblehead, Massachusetts. He was 71.

Widely regarded as a founder of Boston’s biotech industry, Termeer joined a fledgling Genzyme in the early 1980s, when the biotech industry itself was still in its infancy. Serving as Genzyme’s chairman, president, and CEO from 1983 until 2011, Termeer nurtured the company from a startup with fewer than 20 employees into one of the world’s largest biotech companies, employing more than 12,500 people worldwide.

At Genzyme, Termeer waged a therapeutic battle against rare genetic diseases that had few, if any, effective treatments available. Under his leadership, Genzyme developed a group of rare-disease medicines that have now reached thousands of patients — including the enzyme-replacement drugs Cerezyme for Gaucher disease and Fabrazyme for Fabry disease, as well as Lemtrada, a multiple sclerosis drug. Consequently, Termeer rose to prominence as an innovator of rare-disease drugs (called “orphan drugs”), which is fast becoming a lucrative market.

In 2011, Genzyme sold to French drug giant Sanofi SA for more than $20 billion — the second-largest acquisition deal in the history of the biotech industry, thanks largely to Termeer’s vision and business acumen.

“Henri Termeer was a gentleman — and a giant,” MIT President L. Rafael Reif says. “Brilliantly creative, wise, charming, gracious, and brave, he showed us all, in everything he did, how to live and how to lead. At Genzyme, by developing treatments for patients struggling with rare diseases, he built a thriving company, created thousands of jobs, and offered hope and health to countless individuals who otherwise had neither. In the process, he helped launch the biotechnology revolution in Greater Boston. And he built a parallel career as one of the region’s leading citizens, offering his insight and vision to help guide many of our most important institutions.”

“At MIT alone,” Reif continues, “he was a life member of the MIT Corporation and served on its Executive Committee; he chaired its Risk and Audit Committee; and he was crucial to shaping the Institute for Medical Engineering and Science. We will miss Henri terribly — as an advisor, an inspiration, and a friend. Our hearts go out to his wife, Belinda, to all the Termeers, and to the broader Genzyme family.”

“Henri was an extraordinarily wise man who gave MIT the wisdom of his experience, judgement, and perspective, such that the Institute could better serve its mission,” MIT Corporation Chair Robert B. Millard ’73 says. “He tangibly guided and amplified the work of MIT. He was one of the most respected and admired people we had the honor of knowing.”

Termeer’s impact on the local and global biotech industry was enormous. Scores of biotech leaders from around the world considered Termeer a mentor. In numerous articles published online about Termeer’s passing over the weekend, a number of those leaders mourned the loss of their former friend, praising Termeer as a mentor and biotech pioneer, and noting his magnetism and warmth as a business leader.

In a Boston Business Journal story, Josh Boger, founding CEO of Vertex Pharmaceuticals, called Termeer an “example for how to run a biotech firm” as a human- and community-centric organization: “I really was tutored by Henri Termeer about how [being a biotech CEO] is not just something that’s added to who you are. ... He was such a wonderful advocate for the patients, and an advocate for the industry he was a part of.”

Echoing that sentiment was David Meeker, now president of Sanofi Genzyme, in an article about Termeer in The Boston Globe. Termeer, Meeker told the Globe, was “the dean of the biotech community.” “His vision was to cure rare diseases, and he always had time to meet with the people dependent on our treatments,” he said. “He had the ability to forge such an intense relationship with everyone he met, and he made everyone in the industry feel like he cared about them as an individual.”

Many also attribute the rise of the Boston and Massachusetts biotech scene to Termeer’s work at Genzyme. In the Globe article, Bob Coughlin, president of the Massachusetts Biotechnology Council, called Termeer “a true visionary and an exemplary leader,” noting that Termeer and Genzyme had helped mold Massachusetts “into the best biotech hub in the world.”

After leaving Genzyme, Termeer stayed active in the biotech industry and never lost his love of launching and building companies. In 2011, Termeer and his wife, Belinda, donated $10 million to launch the Henri and Belinda Termeer Center for Targeted Therapies at Massachusetts General Hospital, where he served on the board of trustees. The center is designing a fast-growing pipeline of targeted treatments for rare tumors that have had few effective treatments.

Until his passing, Termeer also served on the boards of directors of several biotech companies, including X4 Pharmaceuticals, ProQR Therpeutics, and Lysosomal Therapeutics, all of which he co-founded, as well as Moderna Therapeutics, Verastem, Aveo Oncology, and others.

Termeer was also a board member for Partners Health Care, Harvard Medical School, Project HOPE, the Pharmaceutical Research and Manufacturers of America, and the Biotechnology Industry Organization, the world’s largest biotech trade association that he helped launch. Termeer also helped launch the Network for Excellence in Health Innovation, a Cambridge-based nonpartisan national health policy institute. From 2007 to 2011, Termeer served as a member of the board of the Federal Reserve Bank of Boston and as chairman from 2010 to 2011.

Born in the Netherlands in 1946, Termeer studied economics at the Economische Hogeschool, Erasmus University. In 1973, he earned his MBA at the Darden School of Business at the University of Virginia, and started working for Baxter International, a medical device company in Deerfield, Illinois, where he quickly climbed the ranks. From 1976 to 1979, he served as general manager for Travenol GmbH in Munich, Germany, and then as vice president of the Hyland Therapeutics division of Baxter Travenol in Glendale, California, from 1979 to 1981.

In 1983, Termeer was named president of a relatively unknown two-year-old biotech startup, Genzyme, located in Boston’s Chinatown, then called the “Combat Zone” — a former red-light district that Termeer had wryly described once as “the most romantic of neighborhoods.” Coincidentally, that year saw the passing of the Orphan Drug Act, a U.S. law that facilitated the development of drugs to treat rare diseases — such as Huntington’s Disease, amyotrophic lateral sclerosis, and muscular dystrophy — that then had limited treatment options.

In 1985, Termeer was appointed as Genzyme CEO and, in 1988, was named as chairman. By its 2011 acquisition, Genzyme, with Termeer at the helm, had become the third largest company of its kind, with more than 12,500 employees spanning more than 70 offices and plants worldwide. Much of the company’s value has been credited to Termeer’s leadership and focus on developing orphan drugs with unique biochemical designs to fight rare diseases. The National Organization for Rare Disorders estimates that 30 million Americans suffer from 7,000 rare diseases. In recent years, experts have projected that the steady-growing global orphan drug market will reach anywhere from $150 billion to $200 billion by 2020.

In a 2011 Boston.com article, Termeer fondly recalled his fateful first introduction to Genzyme nearly three decades prior — an unassuming company with infinite promise: “One day I got a call to visit whatever it was at Genzyme. And it was, of course, not much. It had the right ingredients. I liked that the direction hadn’t been really established. It was an open book. I could go where I wanted to go. I gave up my job, gave up half my income, and moved here. It was a shot in the dark, and it was magnificent.”

Termeer’s survivors include his wife, Belinda, and their daughter, Adriana, of Marblehead; his son, Nicholas, who lives in England; two sisters, Ineke of France and Marlies Verduijn of the Netherlands; and three brothers, Bert, Paul, Roel, all of the Netherlands.

A celebration of Termeer’s life will be held on Saturday, May 20, at 11 a.m. in Kresge Auditorium. Parking is available in the West Garage on Vassar Street.

Wall Street Journal reporter James Hagerty writes about the life and legacy of Henri Termeer, a life member of the MIT Corporation known for his work as a pioneering leader in the field of biotechnology.

Xconomy reporter Ben Fidler writes about the life and legacy of Henri Termeer, a life member of the MIT Corporation who died at age 71. Institute Prof. Phillip Sharp explains that Termeer was, “a transformational leader in biotechnology of orphan diseases. Many children now have hope of a healthy life because of his vision and 40 years of creative business leadership.”

Henri Termeer, a life member of the MIT Corporation who was known as one of the founding fathers of the biotech industry, died at age 71, write Robert Weisman and Bryan Marquard for The Boston Globe. Termeer was, “a key leader in the biotech revolution that placed Massachusetts at the nexus of cutting-edge research and development.”