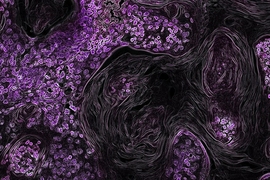 ↓ Download Image
Caption: In this image, lung cancer driven by the KRAS oncogene shows up in purple. MIT biologists have found a potential new way to treat this type of lung tumor, long thought to be “undruggable."
Credits: Image: National Cancer Institute / Huntsman Cancer Institute at the Univ. of Utah

Caption:
In this image, lung cancer driven by the KRAS oncogene shows up in purple. MIT biologists have found a potential new way to treat this type of lung tumor, long thought to be “undruggable."
Credits:
Image: National Cancer Institute / Huntsman Cancer Institute at the Univ. of Utah

Mutations in the KEAP1 gene could point the way to treating an aggressive form of lung cancer that is driven by “undruggable” mutations in the KRAS gene, according to a new study by MIT researchers.

KEAP1 mutations occur alongside KRAS mutations in about 17 percent of lung adenocarcinoma cases. Tyler Jacks, director of MIT’s Koch Institute for Integrative Cancer Research and co-senior author of the study, and his colleagues found that cancer cells with nonfunctioning KEAP1 genes are hungry for glutamine, an amino acid essential for protein synthesis and energy use. Starving these cells of glutamine may thus offer a way to treat cancers with both KRAS and KEAP1 mutations.

The study offers a way to identify lung cancer patients who might respond well to drugs that block the work of glutaminase, says MIT graduate student Rodrigo Romero, a first author on the paper that appears in the Oct. 2 online edition of Nature Medicine.

“All cell lines that we have currently tested that are KEAP1-mutant — independent of their KRAS status — appear to be exquisitely sensitive to glutaminase inhibitors,” says Romero, a graduate student in Jacks’ lab, who participated in the MIT Summer Research Program (MSRP) as an undergraduate.

Lung adenocarcinoma accounts for about 40 percent of U.S. lung cancers, and 15 to 30 percent of those cases contain a KRAS mutation. KRAS has been “notoriously difficult to inhibit” because the usual ways of blocking the KRAS protein’s interactions or interfering with the protein’s targets have fallen short, says Romero.

Lung cancers containing KRAS mutations often harbor other mutations, including KEAP1, which is the third most frequently mutated gene in lung adenocarcinoma. To find out more about how these co-mutations affect lung cancer progression, the MIT research team created KEAP1 mutations in mouse models of lung adenocarcinoma, using the CRISPR/Cas9 gene-editing system to target the gene.

The KEAP1 protein normally represses another protein called NRF2, which controls the activation of an antioxidant response that removes toxic, reactive oxygen species from cells. When the researchers disabled KEAP1 with loss-of-function mutations, NRF2 was able to accumulate and contribute to a “hyperactivation” of the antioxidant response.

In fact, when the researchers examined genes targeted by NRF2 across a sample of human lung adenocarcinoma tumors, they concluded that the expression of these genes was greater in advanced stage IV tumors, and that patients with such “up-regulated” NRF2 tumors had significantly worse survival rates than other lung adenocarcinoma patients.

Romero and colleagues used CRISPR/Cas9 to learn more about other genetic interactions with KEAP1 mutants. Their screening demonstrated that lung cancer cells with KRAS and KEAP1 loss-of function mutations were more dependent than other cells on increased amounts of glutamine.

To learn whether this glutamine hunger could be a therapeutic vulnerability, the researchers tested two glutaminase inhibitors against the cancer cells, including one compound called CB-839 that is in phase I clinical trials for KRAS-mutant lung cancer. CB-839 slowed growth and kept tumors smaller than normal in lung adenocarcinoma with KEAP1 mutations, the researchers found.

Phase I clinical trials that treat KEAP1-mutant lung adenocarcinoma patients with a combination of CB-839 and the cancer immunotherapy drug nivolumab (Opdivo) are also underway, says Romero, who notes the MIT study might help identify patients who would be good candidates for these trials.

“There are also many clinical trials testing the efficacy of glutaminase inhibition in a variety of cancer types, independent of KRAS status. However, the results from these studies are still unclear,” Romero says.

Jacks emphasizes that his laboratory has and will continue to study several mutations beyond KEAP1 that may cooperate with KRAS in their mouse models of human lung adenocarcinoma. “The complexity of human cancer can be quite daunting,” he notes. “The genetic tools that we have assembled allow us to create models of many individual subtypes of the disease and in this way begin to define the exploitable vulnerabilities of each. The observed sensitivity of KEAP1 mutant tumors to glutaminase inhibitors is an important example of this approach. There will be more.”

Co-authors on the Nature Medicine paper include former Koch Institute postdoc Thales Papagiannakopoulos, now at New York University, and MIT professor of biology Matthew Vander Heiden. The research was funded by the Laura and Isaac Perlmutter Cancer Support Grant, the National Institutes of Health, and the Koch Institute Support Grant from the National Cancer Institute.

Tyler Jacks: NIH budget cuts would have “devastating” effects on progress against cancer