Commercial space: Can we privatize our way to the stars? 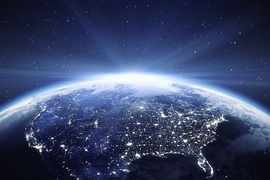 The new space race is on. Since the early 2000s, multiple private companies — such as SpaceX, Virgin Galactic, and Blue Origin — have been developing and deploying rockets and other technologies to enable space exploration, a sector historically controlled and funded by the federal government.

At this weekend’s New Space Age Conference, private space industry entrepreneurs and innovators descended on MIT’s campus to showcase their novel — and at times science-fiction-like — commercial ideas and innovations that could help humanity explore the stars and planets, and benefit people here on Earth.

Conference speakers enthusiastically highlighted how far the private space industry has come but also emphasized how far we’ve yet to go — with some ideas, such as asteroid mining or crewed Mars missions, still many years and billions of dollars away.

Still, with promise of reaching new horizons in space exploration, private space companies have seen an influx of funding in recent years, according to Barret Schlegelmilch, president of the student-run MIT Sloan Astropreneurship and Space Industry Club, which hosted the conference.

“The space industry as a whole is shifting to a place with a relatively low barrier for entry, where people with entrepreneurial ideas can make them happen in a completely new environment,” he told MIT News. “The conference is focused on bringing the leaders in their respective fields together and exploring what the next directions of the industry are.”

On Sunday, a separate but related conference at the MIT Media Lab, “Beyond the Cradle: Envisioning a New Space Age,” included a packed agenda of speakers — some who also spoke at Saturday’s conference — and workshops on virtual reality space experiences, designing space structures, and mission planning, among other topics.

Getting to the Red Planet

Colonizing Mars was, of course, a hot item on the agenda. A panel moderated by Aditya Bhattaru, a graduate student in MIT’s Department of Aeronautics and Astronautics (AeroAstro), focused on technologies and strategies to help private and federal ventures bring spacecraft, robots, and, ultimately, astronauts to the Red Planet.

The panelists — who included NASA and private industry representatives — agreed Mars exploration by humans is a few decades away and will cost hundreds of billions of dollars. Topics of discussion included: keeping crews entertained and mentally healthy with maintenance, games, and other activities on the months-long trip; challenges of high-costs launches and lack of economic initiatives for colonizing the Red Planet; and innovations in in situ resource utilization (ISRU), which means collecting resources from space to fuel rockets, create oxygen, and carry out other tasks.

Panelist Jeffrey Hoffman, a former NASA astronaut, professor of the practice in AeroAstro, and director of the MIT Man Vehicle Lab, discussed, among other things, the challenges of new astronaut training to colonize Mars, which will require broader skills than current space missions do.

“You’re going to need a greenhouse set up, you’re going to need people who understand farming and biology ... and [who can] keep the system running when you can’t just send up spare parts from the Earth in a few days,” Hoffman said. “And [they’ll need] the ability to adapt to local conditions and make use of things you didn’t plan to before. We need a lot of ‘MacGyvers’ up there.”

Hoffman is also deputy principal investigator on MOXIE, an instrument for the Mars 2020 rover mission that will recycle carbon dioxide in the planet’s atmosphere and spit out oxygen and propellant. Another AeroAstro professor, Kerri Cahoy, director of the MIT Space Telecommunications, Astronomy, and Radiation Lab (STAR Lab), spoke on a panel about innovations in space-based communications.

Some ventures presented at the meeting seemed far-fetched but could, in a few years’ time, be a commercial reality, including efforts to offer brief space flights to the public.

“Who in this room would go [to space] given the chance?” MIT alumna Erika Wagner SM '02, PhD '07, business development manager at space-tourism company Blue Origin, asked during her presentation, provoking a crowd of raised hands.

Founded by Amazon founder Jeff Bezos in 2000, Blue Origin is developing a 60-foot-tall shuttle with a detachable capsule that can bring humans to space with minimal training. When the shuttle reaches orbit, the six-person capsule detaches for roughly four minutes before drifting back down to Earth via parachute and rocket boosters — about an 11-minute journey total. Acceleration is no worse than riding a roller coaster, and everything is controlled remotely from Earth.

Blue Origin is planning its first human flight, with trained astronauts, for within a year. But now, the company is successfully launching various payloads — such as imaging and research technologies — for paying companies and organizations. Offering a word of advice to startups, Wagner said delivering payloads “is one of the fastest and most affordable ways to get something into space to prove your technology, to attract investors.”

Startup advice was in no short supply. Natalya Bailey PhD ’15, co-founder and CEO of Accion Systems, which develops novel propulsion devices for microsatellites, talked about transitioning from the lab to market. Presentations also came from LightSpeed Innovations, a California-based aerospace startup accelerator, and from Sembler, a project from engineering firm (and MIT spinout) Draper that provides space startups with resources to cut costs of hardware development and testing. Matthew Kleiman, an expert in the niche field of space law, offered remarks about regulatory frameworks surrounding space operations.

“It’s really encouraging to see how much venture capital and accelerators are investing in new technologies … [and] to see the industry shifting to new companies and technologies,” said Michael Provenzano, a student at Carnegie Melon Tepper School of Business, who is building a space entrepreneurship club at his school.

One of the more ambitious business concepts came from James Orsulak, director of sales and business development at space-mining company Planetary Resources. He spoke about business opportunities in the “industrial space revolution,” which could bring about the development of moon bases, orbital space hotels, and methods for mining asteroids for resources — a concept popularized by the 1998 film “Armageddon.”

“Some will say it’s science fiction,” but it’s more realistic than people think, he said. Space services, such as orbital refueling depots and resource extraction, is a market now pegged at around $30 billion, he said, with countries such as Luxembourg recently investing hundreds of millions of dollars in space mining.

Currently, Planetary Resources is developing an advanced, satellite-based imaging system that can determine the exact composition of asteroids and parts of Earth. In the future, the company aims to create a system to extract water from asteroids, refine it into liquid hydrogen rocket propellant, and deliver it to (currently hypothetical) refueling depots. Then, it hopes to extract precious metals, such as platinum, for orbital manufacturing. “We want to help get people thinking about what happens when you stop thinking all resources have to come from this planet,” Orsulak said. But the space infrastructure may take decades to build.

While some ventures turned to the stars, others used space-age technology to help people on Earth. The Mars panel included a representative from RedWorks, which initially

developed technology to make building materials from dirt on Mars, but now is focusing on building low-cost homes on Earth.

In her presentation, MIT alumna Katerina Lengold MBA ’14, who founded satellite-imaging startup ImageAiry and now serves as vice president of business development for Astro Digital (which acquired her startup), discussed how her company uses small satellites — about the size of a shoebox — to image of any part of Earth with high precision for agriculture applications, forest and disaster monitoring, and urban development, among other uses.

“But pictures are just the first step. What we want is prediction,” Lengold said. The company, for instance, used data analytics to monitor corn yields in Iowa in real time and predict optimal planting windows based on combining weather data with their precise satellite measurements.

“It’s not rocket science,” Lengold said, to laughs from the crowd. “But it’s very powerful to predict things, to say what the yield is going to look like, what you should do and shouldn’t do on the field … so you have to produce data with very [high] quality.”

Rei Yamamoto, a representative from Tokyo-based space-entertainment startup Ale, flew in to attend Saturday’s conference and speak at Sunday’s. Ale is developing “Sky Canvas,” a project that aims to artificially recreate shooting stars and meteor showers for events. It plans to launch a satellite with 500 to 1,000 custom particles into orbit. Those particles are remotely discharged on demand and burn up upon reentry to Earth’s atmosphere.

For Yamamoto, the conference offered opportunities to network and stay abreast of innovations in America’s private space industry, which is vastly different from Japan’s. “Being able to sit in a room with all these folks and hear the latest trends was helpful,” she said. “What struck me the most was the amount of resources available from different programs for startups. We’re not there yet in Tokyo, but we hope to be soon.”

In an article for CBS News, Tracy Staedter spotlights a panel discussion focused on the challenges of exploring and potentially colonizing Mars, which was held during the New Space Age Conference at MIT.