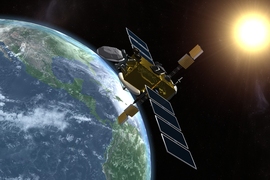 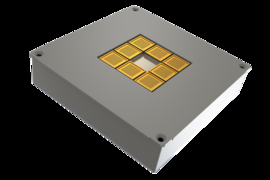 ↓ Download Image
Caption: Accion's first product, MAX-1 (shown here), is a module comprising eight chips — each about 1 square centimeter, and 2 millimeters thick — that can be applied anywhere on a CubeSat to help it maneuver and compensate for atmospheric drag.
Credits: Courtesy of Accion Systems

Caption:
Accion's first product, MAX-1 (shown here), is a module comprising eight chips — each about 1 square centimeter, and 2 millimeters thick — that can be applied anywhere on a CubeSat to help it maneuver and compensate for atmospheric drag.
Credits:
Courtesy of Accion Systems

Small satellites are becoming increasingly popular tools for Earth-imaging, communications, and other applications. But they have major control issues: Once in space, they can’t accurately point cameras or change orbit, and they usually crash and burn within a few months.

What these satellites lack is a viable propulsion system, says MIT aeronautics and astronautics alumna Natalya Brikner PhD ’15, co-founder and CEO of Accion Systems. “You can make a satellite the size of a softball with a surprising amount of capabilities, but it can’t maneuver properly and falls from orbit quickly,” she says. “People are waiting for a solution.”

Now Accion has developed a commercial electrospray propulsion system — their first is about the size of a pack of gum — made of tiny chips that provide thrust for small satellites. Among other advantages, Accion’s module can be manufactured for significantly less than today’s alternatives.

This technology could enable low-cost satellites, such as those known as “CubeSats,” to become more viable for various commercial and research applications, including advanced imaging and communications, where numerous satellites could provide global coverage. “That requires propulsion, but something so small that it won’t interfere with the small volume and resources a small satellite already has,” says Accion technical advisor Paulo Lozano, an associate professor of aeronautics and astronautics who invented the underlying technology.

Ultimately, he adds, the technology could give small startups — and even countries without well-funded space programs — the opportunity to use low-cost satellites for space exploration. “It’s what other people have called the ‘democratization of space,’” Lozano says. “I think this will contribute to making that a reality.”

The other Accion co-founder is Louis Perna ’09, SM ’14, who co-invented the system and now leads product development.

Accion’s first commercial system is MAX-1, a module comprising eight chips — each about 1 square centimeter, and 2 millimeters thick — that can be applied anywhere on a satellite. On Earth, it provides enough thrust to “move around a sheet of paper,” Brikner says. But in space, it can push around a CubeSat, or a slightly larger satellite.

The module has a plastic tank that stores a nontoxic, nonvolatile, liquid-salt propellant. Above the reservoir are the chips, which each have a porous substrate with about 500 pointed tips and, above that, an extractor grid with small holes. (Capillary forces cause the propellant to flow from the reservoir to the substrate tips.)

When a high voltage is applied between the tips and grid, charged ions burst through the holes. “When you extract and accelerate these ions, that momentum exchange propels the spacecraft in the opposite direction,” Brikner explains.

Accion is on target to launch MAX-1 in July, and plans to start shipping the system to customers by the end of the year.

Because the module doesn’t have pressurized tanks, bulky valves, or neutralizing cathodes, it has a higher thrust-to-mass ratio than low-power, plasma-based ion engines — meaning it packs a punch. In January, Accion tested a miniature version of MAX-1, called MIN-0, inside a vacuum chamber at MIT. The team measured the emitted current of the released ions after applying certain levels of voltage. From that experiment, and others, they conclude the MAX-1 can provide about 100 micronewtons of force per square meter.

This is enough thrust, for example, to stabilize a CubeSat launched from the International Space Station, and to compensate for atmospheric drag, “which is the force that pulls [small satellites] into the atmosphere prematurely, where they burn up,” Brikner says.

However, with dozens of small satellites being launched annually, Lozano adds, the system could also help control how long they stay in space, so they don’t become floating space junk. “You can climb to an orbit where drag is less, and stay there for longer, and use the same propulsion system to re-enter [the atmosphere],” he says.

While it is possible to create low-cost chemical-propulsion systems, it’s not practical, Brikner says. Chemical systems are made with explosive pressurized tanks, which are not allowed to piggyback on the larger rockets that carry small satellites into space. “So they’re easy to produce, but no one’s allowed to use them,” Brikner says.

Electric-propulsion systems are, therefore, safer and more popular alternatives. But these are expensive to make, as they use the rare gas xenon as a propellant, which also needs pressurization for storage. Accion’s propellant is a liquid salt material, similar in structure to common table salt, which can be made in large quantities.

With that novel propellant, and a simple design, Accion can batch-manufacture modules — much like computer chips — in quantities of around 200 at once. According to Brikner, this costs about one-tenth as much as other electric-propulsion systems. “We don’t want them to be made like bespoke jewelry anymore,” she says.

Accion launched in 2012, when Brikner and Perna came to the Space Propulsion Laboratory, which Lozano directs. At the time, Lozano was prototyping an electric-propulsion system — the precursor of the Accion technology — that he’d been working on at MIT since around 2004.

Industry had already caught wind of the technology: “I remember right away hearing about people wanting to buy or license the technology,” Perna says. Within months, “an opportunity came to start a company.”

For Perna, this was a first startup experience. But for Brikner, it was a second chance: In 2009, she’d launched Asteria Micropropulsion, a startup that aimed to make chemical-based launchers for small satellites. It closed soon after it started. “I never thought I’d have another chance to do a space-propulsion company,” Brikner says. “Then when the opportunity came up I said, ‘I have another shot at this? This is incredible.’”

So which of MIT’s entrepreneurial resources did the team use to launch Accion? “I think we used all of them,” Brikner says, laughing.

Entrepreneurs at the Venture Mentoring Service, for instance, advised the team on building a business plan and obtaining funding. Entrepreneurs-in-residence at the Martin Trust Center for MIT Entrepreneurship helped them work through mistakes they’d made regarding legal support, funding, and operations. “We had a lot of holes to dig out of, and they were helpful,” Brikner says.

In 2014, Accion entered the Global Founders Skills Accelerator (GFSA), a summer incubator in the Trust Center, where they spent a majority of their time tailoring the technology to the customer based on consistent feedback. This became valuable in orienting the technology toward customer needs. “We were shocked by how valuable that was,” Brikner says, adding, “It’s something we haven’t stopped doing.”

GFSA helped shift Perna’s focus from a strict technological mindset to the foreign concepts of business planning, customer service, and management. “The program was extremely helpful in connecting people who had essentially zero background in [entrepreneurship] with basic concepts, and helping you frame what you’re doing with your company in those concepts,” he says.

Accion is now headquartered at Greentown Labs in Somerville, Massachusetts, where it continues tweaking its technology, while prepping for its upcoming launches.

In the future, Lozano says Accion’s system could enable small satellites to perform tasks now possible only for much larger satellites — such as exploring the moon. Small satellites aren’t yet able to reach the appropriate orbit for such missions. “But if you’re stuck in an orbit you don’t want, you can use propulsion to get to these interesting places,” he says. “I think that’s a game-changer.”

In an article for New Scientist, Lisa Grossman writes that Prof. Paulo Lozano is developing a miniature propulsion system for steering CubeSats, a type of tiny satellite, around in space. “We want to offer space access to people who don’t currently have space access,” explains Lozano.

Jon Christian of The Boston Globe reports that MIT startup Accion Systems has developed a thruster technology that will allow satellites to adjust their orbits. “Eventually, we hope to be able to scale up the performance to address the really large, school bus-size satellites,” explains Accion co-founder and MIT alumna Natalya Brikner.