It’s hard to miss the rocket engine in Paulo Lozano’s MIT office. The 100-lb. propulsion system — about as big as a car’s tire and built almost entirely of stainless steel — sits in a large glass showcase. The engine is the type of bulky hardware that powers many of today’s spacecraft to the moon, planets and far-off asteroids like Ceres and Vesta.

In contrast, it’s relatively easy to overlook a very small package that sits amid some clutter on Lozano’s desk. Though unassuming at first glance, the device — the size and weight of a Lego brick — may be the future of space propulsion, one day taking the place of bulkier, more expensive rocket engines.

Lozano, an associate professor of aeronautics and astronautics at MIT, is designing tiny ion thrusters to cheaply and efficiently propel shoebox-sized satellites, known as “CubeSats,” through space. The thrusters, which can run on solar power, contain a small amount of liquid propellant that, when electrified, creates a stream of ions that are released from microscale nozzles as puffs of charged gas — generating a thrust that can propel a small satellite forward. 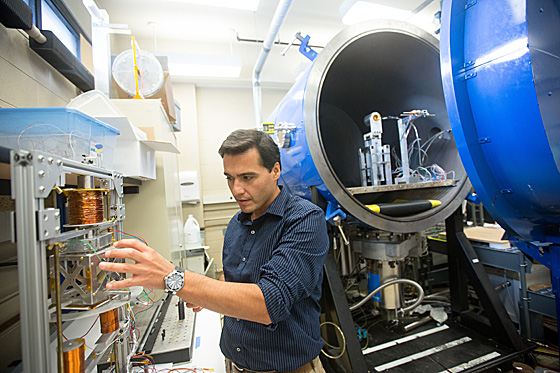 Currently, once launched into a low orbit around Earth, CubeSats are “left tumbling in space,” as Lozano describes it, drifting along with the natural pull of the planet’s orbit until the satellite burns up in the atmosphere. While propulsion systems would enable such tiny probes to travel further into space, conventional combustion-based systems are too bulky to fit onboard a CubeSat.

By contrast, Lozano’s ion thrusters — even if combined in an array — would take up minimal power and real estate, providing an efficient and low-cost option for exploring the solar system.

“The goal is to make [CubeSats] do most of the things we already do with big satellites, except in a less expensive way,” Lozano says. “People have very big plans for these very small spacecraft.”

Growing up in Mexico City, Lozano never missed an episode of Carl Sagan’s “Cosmos: A Personal Voyage,” a television series that inspired a lifelong interest in space exploration. When his father came home with a telescope for Lozano, it was “an eye-opener”: The young space enthusiast quickly learned to train the scope on distant stars, and on his favorite planet, Jupiter.

“It’s such a massive planet that rotates every 10 hours, and when you see little dots around Jupiter, which are its moons, you cannot believe you have in front of you some sort of solar system in miniature,” Lozano says. “And you say to yourself, ‘This is out of this world, literally.’”

Unlike most kids in his neighborhood, Lozano chose to spend much of his free time not on the playground or the soccer fields, but in a bookstore. At the time, there were few public libraries in the city, and his mother would bring him to a local bookstore, where he recalls, “It was so difficult for her to get me out — it was like my playground.”

He remembers reading up on a wide range of subjects, and soon became engrossed in the science of flight. Airplanes were of particular interest to Lozano, who remembers trying to build a cardboard replica as a boy.

“I had an old motorcycle, and my dream was to remove the engine and put it together in some sort of structure,” Lozano says. “But I knew nothing of aerodynamics, and it never flew.”

Casting this minor hurdle aside, Lozano continued to learn about aerospace and other fields of science. His persistent curiosity paid off, and he eventually received bachelor’s and master’s degrees in physics engineering from ITESM and CINVESTAV, engineering universities in Mexico.

‘The heart of every system’

To continue his studies, Lozano looked to MIT, and was soon accepted as a graduate student in the Department of Aeronautics and Astronautics. There, he discovered a subject that melded his interests in physics and aerospace: propulsion.

“There are so many exciting areas in aerospace, but propulsion was for me the heart of every system — the heart of the plane, the engine, the spacecraft and rocket,” Lozano says. “It was natural for me to gravitate toward propulsion.”

Soon after settling in at MIT, Lozano joined the Space Power and Propulsion Laboratory, led by professors Daniel Hastings and Manuel Martinez-Sanchez. The lab, now the Space Propulsion Laboratory, was in the midst of transition: Since its founding in the 1980s, it had mostly produced theoretical work, generating very few experiments. Lozano helped transform the lab into a hardware facility, installing its first vacuum chamber in which to test new thruster designs.

Specifically, Martinez-Sanchez envisioned the lab as a testing ground for miniaturized thrusters, just powerful enough to propel small satellites in space. At the time, the aerospace community was starting to consider the potential of small satellites, but talk of small-scale propulsion systems was still premature.

“The original plan for miniaturizing electric propulsion was just taking one of these big engines and making it smaller,” Lozano says. “But the physics doesn’t work that way — that’s the problem.”

So the team tried new approaches, testing miniature plasma thrusters, colloid thrusters and, finally, ion electrospray thrusters, which worked theoretically, experimentally and at a microscale. Lozano, who took over this year as director of the Space Propulsion Laboratory, has since focused his work on improving the ion electrospray thruster design, and hopes to launch an array of thrusters on a CubeSat mission within the next year.

If successful, Lozano says, the thrusters could steer a spacecraft in space for months at a time at a fraction of a conventional mission’s budget.

“The price tag of exploration missions is too high,” Lozano says. “But imagine what would happen if you had these very small platforms. Instead of launching one, you could launch 20 for the same price. And you could do as exciting science as you could with the big ones, like go to Europa [a moon of Jupiter]. Why not? The sky is the limit.”