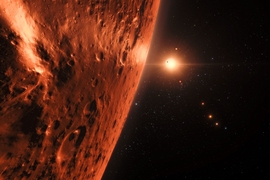 ↓ Download Image
Caption: This artist’s impression shows the view from the surface of one of the planets in the TRAPPIST-1 system. At least seven planets orbit this ultracool dwarf star 40 light-years from Earth and they are all roughly the same size as the Earth. Several of the planets are at the right distances from their star for liquid water to exist on the surfaces.

Caption:
This artist’s impression shows the view from the surface of one of the planets in the TRAPPIST-1 system. At least seven planets orbit this ultracool dwarf star 40 light-years from Earth and they are all roughly the same size as the Earth. Several of the planets are at the right distances from their star for liquid water to exist on the surfaces.

Seven Earth-sized exoplanets circle the ultracool dwarf star TRAPPIST-1, just 40 light-years from our own blue planet. Now an international team of scientists at the Geneva Observatory in Switzerland, MIT, and elsewhere, report that the outer planets in this system may still hold significant stores of water. Three of these potential water worlds are also considered within the habitable zone of the star, giving further support to the possibility that these neighboring planets may, in fact, be hospitable to life.

The team’s results, published today in The Astronomical Journal, are based on observations of the TRAPPIST-1 star made by the NASA/ESA Hubble Space Telescope. The researchers trained the telescope on the star to measure its current ultraviolet radiation, and used these measurements to estimate how the star’s energy changed over the course of billions of years. They then modeled how the star’s energy may have affected the water resources on each of the TRAPPIST-1 exoplanets over the last 8 billion years.

Scientists’ current knowledge of the system suggests that these planets originally formed much farther out from their star, in a cold zone populated with crystals of water ice, which the planets likely captured as they came together, potentially creating tremendous stores of water, both in the planets’ interiors and on their surfaces.

From their observations and modeling, the researchers conclude that, over the past 8 billion years, heat and radiation from the star may have caused the innermost planets to lose more than 20 times the amount of water in all of Earth’s oceans. Meanwhile, they say, the outer planets would have lost much less, suggesting they could still retain some water on their surfaces and in their interiors.

“In terms of habitability, this is a positive step forward to say that hopes are still high,” says study co-author Julien de Wit, a postdoc in MIT’s Department of Earth, Atmospheric and Planetary Sciences. “This concludes that a few of these outer planets could have been able to hold onto some water, if they accumulated enough during their formation. But we need to gather more information and actually see a hint of water, which we haven’t found yet.”

Since then, de Wit, lead author Vincent Bourrier of the Geneva Observatory,

and an international team of researchers used the Hubble Space Telescope Imaging Spectrograph (STIS) to measure the amount of ultraviolet radiation given off by the TRAPPIST-1 star then received by its planets. If a planet’s atmosphere harbors water vapor, the presence of ultraviolet radiation can act to break up that water vapor, into oxygen and hydrogen — a process that occurs today on Earth. As oxygen is heavier than hydrogen, it sinks towards the surface, while hydrogen rises through the upper atmosphere.

The researchers hoped that by using Hubble’s imaging spectrograph, they might look for signs of hydrogen, particularly around two of the middle planets. The researchers were focused on a very narrow region of the ultraviolet spectrum, called the Lyman-alpha band, which is sensitive to hydrogen. They reasoned that if they picked up traces of hydrogen around either planet, that would suggest the presence of water vapor.

In 2016, the team trained the telescope on the TRAPPIST-1 system over one observing run of five orbits for each planet, totaling eight hours, in which they gathered 4.5 hours of data. Unfortunately, the observations of whether each planet contained hydrogen, and therefore water vapor, were inconclusive.

However, the researchers also obtained measurements of the star’s ultraviolet flux, or the strength of its radiation. They compared these measurements to similar ones made the previous year.

“We see this flux is actually changing, and we can use this change to backtrack and have an understanding of how much energy the star is putting on each planet over the course of the planets’ lives,” de Wit explains.

Based on previous estimates of the planets’ densities, the scientists assume that the planets likely formed much farther out from their current positions, beyond what is considered the “ice line” — the distance from the star, beyond which space is cold enough for ice crystals to spontaneously form. It’s likely that all seven TRAPPIST-1 planets took shape within this zone, taking up significant volumes of water ice as they formed.

Researchers have also previously observed that the planets’ orbital configurations are such that they likely migrated together, “moving as a pack,” as de Wit describes, eventually taking up their current positions, closer into their star. As they migrated into the star’s warmer zone, the star’s ultraviolet radiation likely started to strip away and evaporate the planets’ water resources.

In their current paper, the scientists used their estimates of the star’s ultraviolet flux over the last 8 billion years to estimate the amount of water the the planets likely lost as they migrated over this period of time, closer in to their star.

The team plugged the estimates of ultraviolet flux into two separate models: an atmospheric model that calculates the amount of water vapor that might be lost given a certain ultraviolet concentration, and a geophysical model that estimates how much water ice and other volatiles, buried deep in a planet’s interior, can be brought back up into the atmosphere via outgassing.

From their modeling, the scientists estimate that the innermost planets lost more than 20 times Earth’s current oceanic water stores over their 8-billion-year journey toward their star, while the outermost planets lost much less, equivalent to around three times the ocean stores on Earth.

“Earth-sized planets can capture hundreds of Earth-oceans’ worth of water when they form, but it’s highly dependent on so many factors, and difficult to say,” de Wit says. “We can say the inner ones probably lost a huge amount of water, and the outer ones way less, allowing them to actually still have some water, if they captured it when they first formed.”

“It depends a lot on their initial water content,” Bourrier adds. “If they formed as ocean planets, even the inner ones would likely still harbor a lot of water. We are still a long way to determining the habitability of these planets, but our results suggest that the outer ones might be the best targets to focus our future observations.”

De Wit and his colleagues are planning another observing run, and will use Hubble to monitor the system more closely, spending more time observing, and trying to look for clouds of hydrogen around each planet as they transit, or cross in front of their star.

“If the planet’s atmosphere holds water vapor, and it is losing hydrogen as it reacts with ultraviolet radiation, it will look a bit like a gigantic comet with a tail, or a sphere that’s 10 times bigger than the planet, filled with atomic hydrogen, that is slowly flowing out of the planet, forming a tail from the stellar wind,” de Wit says. “It’s amazing how quickly our perspective on this [system] has changed. It’s really a steep learning curve that is really exciting.”

This research was supported, in part, by NASA, the Space Science Telescope Institute, the Swiss National Science Foundation, the Simons Foundation, the Belgian National Fund for Scientific Research, and the Gruber Foundation.

3Q: Julien de Wit on the discovery of seven temperate, nearby worlds