3Q: Julien de Wit on the discovery of seven temperate, nearby worlds 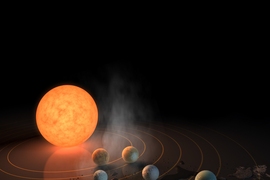 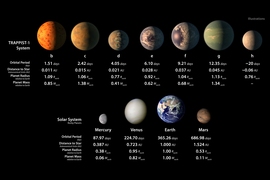 ↓ Download Image
Caption: This chart shows, on the top row, artist conceptions of the seven planets of TRAPPIST-1 with their orbital periods, distances from their star, radii, and masses, as compared to those of Earth. The bottom row shows data about Mercury, Venus, Earth, and Mars.

Caption:
This chart shows, on the top row, artist conceptions of the seven planets of TRAPPIST-1 with their orbital periods, distances from their star, radii, and masses, as compared to those of Earth. The bottom row shows data about Mercury, Venus, Earth, and Mars.
Credits:
Image: NASA/JPL-Caltech

Today, an international team including astronomers from MIT and the University of Liège in Belgium has announced the discovery of seven Earth-sized planets orbiting a nearby star just 39 light years from Earth. All seven planets appear to be rocky, and any one of them may harbor liquid water, as they are each within an area called the habitable zone, where temperatures are within a range suitable for sustaining liquid water on a planet’s surface.

The discovery marks a new record, as the planets make up the largest known number of habitable-zone planets orbiting a single star outside our solar system. The results are published today in the journal Nature.

Julien de Wit, a postdoc in the Department of Earth, Atmospheric, and Planetary Sciences, is heading up the team’s study of the planets’ atmospheres, the compositions of which may offer up essential clues as to whether these planets harbor signs of life. De Wit and principal investigator Michael Gillon of the University of Liège will be presenting the group’s results in a talk at MIT on February 24.

MIT News spoke with de Wit about the solar system’s new terrestrial neighbors and the possibility for life beyond our planet.

Q: What can you tell us so far about these seven planets?

A: These planets are the first found beyond the edge of our solar system, with the winning combination of being Earth-sized, temperate, and well-suited for imminent atmospheric studies. Temperate means that they can possibly harbor liquid water at their surface, while well-suited for atmospheric studies means that owing to the star they orbit and how close to the Earth it is, we will be able to get exquisite insights into their atmospheres within the next decade.

The planets are tightly packed around a small, cool, red dim star called TRAPPIST-1, located just 39 light years from Earth. TRAPPIST-1 is an ultracool dwarf star, estimated to be about 2,550 kelvins, versus our sun, which boils at around 5,800 kelvins.

The planets are so tightly packed that the seven of them are found within a distance of TRAPPIST-1 that is five times smaller than the distance from the sun to Mercury. This is so close that, depending on the planet, a year would last between 1.5 and 20 days. These planets are also most likely tidally locked, meaning that they always show the same hemisphere to their star, like the Moon does to the Earth, implying that the star never rises or sets, but stays fixed in the sky.

The small size of the star (about 11 percent the radius of the sun) is an essential part of the interest of this system. The planets were detected using the transit technique, which searches for a flux drop in a star’s brightness when a planet passes in front of it. As the flux drop is directly related to the planet-to-star area ratio, the smaller the star, the easier the detection of a planet. The signal of TRAPPIST-1’s planets is for instance about 80 times larger than what it would be if they were orbiting a star like our sun.

All of these planets are the best targets found so far to search for signs of life, and it is remarkable that they are all transiting the same star. This means that the system will allow us to study each planet in great depth, providing for the first time a rich perspective on a different planetary system than ours, and on planets around the smallest main sequence stars.

We have initiated a worldwide reconnaissance effort that spans the electromagnetic spectrum from the UV to radio, to study this system in more depth. Here at MIT, and with a large group of international experts around the world, graduate student Mary Knapp is co-leading the search for signs of planetary magnetic fields in radio, while I am leading the atmospheric reconnaissance with the Hubble Space Telescope. With observations of this system taken by Hubble last May, we have already ruled out the presence of puffy, hydrogen-dominated atmospheres around the two innermost planets, which means that they are not “mini-Neptunes” that would be uninhabitable, but are terrestrial like Mercury, Venus, Earth, and Mars. We are currently processing observations of the new planets and should gain new insights soon.

Q:  Take us back to the moment of discovery. What tipped you all off that all of these planets might actually be terrestrial, and possibly even Earth-like?

A: It was such an incredible day. On Sept. 19, 2016, NASA’s Spitzer Space Telescope had started its 20-day-long monitoring of TRAPPIST-1 to search for flux drops. On Oct. 6, the first part of the data corresponding to the first 10 days of observation were released on NASA’s secured servers. Now, the fun fact is that on that day, Michael Gillon was stationed in Morocco, with a very bad internet connection, and couldn’t start playing with the data. Fortunately for his nerves, four other researchers (Jim Ingalls, Brice-Olivier Demory, Sean Carey, and I) could access the data. When I downloaded it and performed a quick processing, we had a pure, jaw-dropping, “never-seen-before” moment: By eye, I could count five more transits than expected over a short 10-day window — simply insane. After a quick iteration with Michael, we thought then that the system was containing three more planets, one being a super-Earth. But we realized quickly that what appeared to be a super-Earth was actually two planets transiting at the same time.

Our verdict: four more planets, all Earth-sized. When the second half of the data arrived on Oct. 27, we all gathered online for a debrief and cheers (with Trappist beers!). It was such an exhilarating moment.

Q: What are the chances that there may be life on one or more of these planets, and what will it take to find out?

A: We have literally no idea, but we have a chance of figuring that out soon! So far, we know that the planets could be great candidates, as they have the size of the Earth and are temperate. We now need to determine their surface conditions. This requires (1) obtaining a tight constraint on their masses, (2) assessing the type of atmospheres they have, (3) determining if they (may) actually harbor surface liquid water, and (4) searching for signs of life (i.e., biosignatures). What this will take is a significant multidisciplinary effort over the next 20 to 25 years.

When planets are close together and their orbits are in a certain spacing, they interact with each other through gravity, causing the timing of their transits to change a little as the planets tug on each other. By measuring this change, we can determine the mass of the planets. By knowing precisely the size and mass of the planets, we can determine their bulk density, and geophysicists can then help us better understand their interiors.

We will also assess their atmosphere types with a scaled-up version of our reconnaissance programs. Over the next two years, we are hoping to leverage Hubble’s capabilities to search for the presence of water- or methane-dominated atmospheres.

In the future, upcoming observatories like the James Webb Space Telescope will help us constrain the planets’ atmospheric composition, temperature, and pressure profiles — all essential information for determining the surface conditions possible over their globes.

It is important to point out here that obtaining these constraints will only be possible if we have a complete and unbiased understanding of how the light of the star going through the planet atmospheres is affected by the different components as a function of the temperature, pressure, and other gases. Then and only then, will we be able to assess the habitability of the planet.

A key part in searching for signs of life on these planets will be to determine what exactly is a sign of life, or biosignature. This is where the insight of biochemists will be essential. Fortunately, here at MIT we are already tackling this question. Indeed, Professor Sara Seager, together with postdoc Janusz Petkowski and William Bains at Cambridge University, are currently investigating the chemical space that life can occupy, to create a list of biosignatures which we will use in the future to determine if the gases detected are indicative of the presence of life on these planets.

Los Angeles Times writer Amina Khan examines the planets that surround dwarf star TRAPPIST-1 – highlighting that most planets near earth’s size are likely to be rocky. “It will be really fascinating when we get to dive into the atmosphere of each of these planets and see how different or similar they are," said postdoc Julien de Wit.

Prof. Sara Seager speaks with WGBH’s Edgar Herwick about the search for life on other planets, following the discovery of seven Earth-sized exoplanets. "The first thing we’re gonna look for is water vapor in the atmosphere," Seager explains. “If there’s water, we want to look and see if there are gasses that don’t belong that might be produced by life."

Postdoc Julien de Wit speaks with Boston Herald reporter Marie Szaniszlo about the discovery of seven Earth-like planets. De Wit, who is leading the effort to study the planets’ atmospheres, explains that “this is the first time that we’ve found so many small planets — each potentially habitable — around the same star, a star that’s close to us.”

Postdoc Julien de Wit speaks with NPR reporter Nell Greenfieldboyce about the discovery of seven exoplanets that could harbor the conditions necessary to sustain liquid water. Greenfieldboyce reports that de Wit explained that the planets have a “‘winning combination’ of being temperate, Earth-size and ideally suited for follow-up observations with telescopes to analyze their atmospheres.”

An international team of scientists, including astronomers from MIT, has discovered seven Earth-sized planets, reports Sarah Kaplan for The Washington Post. Julien de Wit, a postdoc at MIT who is leading the study of the planets’ atmospheres, explains that repeated observations of the planets, “lifted the veil on the architecture of the system.”

New York Times reporter Kenneth Chang writes about the discovery of seven Earth-sized exoplanets by a team of researchers, including MIT scientists. The discovery makes “the search for life in the galaxy imminent,” says Prof. Sara Seager. “We just have to wait and then make very careful observations and see what is in the atmospheres of the Trappist planets.”