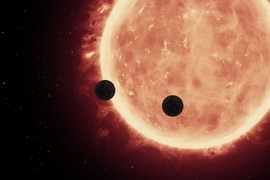 Caption:
An artist’s depiction of planets transiting a red dwarf star in the TRAPPIST-1 System
Credits:
Courtesy of NASA/ESA/STScl

On May 2, scientists from MIT, the University of Liège, and elsewhere announced they had discovered a planetary system, a mere 40 light years from Earth, that hosts three potentially habitable, Earth-sized worlds. Judging from the size and temperature of the planets, the researchers determined that regions of each planet may be suitable for life.

Now, in a paper published today in Nature, that same group reports that the two innermost planets in the system are primarily rocky, unlike gas giants such as Jupiter. The findings further strengthen the case that these planets may indeed be habitable. The researchers also determined that the atmospheres of both planets are likely not large and diffuse, like that of the Jupiter, but instead compact, similar to the atmospheres of Earth, Venus, and Mars.

The scientists, led by first author Julien de Wit, a postdoc in MIT’s Department of Earth, Atmospheric and Planetary Sciences, came to their conclusion after making a preliminary screening of the planets’ atmospheres, just days after announcing the discovery of the planetary system.

On May 4, the team pointed NASA’s Hubble Space Telescope at the system’s star, TRAPPIST-1, to catch a rare event: a double transit, the moment when two planets almost simultaneously pass in front of their star. The researchers realized the planets would transit just two weeks before the event, thanks to refined estimates of the planets’ orbital configuration, made by NASA’s Spitzer Space Telescope, which had already started to observe the TRAPPIST-1 system.

“We thought, maybe we could see if people at Hubble would give us time to do this observation, so we wrote the proposal in less than 24 hours, sent it out, and it was reviewed immediately,” de Wit recalls. “Now for the first time we have spectroscopic observations of a double transit, which allows us to get insight on the atmosphere of both planets at the same time.”

Using Hubble, the team recorded a combined transmission spectrum of TRAPPIST-1b and c, meaning that as first one planet then the other crossed in front of the star, they were able to measure the changes in wavelength as the amount of starlight dipped with each transit.

“The data turned out to be pristine, absolutely perfect, and the observations were the best that we could have expected,” de Wit says. “The force was certainly with us.”

The dips in starlight were observed over a narrow range of wavelengths that turned out not to vary much over that range. If the dips had varied significantly, de Wit says, such a signal would have demonstrated the planets have light, large, and puffy atmospheres, similar to that of the gas giant Jupiter.

But that’s not the case. Instead, the data suggest that both transiting planets have more compact atmospheres, similar to those of rocky planets such as Earth, Venus, and Mars.

“A rocky surface is a great start for a habitable planet, but any life on the TRAPPIST-1 planets is likely to have a much harder time than life on Earth,” says Joanna Barstow, an astrophysicist at University College London, who was not involved with the research.

As the planets orbit very close to their star, Barstow says that may mean the radiation coming off the star may strip their atmospheres away entirely, making it extremely difficult for organisms to thrive, particularly as both planets are tidally locked, meaning they have permanent day and night sides.

“Of course, our ideas of habitability are very narrow because we only have one planet to look at so far, and life might well surprise us by flourishing in what we think of as unlikely conditions,” Barstow says.

More eyes on the sky

The scientists are now working to establish more telescopes on the ground to probe this planetary system further, as well as to discover other similar systems. The planetary system’s star, TRAPPIST-1, is known as an ultracool dwarf star, a type of star that is typically much cooler than the sun, emitting radiation in the infrared rather than the visible spectrum.

De Wit’s colleagues from the University of Liège came up with the idea to look for planets around such stars, as they are much fainter than typical stars and their starlight would not overpower the signal from planets themselves.

The researchers discovered the TRAPPIST-1 planetary system using TRAPPIST (TRAnsiting Planets and PlanetesImals Small Telescope), a new kind of ground telescope designed to survey the sky in infrared. TRAPPIST was built as a 60-centimeter prototype to monitor the 70 brightest dwarf stars in the southern sky. Now, the researchers have formed a consortium, called SPECULOOS (Search for habitable Planets Eclipsing ULtra-cOOl Stars), and are building four larger versions of the telescope in Chile, to focus on the brightest ultracool dwarf stars in the skies over the southern hemisphere. The researchers are also trying to raise money to build telescopes in the northern sky.

If the scientists can train more TRAPPIST-like telescopes on the skies, de Wit says, the telescopes may serve as relatively affordable “prescreening tools.” That is, scientists may use them to identify candidate planets that just might be habitable, then follow up with more detailed observations using powerful telescopes such as Hubble and NASA’s James Webb Telescope, which is scheduled to launch in October 2018.

“With more observations using Hubble, and further down the road with James Webb, we can know not only what kind of atmosphere planets like TRAPPIST-1 have, but also what is within these atmospheres,” de Wit says. “And that’s very exciting.”

This research was supported in part by NASA/Space Telescope Science Institute.

Amina Khan of The Los Angeles Times writes that a team of scientists, led by postdoc Julien de Wit, has conducted an atmospheric study of two Earth-sized exoplanets and found that they are rocky and have thin atmospheres. The findings “lend growing support to the idea that such planets might potentially be friendly to life.”

A double transit of two Earth-sized exoplanets allowed an international team of scientists, led by postdoc Julien de Wit, to conduct an atmospheric analysis, writes Vivian Wang for The Boston Globe. The researchers found that “the planets have rocky, rather than gaseous, terrain, and compact, rather than loose, atmospheres — all further indication that they are potentially habitable.”

New findings from EAPS postoc Julien de Wit shows that two previously discovered exoplanets 40 light years from Earth have rocky surfaces, which “represent a unique opportunity to go looking for conditions that would favor life,” writes Rachel Feltman for the The Washington Post.

EAPS postdoc Julien de Wit and his colleagues have analyzed the atmospheres of two potentially habitable exoplanets, reports Alan Yuhas for The Guardian. Based off their observations, de Wit explains that the atmospheres of the planets are probably similar to a “terrestrial planet like Mercury, Venus, Mars and Earth.”