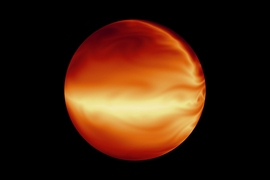 ↓ Download Image
Caption: HD 80606 b (rendered here) stands out amid the hundreds of exoplanets discovered recently because of its highly eccentric orbit. Researchers have studied how the planet’s temperature changes as it approaches, sweeps by, and moves away from its star.

Credits: Courtesy of the researchers and JPL

Caption:
HD 80606 b (rendered here) stands out amid the hundreds of exoplanets discovered recently because of its highly eccentric orbit. Researchers have studied how the planet’s temperature changes as it approaches, sweeps by, and moves away from its star.
Credits:
Courtesy of the researchers and JPL

For centuries, the solar system was viewed as a standard blueprint for planetary systems in the universe, with a star (our sun) at the center of a circular track, and a planet orbiting within each lane. Smaller, rockier planets fill the interior lanes, and larger gas giants orbit further out.

But over the last 20 years, more powerful telescopes have revealed, far from our solar system, a host of exotic systems with completely unexpected configurations. “Hot Jupiters,” for example, are massive “roaster” planets that circle scorchingly close to their stars. Scientists have puzzled over how these gas giants, which supposedly form far from their stars, end up on such blistering orbits.

Now an even weirder planetary system may render the puzzle more challenging. Using NASA’s Spitzer Space Telescope, scientists from MIT, the Space Telescope Science Institute, the University of California at Santa Cruz, and elsewhere have observed an exoplanet by the name of HD 80606 b. This planet is about the size of Jupiter, though four times as massive, and resides in a system 190 light years from Earth, in the constellation Ursa Major.

What makes HD 80606 b stand out amid the hundreds of exoplanets discovered recently is its highly eccentric orbit. Instead of maintaining a circular path, HD 80606 b spends about 100 days of its year traveling an oblong route away from and then returning toward its star, much like the trajectory of a comet. Then, in a matter of just 20 hours, it sweeps around the star, very nearly touching it, before swinging away again. At its closest approach, the planet receives an enormous amount of energy from its star — over a thousand times the energy the Earth receives from the sun each day.

“If the Earth were to be moved that close to our sun, it would lose its atmosphere and turn its surface to magma,” says Julien de Wit, a postdoc in MIT’s Department of Earth, Atmospheric and Planetary Sciences.

In a paper published today in Astrophysical Journal Letters, de Wit and his colleagues report on observations of HD 80606 b over 85 hours, during its closest approach to its star. The researchers have studied how the planet’s temperature changes as it approaches, sweeps by, and moves away from its star. They determined that while the star-facing side of the planet boils up to an extreme 1,400 kelvins (roughly 2,000 degrees Fahrenheit) during the swingby, these roasting temperatures are short-lived. Surprisingly, they found that the planet cools in fewer than 10 hours as it orbits away, reaching temperatures so cold that it becomes invisible to Spitzer for the rest of its orbit.

“This happens every 111 days,” de Wit says. “The good thing is, the planet goes so far away that the process is a complete reset. It’s the same story over and over again.” 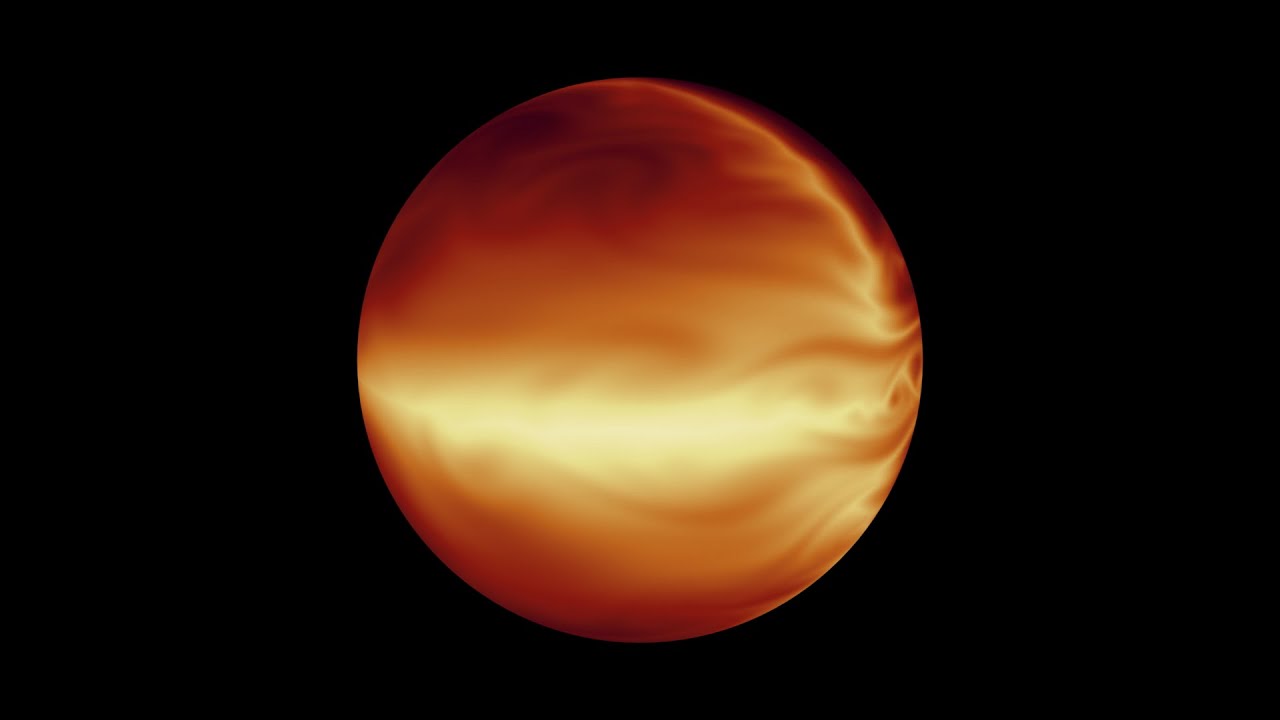 Play video
Check out the exoplanet with a highly eccentric orbit and wild temperature swings.

It’s thought that hot Jupiters start out in circular orbits similar to that of our own Jupiter, far away from their stars. At some point, something large and massive like a nearby star pushes them into eccentric orbits. These planets are then squeezed by their stars’ gravity every time they whip close by. During every close encounter, a fraction of the gravitational energy used to squeeze the planets is dissipated as heat, slowly reducing the eccentricity of the planets’ orbits, which eventually end up tight and circular — a process known as circularization. HD 80606 b, therefore, is thought to be mid-migration, slowing moving from an elliptical to a circular track.

How long the circularization phase lasts depends on how “squishy” or pliable the planet is, given its interior properties. The more pliable a planet, the better it is at dissipating mechanical energy as heat — a trick anyone can experience by repeatedly squeezing a rubber ball, which in turn heats up the ball. Based on the squishiness of the giants in our solar system, the circularization phase is expected to occur over a relatively short period of hundreds of millions of years. Scientists believe this mechanism might explain how hot Jupiters eventually evolved their close-in orbits.

However, the new Spitzer observations suggest that HD 80606 b is not as squishy as expected. Therefore, HD 80606 b is not migrating as fast as previously thought and may maintain its highly eccentric orbit for another 10 billion years or more. If this is the case, de Wit says scientists may have to rethink theories on how hot Jupiters are formed, as it implies that the underlying migration mechanism may not be as efficient as once believed.

De Wit says that alternative theories for how hot Jupiters form — in which gas giants develop close to their stars or smoothly spiral inward with the help of planet-forming disks — may be more likely explanations for hot Jupiter evolution.

The researchers also calculated the planet’s rotation rate — the first exoplanet rotation rate ever obtained. HD 80606 b’s rotation rate, essentially the length of its day, is estimated to be 90 hours, which is twice as long as predicted for this planet.

Heather Knutson, assistant professor of planetary sciences at the California Institute of Technology, says the new observations provide a picture of how the planet’s atmosphere may respond to such extreme temperature swings.

“This planet is Earth’s opposite in almost every regard,” says Knutson, who did not contribute to the research. “It’s a massive gas giant planet on an extremely eccentric orbit around one star in a wide binary system, and experiences a more than 800-fold change in illumination over the course of each orbit.  It’s a terrible place to search for life, but these same properties make it a great test case for atmospheric modelers.”

“This system is undoubtedly very unique as it seems to challenge in many ways our understanding of planet-star interactions and planet formation,” de Wit says. “Hopefully, future studies of similar systems will help us evaluate how special this system is and how far off our initial theories were.”

This work is based on observations made with the Spitzer Space Telescope, which is operated by the Jet Propulsion Laboratory (JPL) and Caltech, under contract to NASA. Support for this work was provided by JPL/Caltech.

Washington Post reporter Rachel Feltman writes that a new study co-authored by MIT postdoc Julien de Wit examines the eccentric orbit of an exoplanet with extreme weather variations. The researchers found that, “every 111 days, the planet swings close to its sun-like host star before being flung back out.”

Researchers have uncovered evidence about how “hot Jupiter” exoplanets form by studying a planet with an eccentric orbit, reports Eva Botkin-Kowacki for The Christian Science Monitor. "This planet is thought to be caught in the act of migrating inward," says MIT postdoc Julien de Wit. "By studying it, we are able to test theories of hot Jupiter formation."