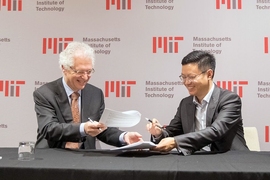 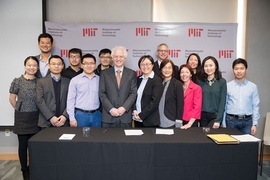 MIT has launched a unique new urban research and innovation program that looks to advance city life in China through an ambitious range of academic and entrepreneurial activities.

“We want to be a pioneer,” said Siqi Zheng, the MIT urban studies associate professor who heads the new lab, speaking at the launch event last Friday. The China Future City Lab, she also noted, will have “a clear focus on China’s sustainable urbanization.”

The China Future City Lab consists of three foundational elements. First, the lab will support a wide range of basic research in China, investigating many aspects of urban social and economic life.

Second, the lab will house a program known as the MIT-Tsinghua Future City Innovation Connector (FCIC), which will support startup teams applying ideas to China’s urban areas. The FCIC will also aim to identify innovative concepts and technologies that could be implemented in China.

As a third element of its activities, the China Future City Lab will engage with Chinese cities that will serve as “living labs” or testing sites where MIT researchers will have a unique opportunity to examine their urban-focused ideas and innovations.

The development of the new lab comes at a time when China has been rapidly urbanizing. Over half of the country’s population now lives in urban areas, up from roughly 20 percent in the early 1980s. As Zheng noted in her remarks on Friday, lessons from this rapid change can be applied to other countries and regions, since the global population is also urbanizing markedly, albeit at a slower pace than in China.

“The new knowledge should have implications everywhere,” Zheng said.

The creation of the China Future City Lab fits closely with a new framework for global activities that MIT released last spring. As detailed in a preliminary report, “A Global Strategy for MIT,” this approach calls for, among other things, enhanced efforts to cultivate collaborative projects in different regions of the world, including China.

“Our intention is to bring the best of MIT to China, and the best of China to MIT, and I know the China Future City Lab will be a key building block of that strategy,” said Richard K. Lester, the associate provost of MIT overseeing the Institute’s international activities, in remarks at the launch on Friday.

China’s urbanization, Lester added, is “of enormous intellectual and practical interest to the MIT community, to our faculty, to our students, across a wide range of disciplines.” The areas of research that figure to be directly involved in the subject, Lester suggested, include urban studies, economics, architecture, management,  computer science, artificial intelligence, transportation systems, and civil and environmental engineering.

In turn, he noted, those disciplines will need to tackle a variety of large-scale problems common to China and other societies, including climate change mitigation and the deployment of clean energy technologies, access to clean water, access to affordable health care, and new challenges brought about by aging populations.

A tradition of engagement — and a renewal of it

As Lester detailed in his remarks, MIT also has a lengthy history of engagement with China. The first Chinese student at MIT arrived in 1877, just 16 years after the Institute opened, and, as shown in an ongoing campus exhibit, “China Comes to Tech,” curated by MIT professor of history Emma Teng, over 400 students from China studied at MIT over the next half-century.

More recently, MIT has been building a more extensive network of institutional ties with China, including parterships within academia. One of those agreements is with Tsinghua University, which is MIT’s partner in the Future City Innovation Connector component of the new lab.

The China City Future Lab also builds upon the precedent established by the Beijing Studio, a 30-year partnership the School of Architecture and Planning established with Tsinghua University that enabled hundreds of MIT students to evaluate urban studies issues in China.

The China Future City Lab is also launching with the help of eight corporate founding members, comprising six private companies and two state-run property firms, that have interests spread across China and Hong Kong. They are:

Executives from the group of founding partners appeared and gave remarks at a launch event on Friday in MIT’s Samberg Conference Center.

A separate symposium for the China Future City Lab, on Thursday, featured talks by several MIT faculty members, as well as remarks from Hashim Sarkis, dean of the School of Architecture and Planning, and Eran Ben-Joseph, head of the school’s Department of Urban Studies and Planning (DUSP).

Zheng is the Samuel Tak Lee Associate Professor of Real Estate Development and Entrepreneurship in DUSP and the Center for Real Estate.

On Friday, Lester lauded Zheng’s work, as both a researcher and a program-builder at the Institute. Zheng has formally been an MIT faculty member for less than a year, but, as Lester noted, she has quickly assembled the kinds of institutional and international support needed to launch a major new project.

“In that short time, she has established herself as a real force, and a builder of new educational and research programs in the very best tradition of MIT,” Lester said.

In her remarks, Zheng emphasized the open-ended nature of the new lab’s work. Set against an urbanizing population and the rapid economic growth of China this century, the nature of urban studies, she suggested, means that scholars need to be open-minded about the kinds of issues they will study and the methods they will use to examine them.

“I’m sure we can explore more and more opportunities,” Zheng said.