MIT-Haiti, Google team up to boost education in Kreyòl 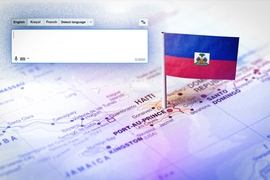 Caption:
Google has teamed with Michel DeGraff's Kreyòl-based STEM education project in Haiti, to add scientific and technical terms to the Kreyòl module of Google Translate.

In recent years, MIT scholars have helped develop a whole lexicon of science and math terms for use in Haiti’s Kreyòl language. Now a collaboration with Google is making those terms readily available to anyone — an important step in the expansion of Haitian Kreyòl for education purposes.

The new project, centered around the MIT-Haiti Initiative, has been launched as part of an enhancement to the Google Translate program. Now anyone using Google Translate can find an extensive set of Kreyòl terms, including recent coinages, in the science, technology, engineering, and math (STEM) disciplines.

“In the past five or six years, we’ve witnessed quite a paradigm shift in the way people in Haiti talk about and use Kreyòl,” says Michel DeGraff, a professor of linguistics at MIT and director of the MIT-Haiti Initiative. “Having Google Translate on board is going to be another source of intellectual, cultural, economic, and political capital for Kreyòl,” he notes, adding that the project will aid “anyone in the world now, if someone is interested in producing text in Kreyòl from any language.”

The concept behind the project is straightforward. In Haiti, most education, especially technical education, traditionally has been conducted in French, even though Kreyòl is the native language of virtually all Haitian citizens. DeGraff, a native of Haiti, has long believed that Kreyòl should be a more central part of Haitian classroom education, and that native Kreyòl speakers would fare better academically and socioeconomically if it were.

In 2013, MIT and Haiti signed a joint initiative to promote education in Kreyòl, in coordination with several Haitian universities and educational institutions. DeGraff has said that the project is intended to help Kreyòl-speaking students “build a solid foundation in their own language,” by using Kreyòl to translate digital learning tools for STEM topics and to develop related educational resources, including lesson plans, learning modules, evaluation instruments, and more.

As part of the project, DeGraff and other colleagues in the MIT-Haiti Initiative, including STEM-focused faculty in Haiti, have developed new STEM-oriented coinages in Kreyòl, to help extend the scope of the language in technical fields.

For instance, consider the English word “torque,” meaning the rotational force applied to an object. Paul Belony, the leader of the physics team for the MIT-Haiti Initiative, came up with a new translation of it in Kreyòl: the word “tòday,” taken from the Kreyòl verb, “tòde,” which refers to wringing out wet clothes, in the process of washing them. The wringing action is a visual example of torque in action, and the term derives from a verb that is common knowledge in Haiti.

“It’s a new technical term,” DeGraff says. “It’s not at all what’s used in French for ‘torque,’ but it creates an image all Haitians will know, and then once you go into the physics of it, you can explain it in a way that makes sense.”

Another example involves translating the English word “likelihood.” Although often used as a colloquial synonym for “probability,” it does not have the same technical meaning in math. In an effort to avoid this kind of confusion in Kreyòl, MIT-Haiti scholars have tried new terms for “likelihood,” currently using the Kreyòl word “panchan” (which translates as “leaning”), a suggestion made by Haitian psychologist and statistician Serge Madhere.

To be sure, as MIT mathematics lecturer and MIT-Haiti member Jeremy Orloff observes, “the final Kreyòl term has not been fixed.” Still, he adds, when a new word for “likelihood” does become settled in Kreyòl, it figures to be “a big improvement on the unhelpful legacy from French or English,” which will help to avoid the conflation of “likelihood” and “probablility.”

Those are precisely the new kinds of word that appear in the lexicon available through Google Translate. And while those terms are now being used in education programs within Haiti, their integration into Google’s powerful translation tool means they “will be re-usable by anyone with an interest in producing Kreyòl materials,” as DeGraff puts it.

The collaboration between MIT-Haiti and Google is also an important step forward, as DeGraff sees it, in terms of adding new stakeholders to the project of disseminating Kreyòl widely.

“It sends a message that we can no longer be stopped by this belief that Kreyòl is not for science,” DeGraff says. “That’s the key, because we feel we are at this tipping point where more and more people are accepting the language, at the highest levels of science and math education, and most everywhere else in Haitian society, and even outside Haiti — for example, right here in Boston where a new dual language program in English and Kreyòl is being launched by the Boston Public Schools system.”

The MIT-Haiti Initiative has received funding from the U.S. National Science Foundation, MIT, the Wade Foundation, and the Open Society Foundation. Since the initiative’s inception in 2010, partner institutions in Haiti have included the Lekòl Kominotè Matènwa, the State University of Haiti, Université Caraïbe, École Supérieure d’Infotronique d’Haïti, Université Quisqueya, NATCOM, the Foundation for Knowledge and Liberty, Haiti’s Ministry of National Education and Professional Training, Haiti’s Prime Minister’s Office, the U.S. Embassy in Haiti, and Sûrtab.

A champion of Creole