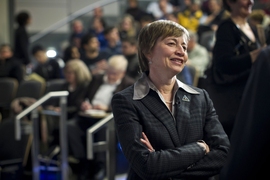 “Our unwavering commitment to promoting the progress of science has opened new windows on the universe, made possible new industries, and improved the lives of all Americans,” MIT Vice President for Research Maria T. Zuber told members of the U.S. House of Representatives at a March 21 hearing of the Subcommittee on Research and Technology of the Committee on Science, Space, and Technology, speaking in her role as chair of the National Science Board (NSB).

“The question before us,” she continued, “is will the world’s richest, most powerful nation continue to invest in our future? Do we still want to be the first to know, to understand, to discover, to invent?”

The 25-member NSB is the governing board for the National Science Foundation (NSF). Zuber appeared before the subcommittee at the second in a series of hearings examining the foundation’s role in the federal research enterprise. Also testifying on the topic of “Future Opportunities and Challenges for Science” were Joan Ferrini-Mundy, acting chief operating officer of the NSF; Jeffrey Spies, co-founder of the Center for Open Science and an assistant professor at the University of Virginia; and Keith Yamamoto, vice chancellor for science, policy, and strategy at the University of California at San Francisco.

Subcommittee Chairwoman Barbara Comstock, R-Va., set the stage in her opening remarks, acknowledging NSF’s success in keeping the United States at the forefront of science for nearly 70 years, while asking what should be done to maintain leadership for the next 70 years. The Science Committee, she said, is looking to address a full reauthorization of the foundation later this year, building on the American Innovation and Competitiveness Act signed into law in January. “We want to make sure that the way we fund, support, and conduct science is as innovative as the research it produces,” Comstock said.

But, she added, this must be done in the face of new challenges (such as priority setting under budget constraints) and opportunities (such as the proliferation of data available from a variety of sources). NSF’s continuing role in educating the next generation of science-literate workers, Comstock said, is also a major interest for the committee.

Rep. Daniel Lipinski, D-Il., the ranking member of the Subcommittee, replied that Science Committee members of both parties share the desire to maximize the benefits of federal investments in science, but sometimes disagree about methods. Among the topics to be discussed at the hearing, he listed research reproducibility, scientific integrity, and maximizing access to data obtained via federally sponsored research as points of agreement, along with a desire to balance disciplinary and cross-disciplinary research opportunities. But disagreements have arisen in recent years regarding the degree to which Congress should specify prioritization among scientific disciplines.

Ferrini-Mundy highlighted four features of NSF’s approach to fulfilling its mission “to promote the progress of science; to advance the national health, prosperity, and welfare; and to secure the national defense”:

Through seven decades, she said, these features have led to transformational discoveries across many fields of science and engineering, which in turn have fueled innovation across American industry and society — much as Vannevar Bush envisioned in “Science, the Endless Frontier,” the post-World War II manifesto which ultimately led the creation of the National Science Foundation.

Zuber also referred to Bush’s vision, describing it as the foundation of a 70-year partnership between Congress, U.S. presidents, and the research community which has brought NSF to the pre-eminent position it holds today. She urged the committee not to let budget constraints, the national discourse regarding limitations to the role of government, international competition, and other current challenges unravel that partnership. She offered three suggestions for moving ahead:

Only a federal partnership with the research community, Zuber said, can afford the kinds of long-term investments in high-risk science that pay off in discoveries such as last years’ observations of gravitational waves by the LIGO Scientific Collaboration. NSF funded that work for 20 years before the first waves were detected.

In his testimony and in a question and answer session with committee members, Spies discussed how NSF might make its research portfolio more transparent and more efficient through the adoption of additional policies encouraging broad access to research data. Yamomoto stressed the growing opportunities for transdisciplinary research, calling for new methods for evaluating proposals that do not fit neatly in disciplinary silos. Ferrini-Mundy pointed out that several current NSF efforts, such as “Innovations at the Nexus of Food, Energy, and Water Systems,” and “Secure and Trustworthy Cyberspace,” adopt these perspectives, as does the interagency BRAIN Initiative.

Another Q&A topic was NSF’s record for supporting young scientists. Ferrini-Mundy reported that, unlike some other federal agencies, NSF does not collect the age of grant applicants. But it does allow them to report the time since they received their last degree. Applicants seven years or less post-degree have about an 18 percent chance of receiving a grant, compared to 22 percent for more experienced applicants. Zuber pointed out that the NSF also supports many scientists even earlier in their career, as graduate students and postdocs. Yamamoto said he thinks opportunities are good once an early-career scientist is able to apply for their own grants, but that this happens too late. He believes too much emphasis is placed on extended graduate work and postdoctoral positions. Most research scientists, he said, should have the opportunity to seek independent grants four to eight years after they begin graduate school.

All four witnesses stressed the importance of strong NSF support in and across all areas of science and engineering, including two areas which have come under scrutiny from committee leadership in the last few years: the social and behavioral sciences, and geoscience. Yamomoto highlighted important contributions from social and behavioral scientists to transdisciplinary research programs, while Zuber spoke to their role in protecting national security. She pointed out that the social and behavioral sciences are now using computational resources at the scale they were used a decade ago in the mathematical and physical and sciences. It would be a tragedy, she said, to cut back on this work just as appears to be poised for a breakthrough.

Zuber, whose academic title is E.A. Griswold Professor of Geophysics within the MIT Department of Earth, Atmospheric and Planetary Sciences, also gave a spirited defense of the work of NSF’s geosciences directorate. The U.S. has moved a long way toward energy independence, she observed, based on the improved understanding of subsurface science behind hydraulic fracking technology. NSF’s geosciences program, she continued, also funds polar science and studies of the Earth’s atmosphere and geosphere. These studies are important to maintaining much of the infrastructure on which many modern commercial and emergency services depend, such as telecommunications, the electrical grid, and the Global Positioning System.

Maria Zuber elected as chair of the National Science Board