Maria Zuber elected as chair of the National Science Board 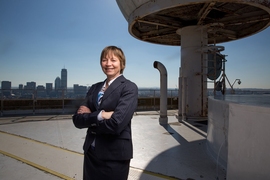 The following is adapted from a National Science Foundation press release.

For the first time in the history of the National Science Foundation (NSF), women now hold three key leadership positions — director of the NSF, and chair and vice-chair of its governing body, the National Science Board (NSB). During its May meeting, the NSB elected Maria Zuber, vice president for research at MIT, as its board chair, and Diane Souvaine, vice provost for research at Tufts University, as its vice chair. Zuber and Souvaine replace Dan Arvizu and Kelvin Droegemeier, who stepped down from the Board after twelve years of service, the last four as chair and vice chair.

Zuber’s research bridges planetary geophysics and the technology of space-based laser and radio systems, and she has published over 200 papers. She has held leadership roles associated with scientific experiments or instrumentation on nine NASA missions and remains involved with six of these missions. The E.A. Griswold Professor of Geophysics at MIT, Zuber is a member of the National Academy of Sciences and the American Philosophical Society, and is a fellow of the American Academy of Arts and Sciences, the American Association for the Advancement of Science, the Geological Society of America, and the American Geophysical Union. In 2002, Discover magazine named her one of the 50 most important women in science. Zuber served on the Presidential Commission on the Implementation of United States Space Exploration Policy in 2004.

Jointly, the 24-member NSB and the NSF director pursue the goals and function of the Foundation. The NSB establishes the policies of NSF within the framework of applicable national policies set forth by the president and Congress. The board also identifies issues that are critical to NSF's future, approves the agency’s strategic budget directions and the annual budget submission to the Office of Management and Budget, and new major programs and awards. The NSB serves as an independent body of advisors to both the president and Congress on policy matters related to science and engineering and education in science and engineering. In addition to publishing major reports, the NSB publishes policy papers and statements on issues of importance to U.S. science and engineering.

NSF director and NSB member ex officio France Córdova said, “I am delighted to say, on behalf of NSF, that we are thrilled with Dr. Zuber's election as chair of the National Science Board. As a superb scientist and recognized university leader, she has the skills needed to help guide the agency's policies and programs. I look forward to working with her as NSF launches new big ideas in science and engineering.”

Zuber is in her fourth year on the NSB and has served on its Committee on Strategy and Budget.

“It is a privilege to lead the National Science Board and to promote NSF’s bold vision for research and education in science and engineering,” said Zuber. “The outcomes of discovery science inspire the next generation and yield the knowledge that drives innovation and national competitiveness, and contribute to our quality of life. NSB is committed to working with Director Córdova and her talented staff to assure that the very best ideas based on merit review are supported and that exciting, emerging opportunities — many at the intersection of disciplines — are pursued.”

A theoretical computer scientist, Souvaine’s research in computational geometry has commercial applications in materials engineering, microchip design, robotics, and computer graphics. She was elected a fellow of the Association for Computing Machinery for her research and for her service on behalf of the computing community. A founding member, Souvaine served for over two years with the NSF Science and Technology Center on Discrete Mathematics and Theoretical Computer Science, that originally spanned Princeton University, Rutgers University, Bell Labs, and Bell Communications Research. She also works to enhance precollege mathematics and foundations of computing education and to advance opportunities for women and minorities in mathematics, science, and engineering.

“I am truly honored and humbled by this vote of confidence from such esteemed colleagues. I do not take this responsibility lightly,” said Souvaine. “The board is proud of NSF’s accomplishments over its 66 years, from the discovery of gravitational waves at LIGO to our biennial Science and Engineering Indicators report on the state of our nation’s science and engineering enterprise. I look forward to working with Congress, the administration, the science and education communities, and NSF staff to continue the agency’s legacy in advancing the progress of science.”

The president appoints NSB members, selected for their eminence in research, education, or public service and records of distinguished service, and who represent a variety of science and engineering disciplines and geographic areas. Board members serve six-year terms, and the president may reappoint members for a second term. NSF's director is an ex officio 25th member of the board.

Maria Zuber, MIT’s vice president for research, speaks with Science’s Jeffrey Mervis about her new role as chair of the National Science Board. “U.S. research and education are really what has kept this country at the forefront,” says Zuber. “I think that even in this environment… research spending ought to still be up.”