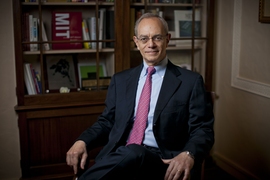 Noting that President-elect Trump has announced his intention to reinvest in public infrastructure, Reif noted in an op-ed published in Tuesday’s newspaper, “we must also rebuild another kind of infrastructure now eroding — by renewing our national commitment to fundamental science.”

For decades, federal research and development (R&D) funding provided the basis for much of the nation’s innovation and economic growth, Reif noted. The development of GPS technology, MRI scanners, and E-commerce, to name just a few examples, all rest on knowledge gleaned through fundamental research.

At its height in the 1970s, government funding for basic research represented more than 2 percent of the U.S. gross domestic product (GDP), according to Reif. Known as R&D intensity, this ratio measures society’s commitment to science, and by 2014, it had dropped to just 0.78 percent of the GDP. Furthermore, “industry hardly touches the earliest form of “R” — fundamental science — although that is where the gains can be transformational,” the op-ed states.

The United States has long been the unquestioned global leader in transformative science, but without more federal support for basic research, the country is at risk of falling behind. China is set to overshadow total U.S. government R&D spending within a decade, Reif noted. “We should not be surprised if, within a generation, the talent and the discoveries go to the countries with the wisdom to invest in them,” he wrote.

“Any of us who travel to the great Asian transit centers — Hong Kong, Shenzhen, Beijing — know the sinking sensation upon realizing that the airport we just came from in the U.S. is way out of date. For the sake of the nation’s future, we must not allow the invisible infrastructure of our scientific enterprise to suffer the same fate,” he concluded.