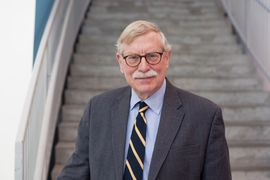 From climate change to health and medicine, many of today’s national policy issues are intrinsically linked to science and technology. A scant few of the lawmakers shaping these policies were trained as scientists or engineers, however. Fortunately for them, they have William Bonvillian and his team in the MIT Washington Office.

The Washington Office provides a two-way conduit for information between the Institute and policymakers on Capitol Hill. Directed by Bonvillian for the last 11 years, the office ensures that knowledge generated at MIT makes an impact among decision makers in the White House, Congress, national research and development agencies, and other Washington organizations. The office also helps MIT’s leadership and faculty stay abreast of policy developments in R&D funding, innovation, energy, or other areas where science, technology, and policy intersect.

Bonvillian, who announced today that he will be stepping down in January, was a senior policy advisor in the U.S. Senate for 17 years before joining MIT in 2006. Among his many contributions to the MIT Washington Office, he worked with faculty and researchers at the Institute on MIT’s policy initiatives, establishing an important new model for providing lawmakers with cutting-edge and interdisciplinary perspectives from outside the Beltway.

Bonvillian plans to maintain his ties to MIT after leaving the Washington Office; he will teach a semester-long course on science and technology policy, in addition to the Independent Activities Period (IAP) course he has taught for nine years, and he plans to work on research projects with the Industrial Performance Center. He spoke with MIT News about the work of the Washington Office and importance of the connections between MIT and Capitol Hill.

Q: Why does MIT have a Washington Office?

A: The Washington Office was formally set up in 1991, when Chuck Vest was president of the Institute, but MIT’s role and presence in Washington long predates that. The onslaught of World War II really marked MIT’s deep involvement in national policymaking. Vannevar Bush is legendary as the former dean of engineering and vice president of MIT who came to be Franklin Delano Roosevelt’s science czar, and who organized science for the coming conflict.

MIT’s presidents have long viewed it as their responsibility to be involved in national policymaking. Karl Compton [who served as MIT’s president from 1930 to 1948] was deeply involved, and so were many others at MIT. The Radiation Laboratory, or Rad Lab, was formed at MIT and became the model by which science was going to be organized at the federal level to serve the public interest.

A figure I’m fond of citing is that MIT received 80 times more funding in the course of World War II than its previous 80 years of existence. This period marked the advent of the federal research university, and MIT has been deeply involved in that system ever since. James Killian [MIT’s president from 1948 to 1959] was Eisenhower’s science and technology advisor, for example, and Jerry Wiesner [MIT’s president from 1971 to 1980] served in that role for John F. Kennedy. I was pleased to work for two presidents, Susan Hockfield and Rafael Reif, who continued the tradition.

Q: What have been some of the office’s main efforts in the last few years?

A: We serve as a link between the national R&D agencies and MIT’s faculty and administration. We work to understand where the agencies are headed, what they’re thinking, what new directions they want to move in. And we communicate to them MIT’s thinking on that, and where MIT thinks the opportunity spaces are.

Our second core task is communication with Congress. MIT doesn’t seek earmarks or funding for particular research awards from Congress — we carefully avoid that — but MIT does worry about where the federal research enterprise is going. In our office, we watch the overall funding support that Congress provides and link MIT faculty and leadership into that debate.

We also connect MIT students with opportunities in the policy process. Our office has close working relations with the student group the Science Policy Initiative, and we organize a series of events with them every year. I teach a course on science and technology policy in IAP, for example, and we bring about 25 members of that group for an annual day of visits with members of Congress and another multiday trip for meetings with a variety of R&D and nongovernmental organizations. It’s really an education for them on how the policy process works and on the science policy apparatus here in Washington.

Finally, there are the MIT policy initiatives. This is the significant new piece that’s been added to the office in recent years but it’s part of MIT’s long history of thinking that it should be engaged in national policy making process around science and technology. This effort came out of the MIT Energy Initiative (MITEI) originally. It was put together by MIT faculty members like Ernest Moniz, who has been the U.S. Energy Secretary under the Obama Administration; Bob Armstrong, the current director of MITEI; and John Deutsch, who has served in multiple federal appointments since the 1970s. The first study drew on input from all of MIT’s schools to think about what the future might be for nuclear power, and what the big challenges were. This has led to a series of major energy studies, very cross-disciplinary in nature, that have tackled topics from nuclear power, to carbon capture and sequestration, to the grid, to solar energy. The upcoming report will be on the future of the utility and is expected out in mid-December. These have all made a major contribution to policymaking in the energy field. As one former energy secretary told MIT’s president in my presence, “Keep doing these. We can’t do these at the DOE. We have plenty of physicists, even some engineers, but we don’t have the broad range of perspectives that these reports bring.”

That was the first and the model. Since then there has been a major effort, with reports in 2011 and 2016, around convergence, the idea that the next generation of health research advances must assimilate approaches and insights from many different disciplines — that biology must engage with the physical, computational, and engineering sciences. The current administration has picked up this convergence approach, with its BRAIN Initiative and other initiatives on precision medicine and the microbiome. DARPA has now opened a Biological Technologies Office on the convergence model. So, there has been a lot of movement on this front.

Other MIT policy initiatives have covered advanced manufacturing (where MIT’s work led to President Obama’s largest technology initiative), online learning, the central role of basic research, and more. The newly announced “The Engine” could lead to another. The role of the Washington Office is to support these initiatives and bring the reports to Washington, organizing the follow-up meetings between the report’s faculty leaders and policymakers.

Q: What are some of the biggest science policy challenges you see in the near future?

A: A major issue has been imposition of budget sequestration on the domestic, discretionary part of the budget. This includes R&D and applies to both defense and nondefense spending. That’s a major dilemma causing stagnation in the U.S. research portfolio. Federally funded R&D support is foundational for industry R&D, which is now overwhelmingly focused on development as opposed to research. So if you’re curtailing research, you’re going to over time affect development as well. It’s a real dilemma.

MIT and other universities have argued against sequestration, for the sake of the country’s innovation system. These funding constraints are box we need to escape out of. This was imposed in 2013, and Congress, realizing the problems it had created, has significantly modified sequestration for R&D for 2014 to 2017. But this dilemma still remains in place through 2023.