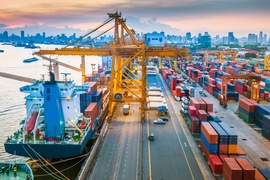 ↓ Download Image
Caption: MIT Professor César Hidalgo and his colleagues argue that everything else being equal, the complexity of a country’s exports also correlates with its degree of economic equality: The more complex a country’s products, the greater equality it enjoys relative to similar-sized countries with similar-sized economies.

Caption:
MIT Professor César Hidalgo and his colleagues argue that everything else being equal, the complexity of a country’s exports also correlates with its degree of economic equality: The more complex a country’s products, the greater equality it enjoys relative to similar-sized countries with similar-sized economies.

In a series of papers over the past 10 years, MIT Professor César Hidalgo and his collaborators have argued that the complexity of a country’s exports — not just their diversity but the expertise and technological infrastructure required to produce them — is a better predictor of future economic growth than factors economists have historically focused on, such as capital and education.

Now, a new paper by Hidalgo and his colleagues, appearing in the journal World Development, argues that everything else being equal, the complexity of a country’s exports also correlates with its degree of economic equality: The more complex a country’s products, the greater equality it enjoys relative to similar-sized countries with similar-sized economies.

“When people talk about the role of policy in inequality, there is an implicit assumption that you can always reduce inequality using only redistributive policies,” says Hidalgo, the Asahi Broadcasting Corporation Associate Professor of Media Arts and Sciences at the MIT Media Lab. “What these new results are  telling us is that the effectiveness of policy is limited because inequality lives within a range of values that are determined by your underlying industrial structure.

“So if you’re a country like Venezuela, no matter how much money Chavez or Maduro gives out, you’re not going to be able to reduce inequality, because, well, all the money is coming in from one industry, and the 30,000 people involved in that industry of course are going to have an advantage in the economy. While if you’re in a country like Germany or Switzerland, where the economy is very diversified, and there are many people who are generating money in many different industries, firms are going to be under much more pressure to be more inclusive and redistributive.”

Joining Hidalgo on the paper are first author Dominik Hartmann, who was a postdoc in Hidalgo’s group when the work was done and is now a research fellow at the Fraunhofer Center for International Management and Knowledge Economy in Leipzig, Germany; Cristian Jara-Figueroa and Manuel Aristarán, MIT graduate students in media arts and sciences; and Miguel Guevara, a professor of computer science at Playa Ancha University in Valparaíso, Chile, who was a visiting PhD student at the MIT Media Lab when the work was done.

For Hidalgo and his colleagues, the complexity of a product is related to the breadth of knowledge required to produce it. The PhDs who operate a billion-dollar chip-fabrication facility are repositories of knowledge, and the facility of itself is the embodiment of knowledge. But complexity also factors in the infrastructure and institutions that facilitate the aggregation of knowledge, such as reliable transportation and communication systems, and a culture of trust that enables productive collaboration.

In the new study, rather than try to itemize and quantify all such factors — probably an impossible task — the researchers made a simplifying assumption: Complex products are rare products exported by countries with diverse export portfolios. For instance, both chromium ore and nonoptical microscopes are rare exports, but the Czech Republic, which is the second-leading exporter of nonoptical microscopes, has a more diverse export portfolio than South Africa, the leading exporter of chromium ore.

The researchers compared each country’s complexity measure to its Gini coefficient, the most widely used measure of income inequality. They also compared Gini coefficients to countries’ per-capita gross domestic products (GDPs) and to standard measures of institutional development and education.

According to the researchers’ analysis of economic data from 1996 to 2008, per-capita GDP predicts only 36 percent of the variation in Gini coefficients, but product complexity predicts 58 percent. Combining per-capita GDP, export complexity, education levels, and population predicts 69 percent of variation. However, whereas leaving out any of the other three factors lowers that figure to about 68 percent, leaving out complexity lowers it to 61 percent, indicating that the complexity measure captures something crucial that the other factors leave out.

“There’s now a lot of focus on income inequality,” says Ron Boschma, a professor of regional economics at Utrecht University. “It’s back on the political and scientific agenda. [The MIT researchers’ work] is a very interesting take on this topic that has not been done yet, and in that respect it’s a great contribution.”

“It also adds to the existing literature in development economics, where they often refer to a so-called inverted U-shape curve, the Kuznets curve, that relates the level of income inequality to the level of GDP of a country,” Boschma adds. “But of course, they always use quite crude measures. In this paper they come up with a much more sophisticated indicator in which they look at the industrial structure of economies."

Noah Smith of Bloomberg writes that the foreign trade theory proposed by Prof. Cesar Hidalgo and his research team suggests that a country’s future growth is determined by how many different products it makes. This forecasting method is based on “the level of regulation or the amount of investment in education,” explains Smith.

Financial Times reporter Tim Harford writes that a study by MIT researchers explores how a country's exports can influence income inequality. The study shows “a relationship between inequality and lack of economic complexity. Holding other things constant, the simplest economies tend to be the most unequal.”