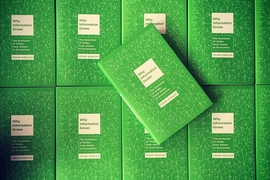 Cesar Hidalgo, the Asahi Broadcasting Corporation Associate Professor of Media Arts and Sciences at the MIT Media Lab, has a PhD in statistical physics, but he’s applied the tools of that discipline to topics ranging from the dissemination of cultural information to economic development. In 2012, he signed a contract with Basic Books to write a book about his views on economic development.

But once he started writing, he began to think of economic development as an aspect of a more general phenomenon: the growth of physical order, or information. In the end, a description of his research on economic development constitutes the final fourth of a book titled “Why Information Grows: The Evolution of Order, from Atoms to Economies,” published this month. Hidalgo discussed the book with MIT News.

Q. How are you using the term “information”?

A. I use information to refer to raw physical order. At the beginning of chapter two, I give the example of the world’s most expensive car, a Bugatti Veyron, which a Chilean bought for $2.5 million. Imagine that you just won that car in the lottery, and you crash into a wall and total it. Now how much is that Bugatti Veyron worth? You don’t need a PhD in economics to know that the value dropped considerably. But what changed? Well, the atoms of the car did not change. What changed was the way in which those atoms were connected. That order is information.

So eventually, everything in our economy involves concoctions of physical order, and economies are nothing other than the distributed computers that compute that physical order.

Q. So why does information grow?

A. The universe has this tendency of averaging itself out: Heat flows from hot to cold, and music vanishes as sound waves travel through the air. So how the heck does the universe get to have a planet like Earth, that is so rich in information, and that at the same time is governed by the second law of thermodynamics?

One of the main clues to answering that question came from Ilya Prigogine, who won the 1977 Nobel Prize in chemistry. He was the first one to solve a statistical-physics system that was out of equilibrium. And he found that, in out-of-equilibrium systems, order emerges naturally.

The basic example of that is a bathtub full of water. When you take out the plunger, you have a little whirlpool. That whirlpool is the steady state of a system that is out of equilibrium. It has a lot of correlations, because the velocity of the molecules that are neighboring each other in the whirlpool tends to be the same.

But that mechanism can’t explain more complex forms of information, so there have to be a few more mechanisms at play. The second ingredient is that for information to endure, it has to be deposited in solids. Think about your body: Obviously, if you cut a person, it’s very juicy inside. But in reality, a person is not that juicy, because at a much finer scale there are aperiodic crystals — like DNA, RNA, and proteins — that are technically solids. Because they’re solids, they’re able to shield the order in them against entropy for a very long time. So the second ingredient for the growth of information is to have solids that allow information to last so that you can recombine it and create more information.

The final ingredient is that matter needs to develop the capacity to compute. All life forms are computers that are ingesting physical order and generating physical order, whether it’s at the molecular level, in the case of the cells, or in the nervous system, like we do.

So together, out-of-equilibrium systems, solids, and the computational capacities of matter explain the physical origins of information.

Q. How does all of this tie into your research on economic growth?

So the question then is, “How do people form the networks they need to increase their computational capacity?” In traditional economic approaches, people see these networks as an epiphenomenon of economic activity. You have something that I want to buy, so we connect and make a transaction; then we go our separate ways. But this is an oversimplification. What sociologists, like Mark Granovetter, showed is that there is a lot of pre-existing social structure, like families, that embed economic activity.

This pre-existing social structure, and social institutions such as trust, are important for the accumulation of computation capacity. As Francis Fukuyama argued in his  book “Trust,” societies that differ in their levels of trust gravitate to different types of industries. On the one hand, you have familial societies, in which people don’t trust each other. Here, companies tend to be managed by a relatively small group of people who are all related by family. Their computational capacity is modest. They’re going to gravitate toward industries like agriculture or extractive industries or finance or retail, where basically you can have a few brothers manage the business.

In trust-based societies, where people trust each other more, the cost of links is lower, and people tend to form large networks with non-kin. In those non-kin societies, you have, let’s say, a Steve Jobs and a Steve Wozniak and a Jonny Ive. You have a diverse pool of talent that creates large networks that gravitate toward complex industries where humans crystallize a lot of imagination. In trust societies, people gravitate towards the aerospace industry, car manufacturing, electronics, pharmaceuticals — the most complex industries, because they’re able to form larger networks that can accumulate more computation.

So countries with a lot of trust and good institutions can create very complex computers that are able to process large volumes of information and create complex products that are rare and have a big premium on the market. So by thinking of economies in terms of information and computation, you can also connect institutions with the mix of products that countries make and with wealth. A social network is nothing other than a distributed computer.

A. T. Oxford of the Economist reviews “Why Information Grows” by Prof. César Hidalgo, in which he argues that economic growth is tied to the growth of information. “In his research, Mr Hidalgo’s used nifty techniques in statistical physics and network theory to shine a light on the diversity of production across countries,” Oxford explains.

The Economist highlights Prof. César Hidalgo’s new book, which examines how economies grow. “His aim is nothing less than to lay out a universal theory of information—one that applies to everything, from the lifeless to the living, and to all scales, from atoms to economies.”

Professor César Hidalgo discusses his new book “Why Information Grows” with James Ball of The Guardian. “Most people think of information as messages that communicate the state of a system,” says Hidalgo. “Information actually is physical and it is not only involved in messages but is also involved in objects.”

Professor César Hidalgo writes for The Huffington Post about his new book “Why Information Grows: The Evolution of Order, from Atoms to Economies.” Hidalgo explains his view that, “by understanding economies as computers we get much more than a predictive theory of future economic growth.”

Financial Times reporter Eric Beinhocker reviews Prof. César Hidalgo’s new book, “Why Information Grows: The Evolution of Order, from Atoms to Economies.” Beinhocker writes that Hidalgo’s book is, “the future of growth theory and his thought-provoking book deserves to be widely read.”