How cities can fight climate change most effectively 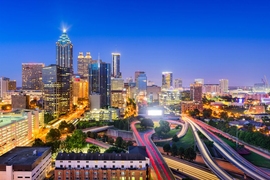 ↓ Download Image
Caption: Researchers looked at 11 metro areas — including Atlanta, Georgia, pictured — to examine how much local emissions-reductions programs can help combat climate change. They found that there is likely to be greater impact in the area of residential energy rather than transportation, especially given local hurdles against more compact development.

Caption:
Researchers looked at 11 metro areas — including Atlanta, Georgia, pictured — to examine how much local emissions-reductions programs can help combat climate change. They found that there is likely to be greater impact in the area of residential energy rather than transportation, especially given local hurdles against more compact development.

What are the best ways for U.S. cities to combat climate change? A new study co-authored by an MIT professor indicates it will be easier for cities to reduce emissions coming from residential energy use rather than from local transportation — and this reduction will happen mostly thanks to better building practices, not greater housing density.

The study analyzes how extensively local planning policies could either complement the Obama administration’s Clean Power Plan (CPP) of 2015 or compensate for its absence. The CPP is intended to reduce greenhouse gas emissions from power plants. In early 2016, a U.S. Supreme Court ruling halted the measure’s potential enactment; the legal case is unresolved and the Trump administration has announced it intends to unwind the CPP.

“Our take-home message is that cities can do a lot at the local level with housing stock,” says David Hsu, an assistant professor in MIT’s Department of Urban Studies and Planning, and one of three co-authors of a new paper detailing the study’s findings. However, he adds, “In transportation, cities can’t make up for the loss of a national strategy.”

The researchers also found that policies with the biggest local impact vary from city to city, with faster-growing Sun Belt cities such as Houston and Phoenix having the potential to enact a bigger reduction in residential emissions than older cities such as Boston or Philadelphia, which see less change in their housing stock.

“For some cities, some policies will clearly be more effective than others,” Hsu observes.

Does the climate battle start at home?

To conduct the study, the researchers examined economic, environmental, and demographic data from 11 major U.S. cities, then developed models projecting emissions through the year 2030, based on a series of different policy scenarios.

For instance, to analyze ways of cutting emissions from residential energy by 2030, the researchers modeled a baseline scenario in which housing characteristics remained the same. They also modeled scenarios featuring a variety of changes, including the implementation of new energy-efficient construction standards, the building of more multifamily homes, and the retrofitting of homes to save energy.

Perhaps surprisingly, there was relatively less benefit from a scenario in which the number of newly built single-family homes was reduced by 25 percent by 2030 and replaced by multifamily buildings. This greater housing density “would have virtually no incremental benefit in terms of reduced residential energy use and CO2 emissions,” as the paper states.

“Shifting people to multifamily buildings is what planners have always wanted to do, but that’s actually not as effective as most advocates would have thought,” Hsu says.

The main reason for this, the researchers find, is that as new homes become more energy-efficient, the energy-use differences between larger single-family homes and homes in multifamily dwellings will shrink, thus “reducing the energy and emissions benefits of any substituting attached homes for detached ones,” as the paper states. (The study did find that in Phoenix, one of the 11 cities examined, greater density would have a notable effect on emissions.)

In any case, as Hsu notes, the impact of policies related to construction standards and retrofitting alone is significant: “You can do a lot of things at the local level to affect housing stock that are basically equivalent or even more aggressive than the Clean Power Plan.”

All told, housing accounts for about 20 percent of U.S. carbon dioxide emissions, according to the U.S. Energy Information Administration. As the researchers state in the paper, the “full suite of residential energy conservation programs” could lower total U.S. carbon dioxide emissions by nearly 12 percent compared to the “business-as-usual” projections for 2030, when coupled with the CPP, and by 9 percent even without implementation of the CPP.

On the transportation side, the researchers also modeled urban emissions growth through the year 2030. They again evaluated a baseline scenario in which current conditions essentially continue intact, as well as a handful of alternate scenarios in which total vehicle-miles traveled varies due to increased use of mass transit and changes in housing density.

The scholars also compared the effects of these local planning efforts to the reduction in emissions that would occur under the Obama administration’s plan to increase the fuel efficiency of the automobile fleet to 54.5 miles per gallon by the year 2027.

The study’s bottom-line finding is that, by 2030, a federal mandate increasing vehicle fuel efficiency to 54.5 miles per gallon would reduce auto-based emissions in the 11 cities by 38 percent, in the absence of any additional mass transit or density programs. That number would increase to 46 percent, on average, if the cities adopted robust transit and density policies. (The Trump administration has stated it will review and may possibly drop the existing fuel-efficiency plan.)

“The results for increasing the average fuel efficiency of the U.S. fleet are still stronger than what we can do on the planning side,” Hsu says. However, he notes, that is a relative outcome, and incremental emissions reductions from increased use of mass transit, among other things, may well be worth pursuing at the municipal level.

Your mileage may vary

As the researchers readily acknowledge, the study is based on modeling, and changing circumstances could alter their projections. For example, a rapid electrification of the automobile fleet, as the paper states, “could substantially reduce the amount of emissions” per vehicle-mile.

The paper also makes clear that the average effects found across the 11 cities vary considerably. Mandating that newly built homes be more energy efficient would reduce residential emissions by 10 to 13 percent in Houston and Phoenix, but only by 3 to 5 percent in slower-growing metro areas, including Boston, Chicago, Cleveland, and Philadelphia.

To be sure, the amount of emissions reduction possible in any urban area also depends on existing levels. Cleveland and Denver, which both rely heavily on coal-fired power plants, have the highest rates of emissions per units of energy produced; they produce 34.3 and 32.7 kilograms of carbon dioxide emissions per million BTU (a standard unit of the heat required to raise water temperature), respectively.

Los Angeles, by contrast, produces only 10.7 kilograms of carbon dioxide emissions per million BTU, making its energy use about one-third as carbon-intensive as that of Cleveland and Denver. Ultimately each metropolitan area, Hsu suggests, may have to find its own path toward a clean energy future.

“We’re trying to be hopeful,” Hsu says. “It’s really just [about] getting planners to think about what makes sense in their market. There’s not going to be a policy idea that works everywhere equally. … If you have a fixed amount of time and political capital and focus, you should do the most efficient thing.”