The art of the dealers 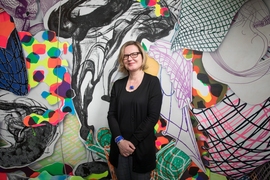 ↓ Download Image
Caption: “Beautiful, unusual objects that were made hundreds of years ago allow us a different point of access into the past,” says MIT professor Kristel Smentek. 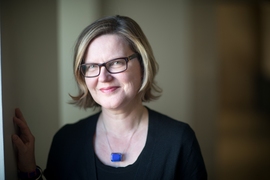 ↓ Download Image
Caption: “The undergraduates in my classes come from anywhere across the Institute,” Smentek observes. “It’s a truly diverse, exciting mix and each student brings different ideas to the table.”

Caption:
“The undergraduates in my classes come from anywhere across the Institute,” Smentek observes. “It’s a truly diverse, exciting mix and each student brings different ideas to the table.”

Who doesn’t like a good story about art, international espionage, and global commerce? Consider this one. In 1765, the French government of Louis XV dispatched two emissaries to China with six large tapestries intended for the Qianlong emperor. In theory, this was a gesture of Enlightenment universalism by France’s minister of state, Henri-Leonard Bertin.

In reality, the aim of the mission was closer to industrial espionage. The envoys were two Chinese Catholics, Aloys Ko and Etienne Yang, who were traveling home after over a decade in France. Bertin wanted them to send him trade secrets, about canals, military technology, and especially Chinese porcelain. Global markets and power were at stake.

Ko and Yang were only partly successful. They sent back much new information but could not help engineer a French-Chinese alliance to hem in Russia, as Bertin wanted. Yang was even imprisoned for proselytizing at one point. French goods did not suddenly replace Chinese wares.

But as MIT Associate Professor Kristel Smentek emphasizes, studying the art at the center of this intrigue is important too: The objects were the means by which the countries communicated. For one thing, the French could not visit the Chinese emperor without losing stature, something they were unwilling to do. The tapestries were thus a diplomatic communique. Furthermore, the countries exchanged more porcelain than letters or any written records; studying that opens up a world of technology and commerce to us as well.

“Beautiful, unusual objects that were made hundreds of years ago allow us a different point of access into the past,” says Smentek, an associate professor of art history in the Department of Architecture.

And what did the French think about the Chinese in 1765? Some scholars have contended these particular tapestries, depicting what they imagined to be Chinese scenes of leisure and court life, were condescending caricatures. Smentek finds little evidence for that view — and as she points out in a recently published article, the Chinese emperor built a new palace outside Beijing just to house the tapestries, hardly the reaction of someone who feels slighted.

“Bertin could have been naïve [about the art], but I don’t think he was,” Smentek says. “He would not have been one of five ministers of state without being shrewd.”

Close studies at the intersection of art and commerce are Smentek’s métier. An art historian, she received tenure at MIT last year, and her first book, published in 2014, dove into the rise of French art collecting in the 18th century.

Fittingly, Smentek’s own career has involved both academia and museums. She helps curate exhibitions, her undergraduate classes visit Boston’s museums, and her students create virtual exhibitions as class assignments. Grasping how art is collected and displayed, she says, helps us see it in new ways.

“An exhibition is an argument, but it’s conveyed differently, through objects and with much less text,” Smentek says. “It’s a very different endeavor, and very useful.”

Smentek grew up in Edmonton, Canada, and started college as a psychology major at the University of Alberta. Then she took a year off to travel in Europe, North Africa, and the Eastern Bloc states of the old Soviet Union.

“It was a fantastic experience,” Smentek says. “It was the kind of trip you can only do when you are 19 and don’t really care what you eat or where you sleep. I saw a lot of art, and I had a lot of time to think about what I wanted to do.”

When she came back to Canada, she chose an art history major at McGill University, in Montreal.

“I committed myself to art history,” Smentek says. She received her MA and PhD from the University of Delware, which allowed her to study both the 18th century and decorative arts, a pair of intellectual interests she has maintained throughout her career.

Smentek’s academic work was mixed in with stints in the museum world. She was a fellow for a year at the Metropolitan Museum of Art in New York, a fellow for two years at New York’s noted Frick Collection, and a doctoral fellow at the Center for Advanced Study in the Visual Arts at the National Gallery of Art in Washington for three years.

“It was eye-opening,” Smentek says of her time in the museum world, which helped sharpen her knowledge about the nexus of collecting, commerce, and art. “I got to see works of art in ways that many people don’t, and these experiences generated a whole series of questions.”

Smentek’s dissertation, which became her 2014 book, examined Pierre-Jean Mariette, a French dealer and collector in the 18th century whose career highlighted important changes in the art world.

For one thing, in Mariette’s time, art history itself became more powerful — or, Smentek puts it, “art itself became conceptualized as a way to access the past that texts didn’t really allow for.” Art collecting was also becoming more international; Mariette, in Paris, sold many works to Germany and other countries.

“Mariette’s career shows how connected these collectors and intellectuals were in the period, really transcending national boundaries to think collectively about history through art,” Smentek says.

On the other hand, Mariette did things that would leave art professionals aghast today, such as manipulating some of his old master drawings, filling in missing areas, remounting them, or even splitting double-sided drawings into two.

“Some of the things we associate with art now — its originality, its inviolability — those ideas were in formation then but hadn’t been consolidated,” Smentek notes.

Having completed that project, her second book is now focused on the France’s 18th-century interest in China and the global connections in art at the time — which is why she has been studying Bertin’s sly effort to flatter China with art. Smentek is currently on leave and has a fellowship from the American Council of Learned Societies, as she continues her research.

As Smentek sees it, the crossover of the university and the collecting world is becoming more common today: “There used to be a fairly pronounced split between the academy and museum world, but now there are more interactions between academics and museum people.”

Indeed, Smentek will also be co-curating an exhibition on the graphic arts and the Enlightment that will appear in the Harvard museums in 2019.

Given Boston’s noted museum collections, Smentek says, her students eagerly incorporate museum trips into their studies. She often teaches classes on collecting, and on art and money. Having been at MIT since 2008, she has found students to have a deep interest in art, even when majoring in engineering and science.

“The undergraduates in my classes come from anywhere across the Institute,” Smenek observes. “It’s a truly diverse, exciting mix and each student brings different ideas to the table.”

In one course Smentek was teaching recently, which covered early photography, “one of the students, who studied chemistry, had her own collections of daguerrotypes,” and brought some in. “There is no end of fascinating students here, from math majors, to programmers, to architecture students,” Smentek continues. “There’s a building boom in museums and some of the most spectacular recent buildings have been museums.”

All told, being an art historian at MIT means that “I’ve had to think well outside my comfort zone,” she says. “In the long term, that’s terrific. I’ve had to make my own work accessible to people coming from very different kinds of backgrounds. That’s been good. And in teaching, that’s essential.”

Studying art history “is a different way of engaging with contemporary life and the past,” Smentek says. “Thinking about the past gives you a perspective on the present that’s critical, whether you’re an engineer or biophysicist.”