One planet, many climate plans. Why? 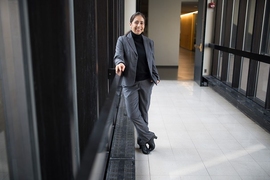 We have one planet, and many plans to keep it from getting too hot. Consider: There are more than 60 different greenhouse gas emissions pricing systems being used by countries and regions around the world, all intended to reduce the climate impact of burning fossil fuels.

In the abstract, it might be simpler to have a more unified set of policies in place, imposing costs on those producing emissions. But, as MIT Associate Professor Janelle Knox-Hayes has made a career observing, climate regulations are not developed in the abstract. The specific policies that countries adopt stem from the particular conditions they face.

So in the U.S., potential emissions-trading proposals were developed in concert with its huge financial sector; traders were even experimenting with collateralized securities based on carbon obligations (akin to mortgage-backed bonds) before the market crash of 2008. In Japan, by contrast, with less financialization and a greater emphasis on exporting material goods, the country’s emissions markets count clean-energy exports as an offset against domestic carbon emissions.

“I think for most people emissions markets are an abstract concept,” Knox-Hayes says. Thus much of her work involves “understanding the cultural dimensions of markets,” as she puts it.

That includes a 2016 book on the subject, many published research articles, and a new research project that has taken her to Iceland, where Knox-Hayes is studying social values as they relate to climate issues. In the future, she hopes to map the attitudes and values among residents in other parts of the Arctic Circle, an area targeted for more oil exploration.

“I think there can be more comprehensive ways of understanding the makeup of social values,” Knox-Hayes says, adding that we need to relate policy discussions to  “all the reasons people care about the environment in the first place.”

For this kind of innovative research and for her teaching, Knox-Hayes was awarded tenure by MIT earlier this year. She is currently the Lister Brothers Associate Professor of Economic Geography and Planning in the Department of Urban Studies and Planning, and co-head of the Environmental and Policy Planning Group.

Knox-Hayes grew up in Cortez, Colorado, a relatively isolated town in the state’s Four Corners area.

“It’s a remote place, but it’s also very beautiful,” Knox-Hayes says. “You’re just surrounded by the natural landscape out there, and I think that’s where my interest in the natural environment and environmental policy and conservation came from.”

As an undergraduate, Knox-Hayes attended the University of Colorado and graduated with a triple major, studying ecology, Japanese languages and civilization, and international relations.

“I wanted a bit of an interdisciplinary focus,” explains Knox-Hayes, in a bit of an understatement.

She was awarded a graduate scholarship at Oxford University in England, where, working with advisor Gordon Clark, she began “trying to understand the intersection of finance and environmental conservation.” That became the subject of her dissertation and then her book, “The Cultures of Markets,” published by Oxford University Press in 2016.

The book looked closely at six countries or regions with emissions markets: the U.S., Europe, Australia, South Korea, Japan, and China. Having an Asian focus in the book became a necessity after the economic recession and financial-market crisis of 2007–2009, which Knox-Hayes regards as an important reason why no federal emissions policy was adopted in the U.S.

“The momentum just shifted East [to Asia],” Knox-Hayes says. “So I was really interested in this phenomenon. I wanted to study what it means to transfer an institution to different cultural contexts.”

To be clear, Knox-Hayes does not regard emissions markets as the most powerful tool we have for building a sustainable energy future. If somehow countries could quickly switch to an all-renewables future by fiat, well, that would be more effective in a shorter time. But emissions markets are a popular option given the highly developed structures of finance.

“Emissions markets have been the most viable political reality,” Knox-Hayes says. “The reason it is a catchy idea is because of the allure that markets promise: You can conserve the natural environment and have as much growth as you like.”

Beyond her first book, Knox-Hayes has begun research, sponsored by the Icelandic Fulbright Commission, on a new project that looks more principally at the core social values underpinning policy initiatives in the Arctic — something that has taken her to Iceland on multiple occasions, including once on a Fulbright scholarship.

Knox-Hayes is attempting to chart, in granular detail, both the climate-related values people hold in Iceland and the geographical distribution of those values.

“It’s not just what the values are, but where the values are,” Knox-Hayes says. “It would be fantastic to go around the Arctic mapping values as a way to say, these are the things people care about. Iceland is a pilot project. … I think it’s a nice way to develop the methodology.”

Precisely because the Arctic is contested terrain — an oil-rich area where multiple countries are trying to develop drilling, but where some indigenous peoples are wary of changes to their habitat — it might be a particularly apt place to explore how people form their views about nature, and for what reasons.

Sometimes in policy discussions, Knox-Hayes observes, “We talk about climate change in terms of technocratic governance and scientific norms [and] there’s no emotional connection, no cognitive association. It’s difficult to then try to relate [climate] to other things that are emotionally connected to it.”

She adds: “Arguments vested in emotion carry a lot more weight. That may be a necessary component of building policy for the public.”