How to float your coffee creamer 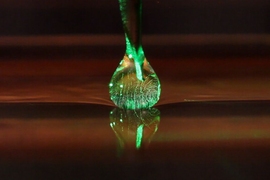 ↓ Download Image
Caption: Visualization of vortices in a drop of silicone oil sitting on a warm bath. The temperature difference generates a recirculating flow that is visualized by shining a green laser light on fluorescent particles that are added as passive tracers within the drop.
Credits: Courtesy of the researchers 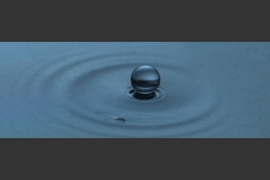 ↓ Download Image
Caption: A drop of silicone oil “levitating” on a bath of liquid.
Credits: Courtesy of the researchers

Caption:
Visualization of vortices in a drop of silicone oil sitting on a warm bath. The temperature difference generates a recirculating flow that is visualized by shining a green laser light on fluorescent particles that are added as passive tracers within the drop.
Credits:
Courtesy of the researchers

Caption:
A drop of silicone oil “levitating” on a bath of liquid.
Credits:
Courtesy of the researchers

A drop or two of cold cream in hot coffee can go a long way toward improving one’s morning. But what if the two liquids didn’t mix?

MIT scientists have now explained why under certain conditions a droplet of liquid should not coalesce with the liquid surface below. If the droplet is very cold, and the bath sufficiently hot, then the droplet should “levitate” on the bath’s surface, as a result of the flows induced by the temperature difference.

The team’s results, published in the Journal of Fluid Mechanics, offer a detailed, mathematical understanding of drop coalescence, which can be observed in everday phenomena, from milk poured in coffee to raindrops skittering across puddles, and sprays created in surf zones.

The results may help researchers understand how biological or chemical substances are spread by rain or other sprays in nature. They could also serve as a guide for droplet-based designs, such as in microfluidic chips, in which droplets carrying various reagents can be designed to mix only in certain locations in a chip, at certain temperatures. With this new understanding, researchers could also engineer droplets to act as mechanical ball bearings in zero-gravity environments.

“Based on our new theory, engineers can determine what is the initial critical temperature difference they need to maintain two drops separately, and what is the maximum weight that a bearing constructed from these levitating drops would be able to sustain,” says Michela Geri, a graduate student in MIT’s Department of Mechanical Engineering and the study’s lead author. “If you have a fundamental understanding, you can start designing things the way you want them to work.”

Geri’s co-authors are Bavand Keshavarz, a lecturer in mechanical engineering, John Bush, professor of applied mathematics in MIT’s Department of Mathematics, and Gareth McKinley, the School of Engineering Professor of Teaching Innovation.

The team’s results grew out of a question that Bush posed in his graduate course 18.357 (Interfacial Phenomena): Why should a temperature difference play a role in a droplet’s coalescence, or mixing?

Geri, who was taking the course at the time, took on the challenge, first by carrying out a series of experiments in McKinley’s lab.

She built a small box, about the size of an espresso cup, with acrylic walls and a metal floor, which she placed on a hot/cold plate. She filled the cube with a bath of silicone oil, and just above the surface of the bath she set a syringe through which she pumped droplets of silicone oil of the same viscosity. In each series of experiments, she set the temperature of the hot/cold plate, and measured the temperatures of the oil pumped through the syringe and at the surface of the bath.

Geri used a high-speed camera to record each droplet, at 2,000 frames per second, from the time it was released from the syringe to the time at which it mixed thoroughly with the bath. She performed this experiment using silicone oils with a range of viscosities, from water-like to 500 times thicker.

Coalescence of a drop of cream into a bath of hot coffee. (Courtesy of the researchers)

She found that droplets appeared to levitate on a bath’s surface as the temperature gradient between the two fluids increased. She was able to levitate a droplet, delaying its coalescence, by as long as 10 seconds, by maintaining a temperature difference of up to 30 degrees Celsius, or 86 degrees Fahrenheit, comparable to the difference between a drop of cold milk on a bath of hot black coffee.

“We saw this relationship clearly in the lab and then tried to develop a theory in hopes of rationalizing that dependence,” Geri says.

Visualization of recirculation vortices in the pending drop that is sitting on a warm bath. The temperature difference generates a recirculating flow that is visualized by shining a green laser light to the fluorescent particles that are added as passive tracers for sake of flow visualization. (Courtesy of the researchers)

The team first looked to characterize the layer of air separating the droplet from the bath. The researchers hypothesized that a temperature difference between the two fluids may influence this air cushion, which may in turn act to keep a droplet afloat.

To investigate this idea mathematically, the researchers performed a calculation, referred to in fluid mechanics as a lubrication analysis, in which they appropriately simplified the complex equations describing fluid motion, to describe the flow of air between the droplet and the bath.

Through these equations, they found that temperature differences between the fluid drop and the fluid bath create convection, or circulating currents in the intervening layer of air. The greater the temperature difference, the stronger the air currents, and the greater the pressure that pushes against the droplet’s weight, preventing it from sinking and making contact with the bath.

Inside a single drop

Next, the team looked for a mathematical explanation for why they observed the 2:3 relationship between the amount of time a droplet levitates on a liquid surface and the initial temperature difference between the two fluids.

“With a temperature difference, you generate a flow inside the drop, drawing up heat from the bath, which circulates around until the droplet temperature is the same as the bath and you don’t levitate anymore,” Bush adds. “We were able to describe that process mathematically.”

To do so, the researchers adapted another set of equations, which describe the mixing of two fluids. They used the equations to model a warm parcel of liquid within the droplet that has been warmed by the bath below. They were able to characterize how that parcel of liquid mixed with the colder portions of the droplet, warming the entire droplet over time.

Through this modeling, they could observe how the temperature difference between fluids decreased over time, to the point at which a droplet stopped levitating and ultimately mixed with the rest of the bath.

“If you study that process mathematically, you can show the way in which temperature is changing in the droplet over time is exactly with this power law of 2/3 that we observed in our experiments,” Geri says.

Bush says that their results can be used to characterize the spread of certain chemical and biological agents that are transferred through raindrops and sprays.

“There are a lot of biological and chemical mixing events that involve droplet interactions, including in the surf zone, with waves breaking and small drops flying everywhere, and in hot tubs, with bubbles bursting and releasing droplets that skitter along the surface,” Bush says. “The rate at which these agents mix will depend on how long drops stay afloat before coalescing. Now we know that depends on temperature, and we can say exactly how.”

This research was supported, in part, by the National Science Foundation and MIT Energy Initiative through the Energy Fellowship Program.